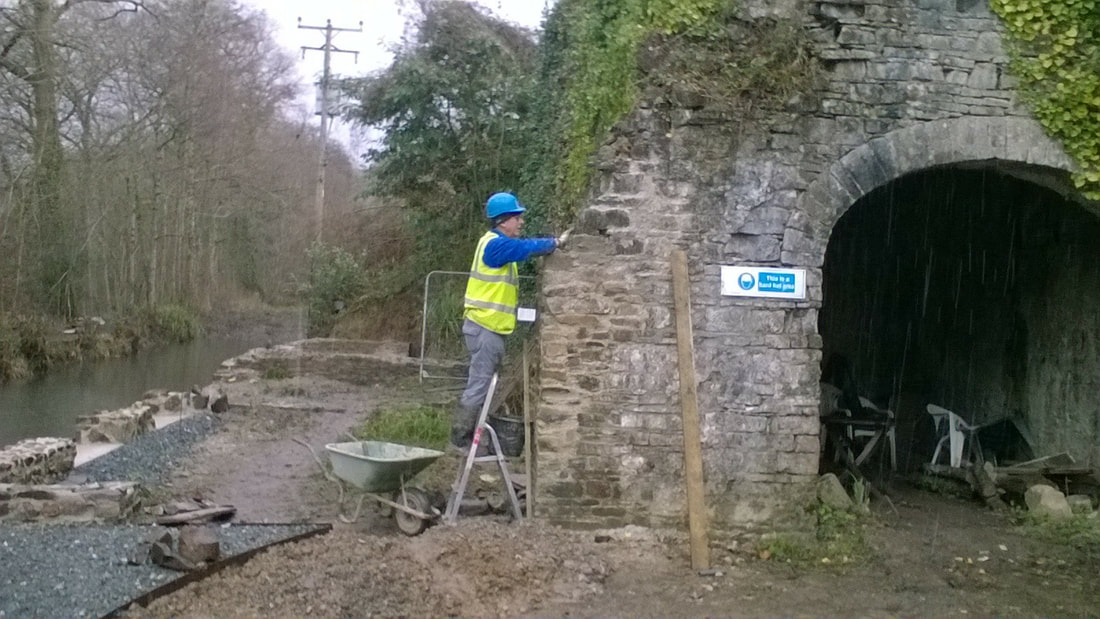 Wintry conditions and a depleted team of volunteers meant that we could only make limited progress this week.

Now that much of the work on the canal basin itself has been completed, we want to spend some time carrying out repairs to the fabric of the lime kiln. The stonework, particularly on some of the corners is in poor condition and needs urgent attention. We have also decided to repair the southern arch of the kiln. To do this, we will erect a wooden frame to support the new stonework. This task could be quite challenging but we feel it is worth spending some time on this to get it right as it will be a highly visible aspect of the kiln when the site is open to the public.

Elsewhere, work continued on re-building wall foundations and digging a channel to drain water from the 'pit' adjacent to the lime kiln. There is a substantial deposit of clay here which retains rainwater very effectively. This needs to be drained before the area can be infilled with topsoil and landscaped.

​Generally, working parties are held every Wednesday morning, meeting in the main car park at RHS Rosemoor, Torrington at 9.30am. New volunteers are always welcome. 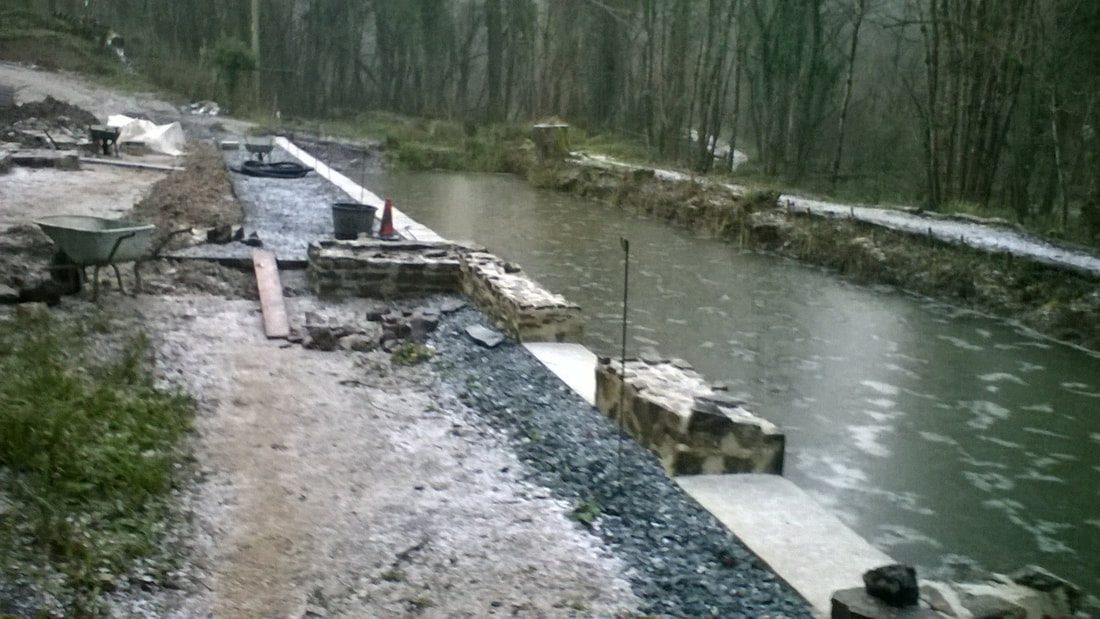 ​Progress was made in a number of areas this week.
​
One team continued to remove earth from behind the wall of the lime kiln chamber. This revealed a mass of rubble and stone which we think may be the remains of the demolished tower. The good stone was separated for future use and the spoil deposited along the edge of the canalside path for support. The excavation revealed more of the rear wall of the chamber which seems to extend further into the bank and may well be the base of the tower itself. As noted in last week's report, there is a limit to what we can achieve here as there are many tons of earth to be removed which would require the use of heavy machinery. 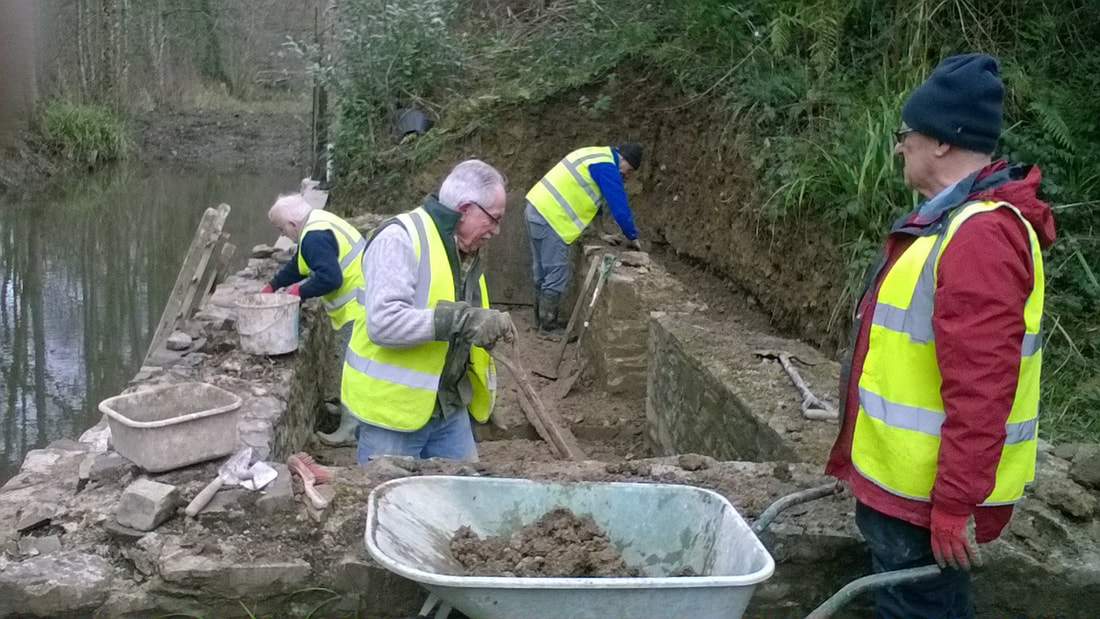 While working in this area, we also repaired and restored the outer wall of the chamber which fronts the canal. Elsewhere, work continued to build up the foundation walls to define the original layout of the site.
At lunchtime, we were surprised to see that our resident robin had been joined by a second. This is unusual as robins are generally very territorial. For the moment, they seem to be co-existing harmoniously but we will see how the relationship develops in future weeks!
​
Generally, working parties are held every Wednesday morning, meeting in the main car park at RHS Rosemoor, Torrington at 9.30am. New volunteers are always welcome.
ROSEMOOR RESTORATION REPORT FROM TONY NICHOLLS  -  16th January 2019

This week we worked on two separate areas of the site. One team continued to excavate earth from behind the chamber we uncovered last year. There appears to be a wall here which runs back at 90° to the rear wall into the earth bank and we believe this might be part of the tower.  Removing the remaining earth would be a huge undertaking and may not be feasible for our small team of volunteers. However, this is a fascinating part of the original structure which merits further attention. Spoil removed from the excavation was used to support the back of the canalside path. 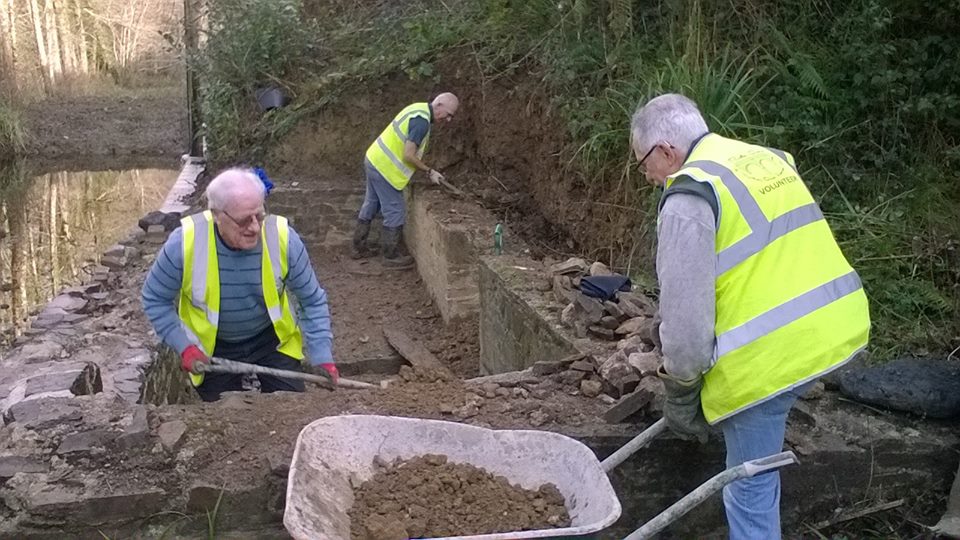 The second team worked on building up the foundation of the section of external wall which we commenced at the end of last year. This was then topped off with rough stone and will provide a good indication of the layout of the original structure. We hope that RHS Rosemoor will be back on site soon to finish levelling this area and to put down a layer of topsoil which will allow for grassing/hedging etc. as part of the final design of the site.

​There is a large deposit of clay adjacent to the lime kiln wall beneath which there appears to be the remains of a wooden floor. It would be extremely difficult to excavate this area fully given the extent of the clay deposit so the floor will have to be re-buried in due course. We have, however, taken photographs for our archive.
ROSEMOOR RESTORATION REPORT FROM MICHAEL ELLIOTT  -  2nd January 2019

A better than expected turnout arrived to admire the results of the work of the previous year. There is quite a contrast from just a year before. 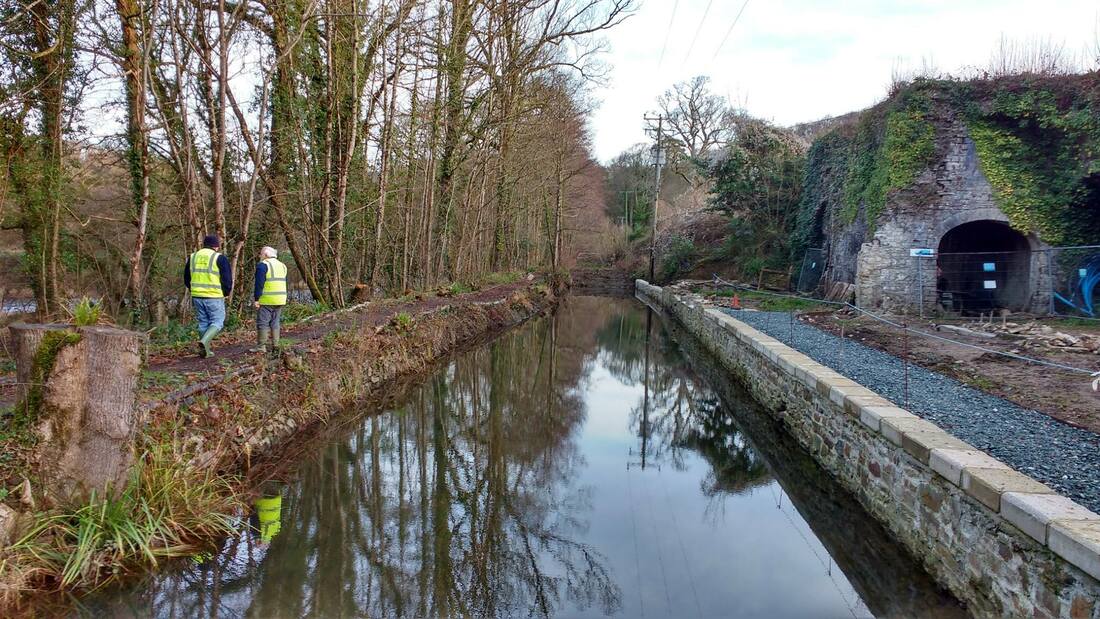 The water level, stretching along the whole length, had obviously been up to the top of the spillway during the wetter weather earlier in the holiday period. The team then set to work mixing mortar, tidying up the end of the path, on re-establishing the outline of the former limekiln structure, and digging out the walls of the far chamber.