RACING AHEAD AT SEA LOCK by Adrian Wills 28th August 2021

This week has witnessed a tremendous leap forward in the reconstruction of the middle wharf wall at Sea Lock.
​
On Tuesday, Ryan, contractor excavator driver, arrived and dug out the higher terrace required for the second level of gabion baskets which he did very quickly and efficiently.  Joined by Steve again, he and I initially moved a few things around the site and then removed the spoils from the new excavation  before beginning the arduous task of filling the newly installed baskets. Steve is a skilled tractor and trailer driver which has proved to be very useful.  By the end of the day we had managed to half-fill the baskets but were well-pleased with our efforts. 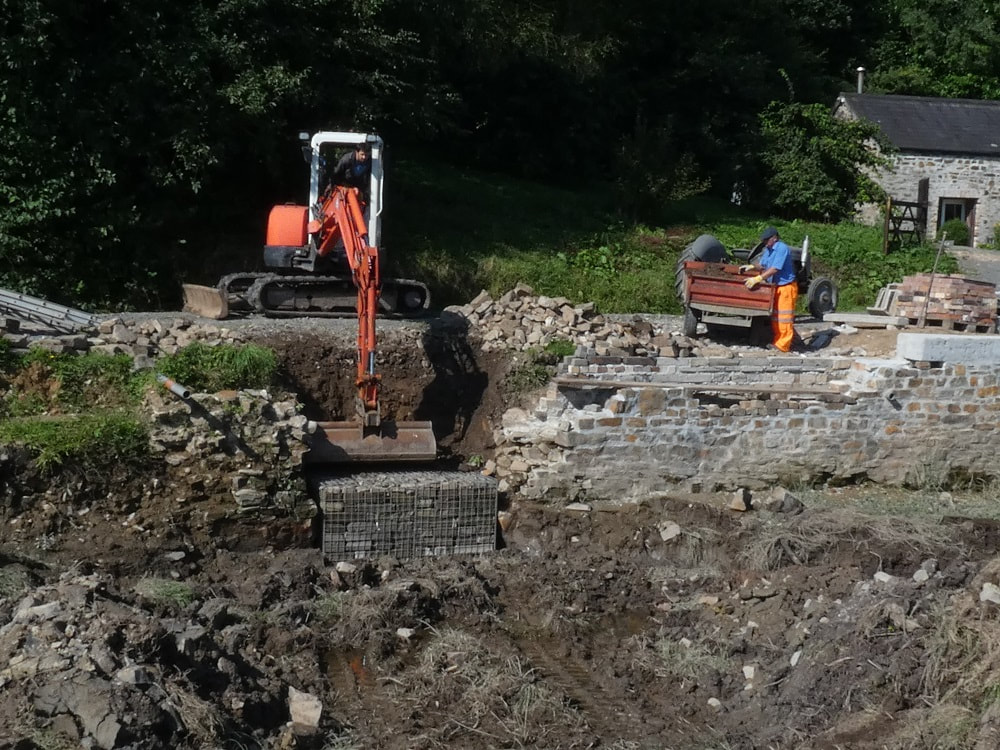 The following day Trevor and I managed to completely fill the baskets with time spare to set about building up the back of the wall across them..  Utilizing a combination of salvaged lintels, old railway concrete fence posts, bricks and concrete blocks, the wall was soon completed to the required height, right across the gabions bridging the breach.  Trying to line up the new section of wall with the old has not been straight-forward, literally and metaphorically so it is a little bit curved but as a retired mason and old friend of mine would say, “It’s rough, but strong!” Still with time in hand we decided to begin filling the hollow behind the new wall and track with hard core.  I suggested to Trevor that we fill the hollow using the old dumper truck so I got out the Kubota tractor to use its front-end loader to fill the dumper from a pile of back-fill on the far end of the site.

Not intending to take me literally, Trevor got the dumper truck with its first full load, too close to the edge of the pit and the dumper slipped in..  Its brakes are not very good. Fortunately it stopped without touching the still, very soft new wall which it otherwise would have easily demolished.
​
Using the back-hoe of the Kubota, firmly anchored on the track behind, we eventually and without further mishap, managed to extricate the dumper, empty it and finished the day with 2 further loads deposited. 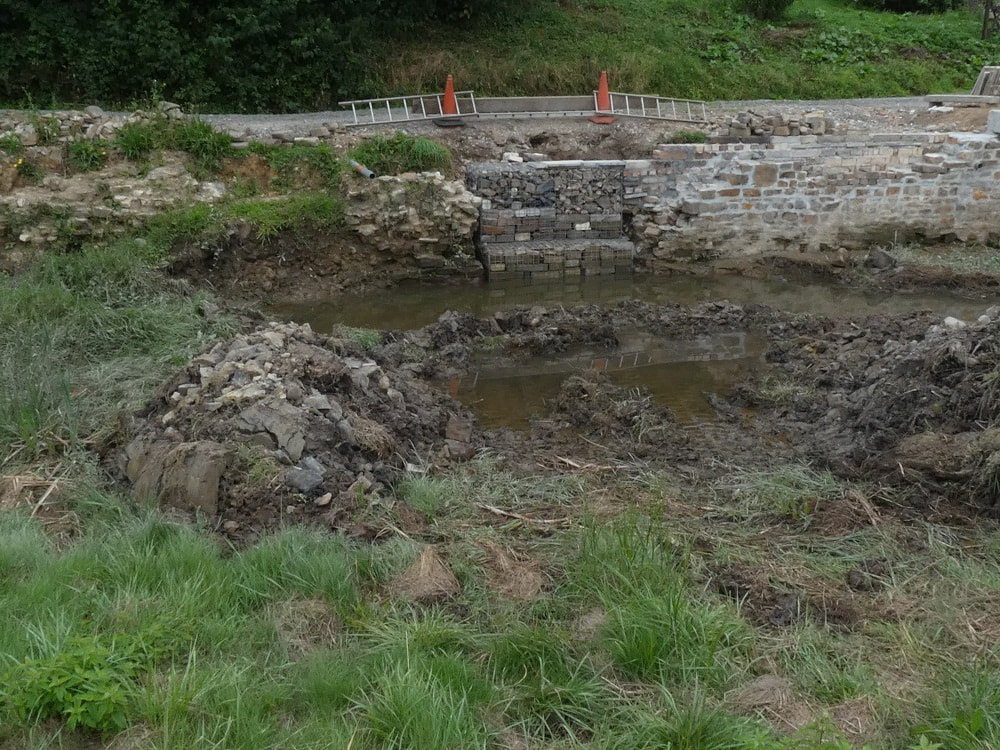 ​On Thursday Trevor and I completed filling and tamping down the pit. It has been quite an eye-opener observing how much material filling this breach has consumed. And it still has its face to be constructed but what a step forward has been achieved!. 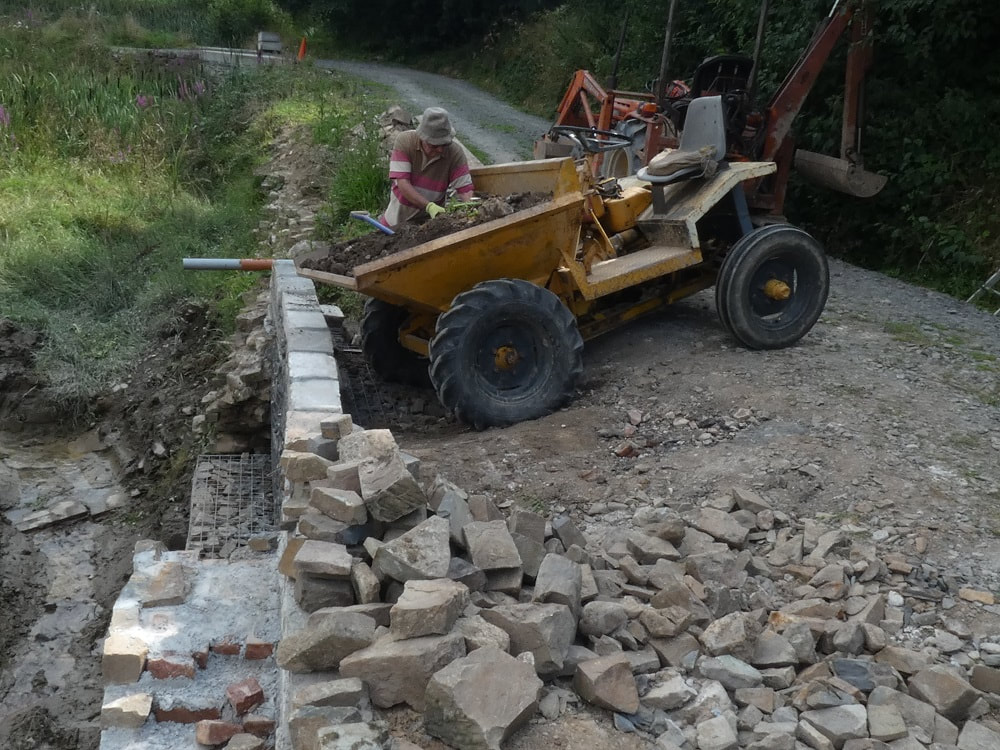 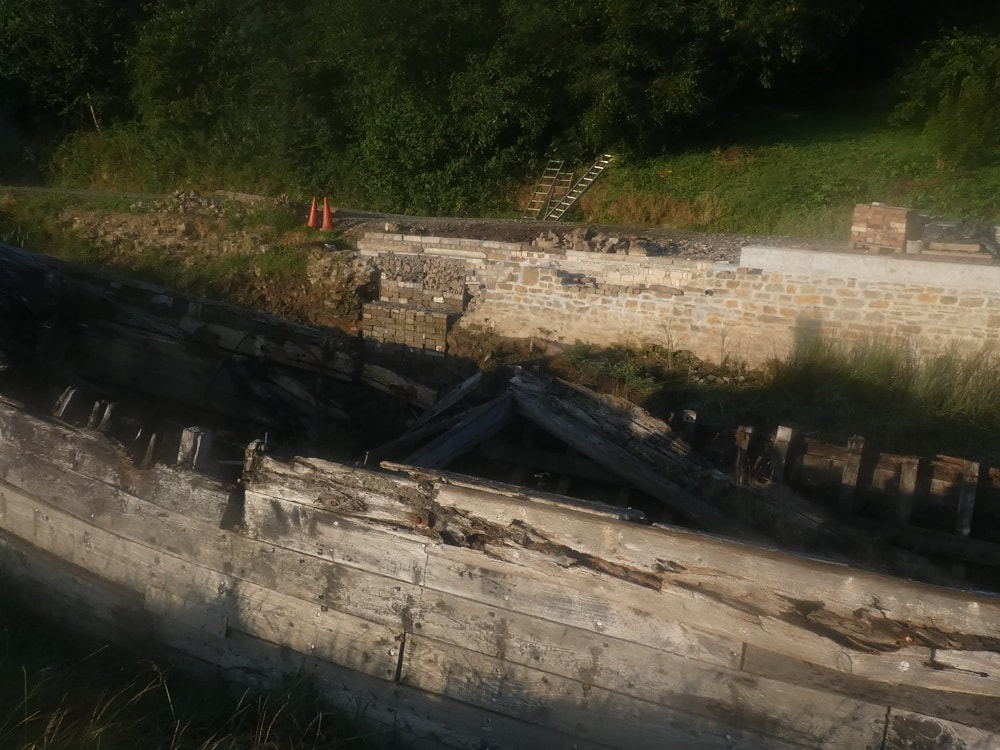 This week started with shipwright Brian sawing a section of oak to make another tread protector using a newly sharpened saw from home. The timber was then fitted into the holes on either side of a bottom step and mortared into place. Attention then turned to uncovering the corner of the wall where the canal narrows opposite the tucking mill. There was a definite corner and base to the wall, but it was all rather a mystery, as the wider section also seemed to continue, suggesting the canal might have originally been wider for longer, or perhaps there was a building on this side of the canal. After reflection it was decided to stick with the line of the wall decided last week. Progress was then rapid with the benefit of some large stones dug out of the bank and canal bed. 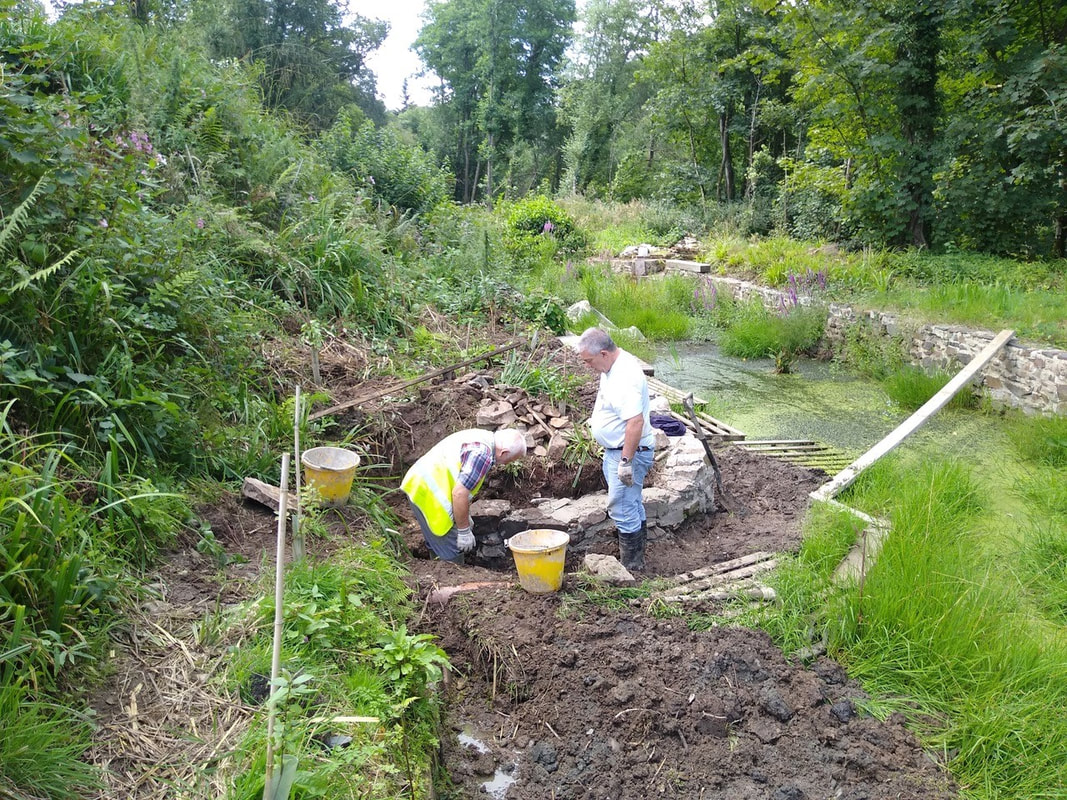 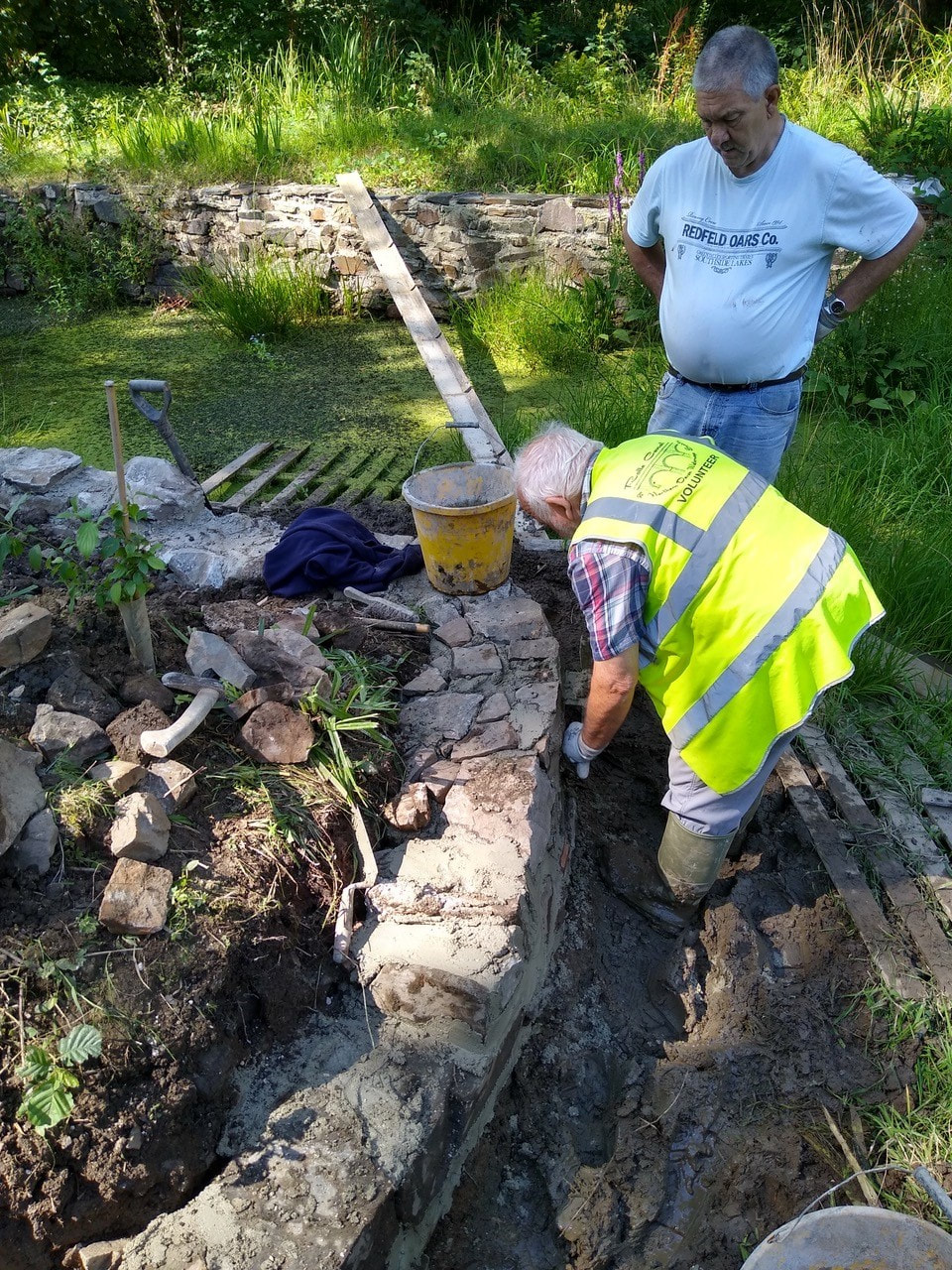 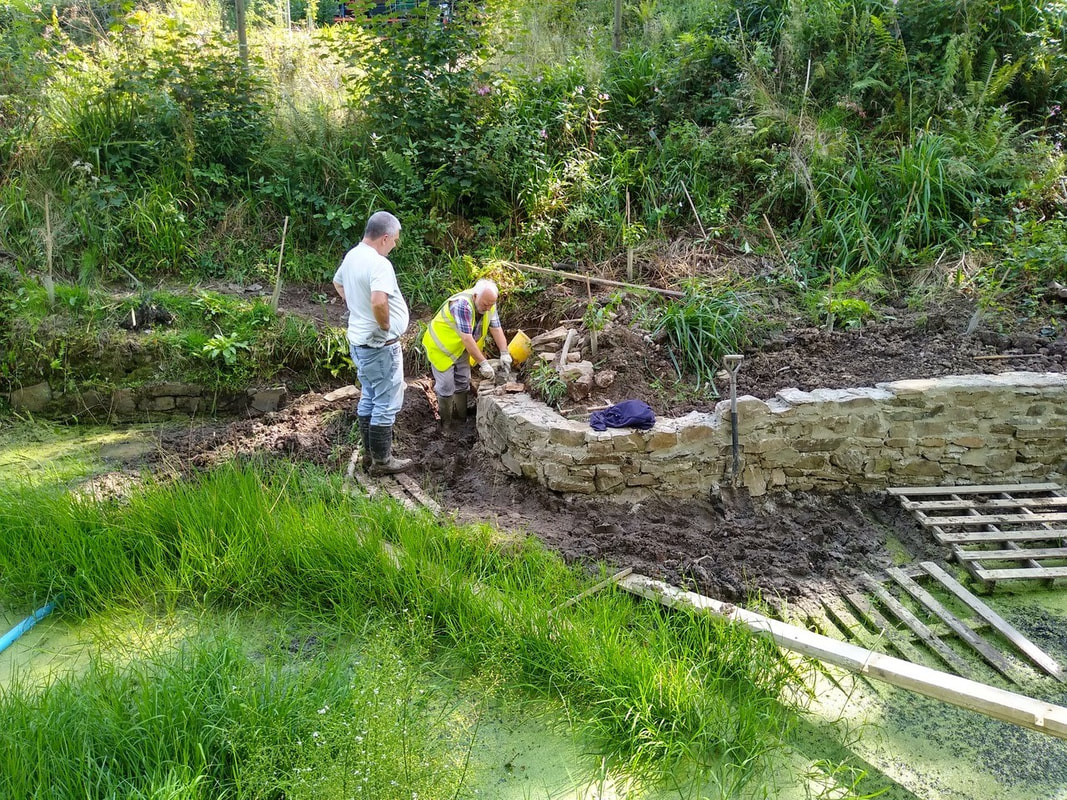 Assemble at the temporary car-park next to the Annery Lime kilns for a guided walk along the canal to Sea Lock. This is an opportunity to see the restoration work on the lock, where in the nineteenth century, river barges could enter the canal basin from the tidal Torridge estuary. A specially constructed traditional canal-side building houses an archive of photographs and canal artefacts.

Meet at 2.30pm at Annery Kiln.
Walk Leader: Adrian Wills.
Distance less than 2 miles.
Stout footwear is recommended and a contribution of £2pp is requested.
Dogs are not allowed. 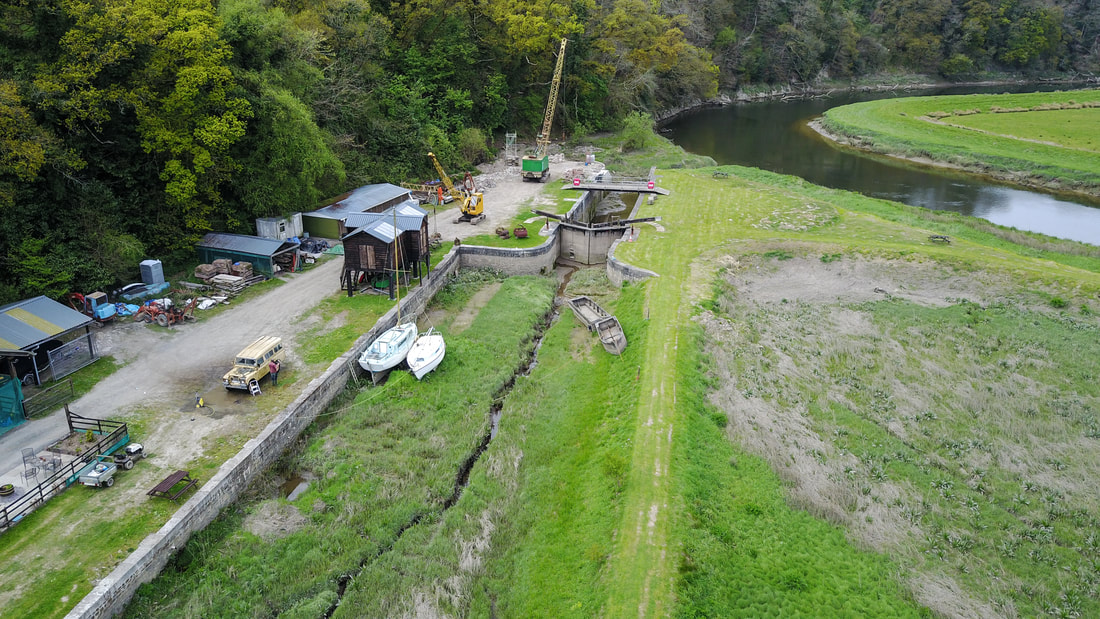 The Rosemoor working party started by taking levels from the wharf wall using a water level made from a length of tube. The sharp-eyed forensic pathologists will spot the knife cruelly embedded in the base of the electricity pole. This marks a level 38 inches above the coping stones. Further levels established that the wall opposite the tucking mill is about the right height to receive its coping, and so worked focussed on lengthening the wall. ​ 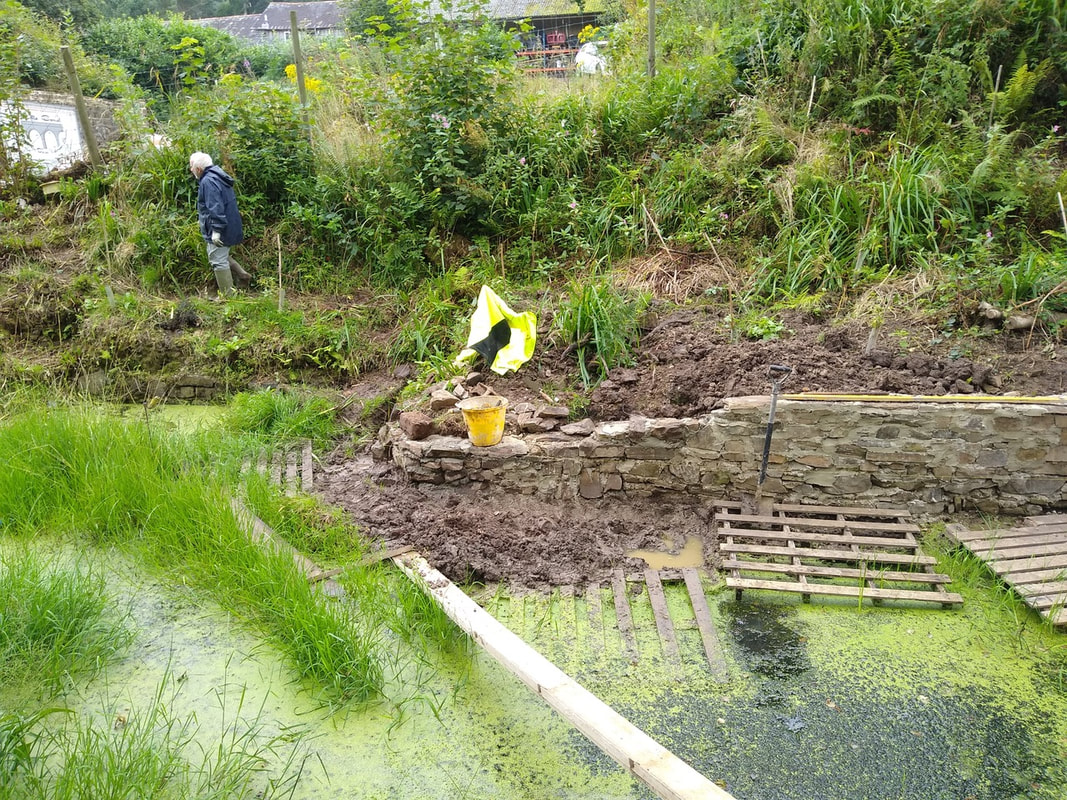 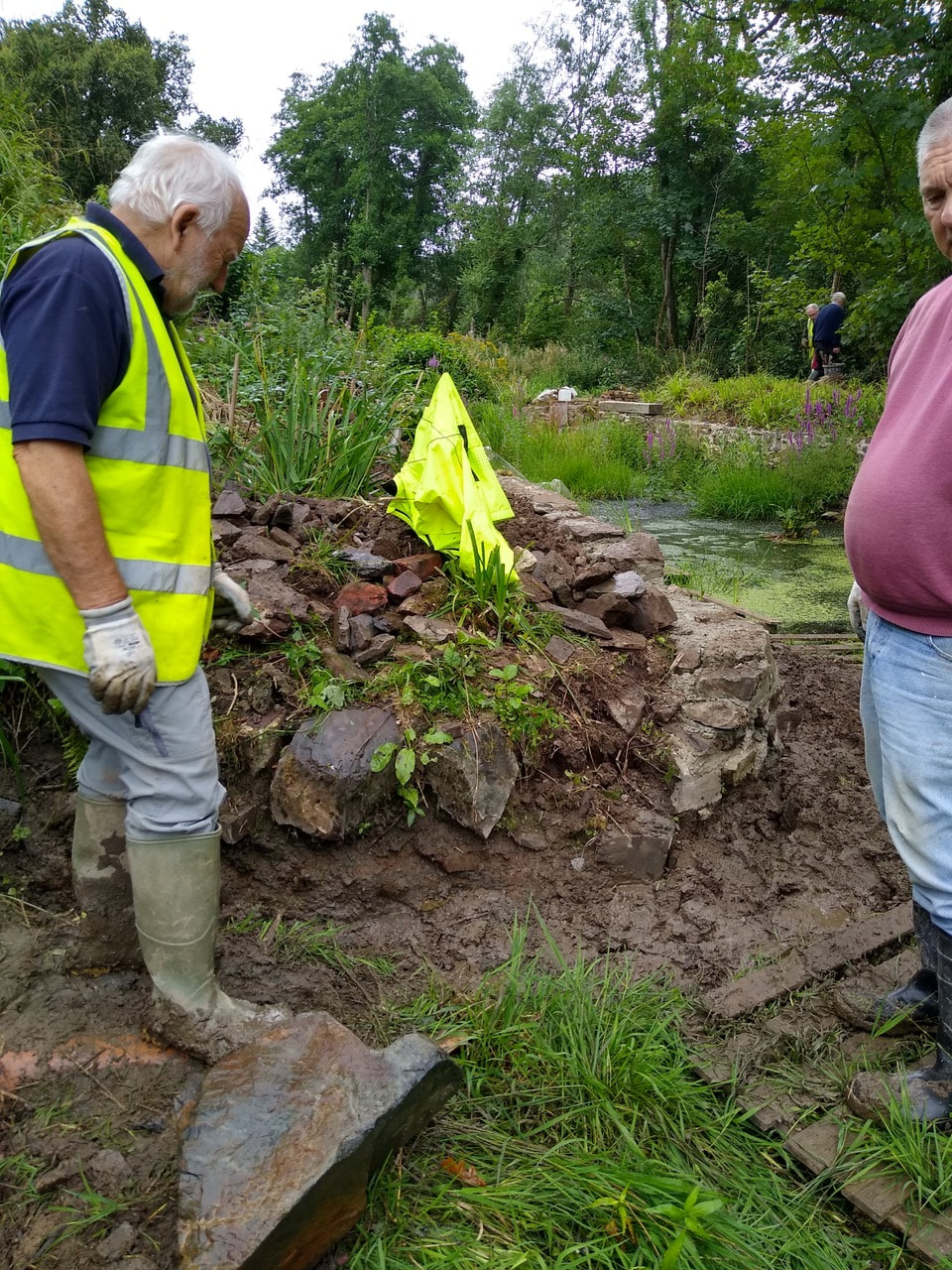 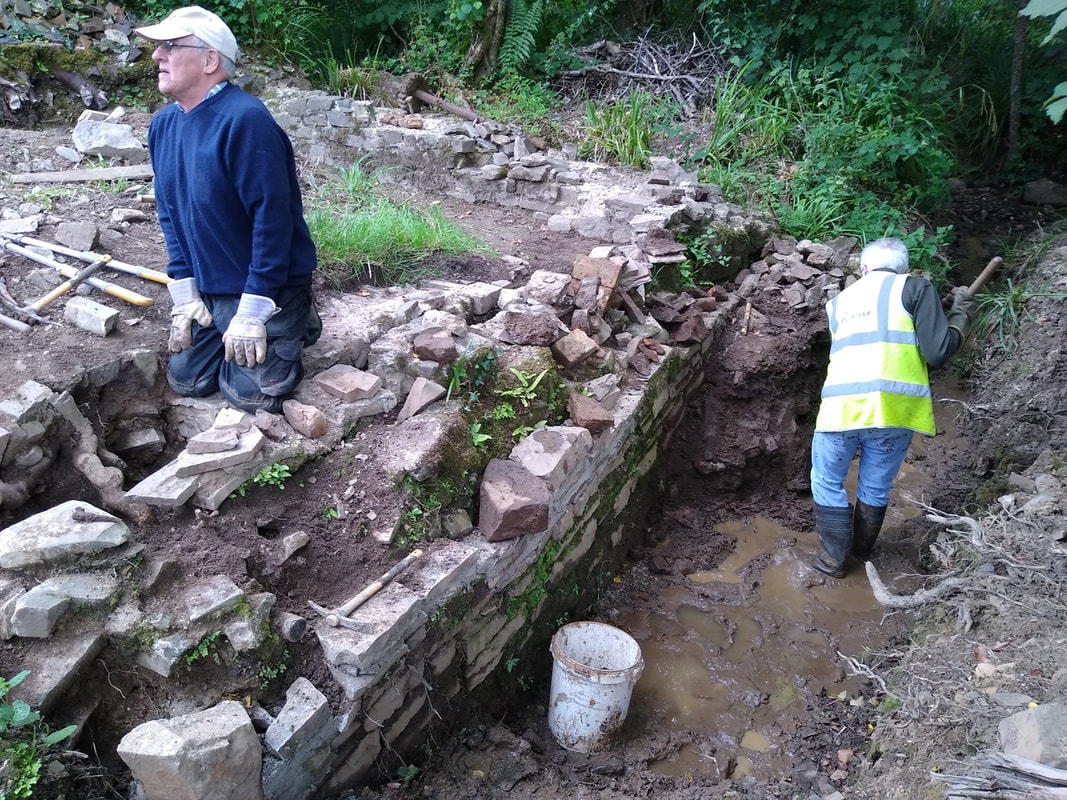 I was joined again by Trevor at Sea Lock and we continued filling the gabion baskets which Steve and I had started the day before. Between the 2 of us, we eventually satisfied the baskets’ almost insatiable hunger for more infill and we then closed and wired the lid down. We had used up approximately 2 tons of assorted hard-core material.

With a nice firm platform to stand on we then started removing subsoil from above and behind the baskets where the second, stepped back layer is to be placed.
In selecting random stones for infilling, from the pile on the side of the track above the baskets I had already disturbed a large toad which was hiding in amongst them.  I captured the little beast and removed it to a place where he/she was unlikely to be disturbed again.

Later when digging above and behind the baskets, Trevor discovered another one which promptly retreated back into hole in which he/she was hiding.  This was not good because this was where we were demolishing the bank.

Trevor went to make a cup of tea by which point the toad had turned itself around and was peering out of its hole to see who had disturbed it.
Managing to get a small stick in behind it I was able to persuade it to evacuate its hole, capture it and also take it to a place of safety.
By the time we had finished our tea we had had enough of digging and resorted to replacing a pile of bricks which, like so many things on the site, had been put in a place where it was in the way. Such is always the case!

​Anyway, this was a very satisfying and productive, day’s work. Great progress is being made.
NEW KID ON THE BLOCK(s) AT SEA LOCK by Adrian Wills - 18th August 2021

The arrival of Steve, a new volunteer, at Sea Lock yesterday saved me from once again becoming Johnny-No-Mates since my usual 2 Tuesday companions were both unavailable to help, at the last moment, due to unforeseen circumstances.

Having shown Steve around the site and explained the various jobs that need attending to we soon started work on filling the 2 gabion baskets laid the day before. Initially we mixed several barrow-loads of concrete and shovelled it into the baskets to provide a firm and level surface, and then began the laborious task of filling them with reclaimed concrete blocks.  Since the blocks were slightly odd shaped and broken, this was something of a jigsaw puzzle exercise.  Getting the blocks down into the baskets was also taxing.  With me standing down inside the baskets Steve slid the concrete blocks down a scaffold plank to where I could reach them. 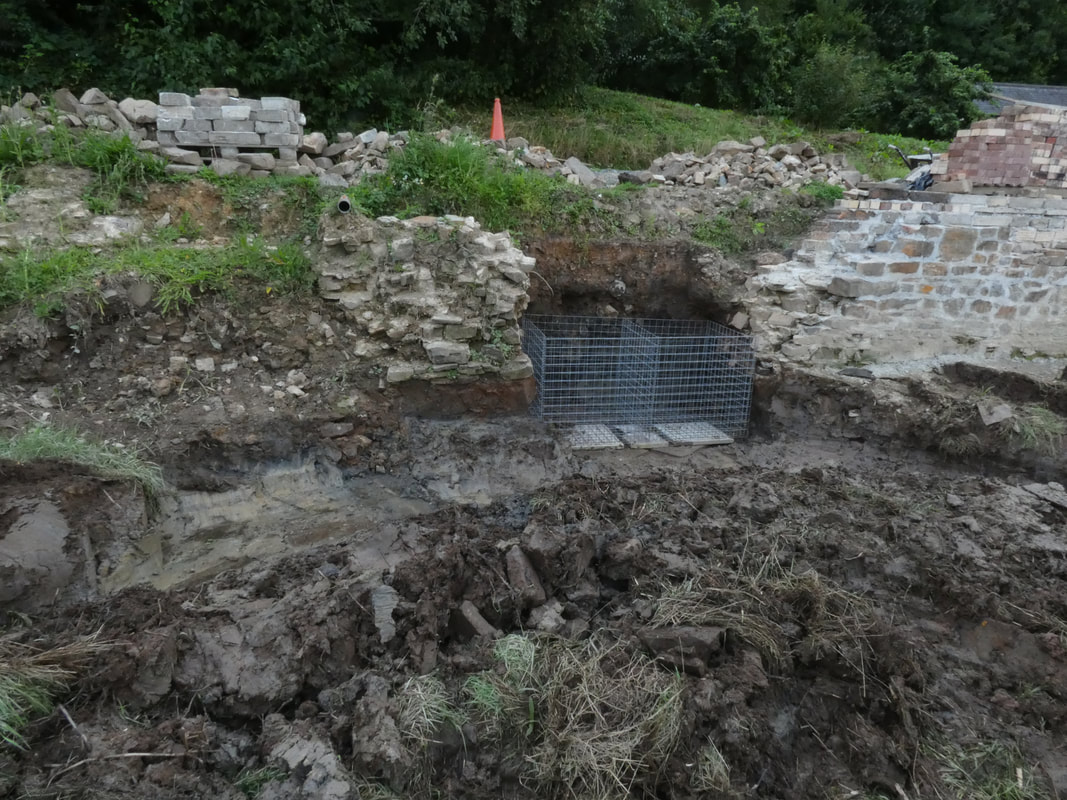 By the end of the day we were both suffering from tired backs and arms.  The 2 baskets were about half-filled at this time which seemed a little like bottomless pits in that a substantial amount of blocks and old bricks had been swallowed up by them.
​
I had thought that I had a plentiful supply of old blocks for this purpose but bearing in mind there are at least another six baskets of the same capacity, each 2 cubic metres, to fill I’m now not so sure! 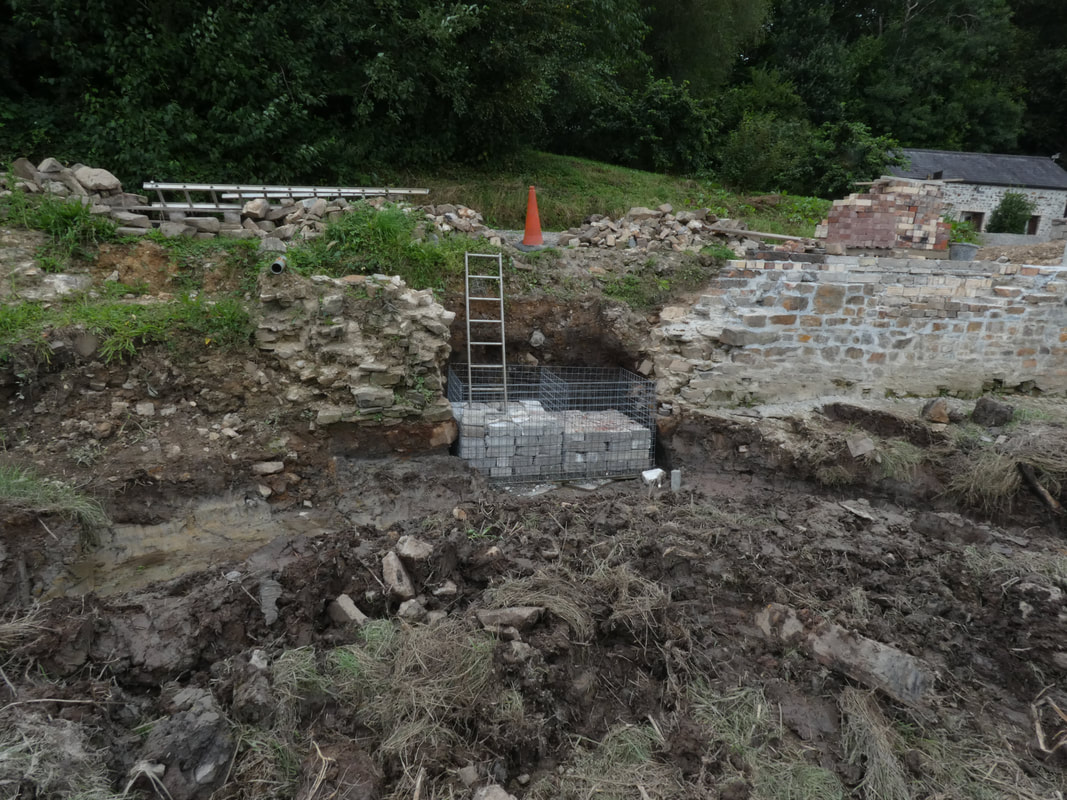 Dead and buried - But not very deeply!

The restoration of the middle section of the wharf wall at Sea Lock made a great step forward yesterday.  The contractor (somewhat lighter in pocket) employed to clean out the gaps where the gabions are to be laid, finally arrived, with his digger.  Work on this task was supposed to start two weeks ago but unfortunately the tracks on the digger were found to be badly worn and had to be replaced, at considerable cost, and new drive sprockets fitted before the machine could be safely used again. 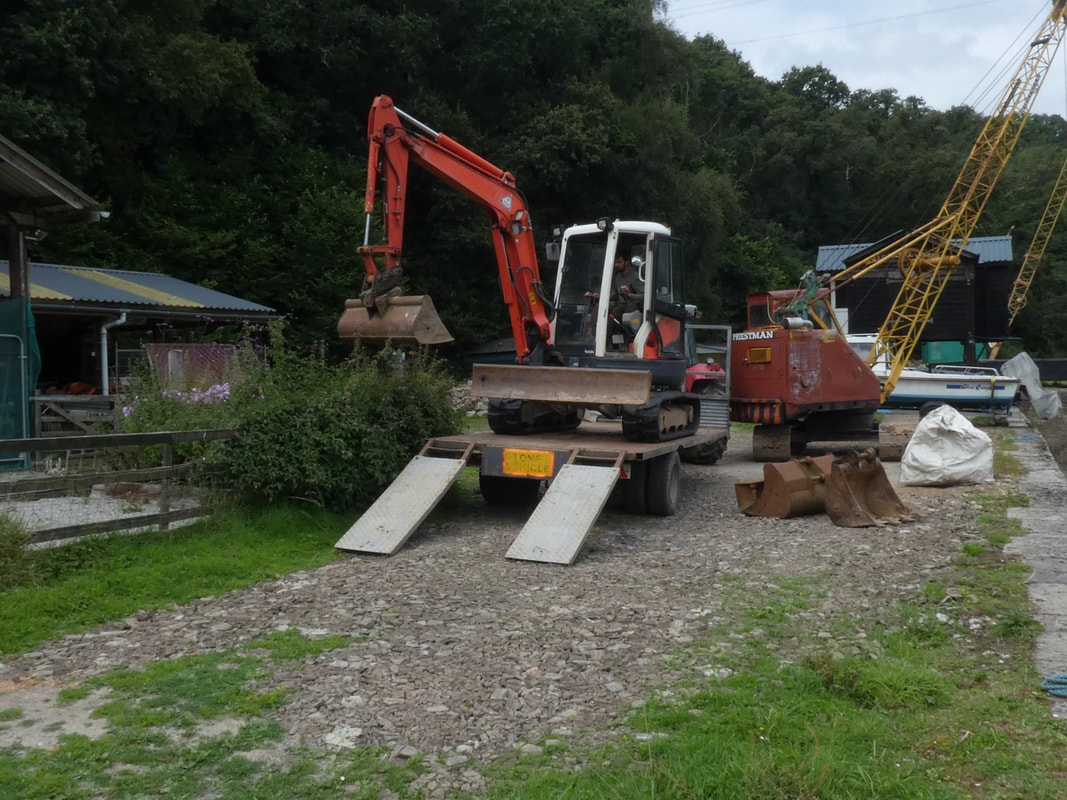 ​Once on site the contractor quickly set to digging a trench along the middle of the silted up wharf basin in order to redirect the stream running through it away from where he needed to be. 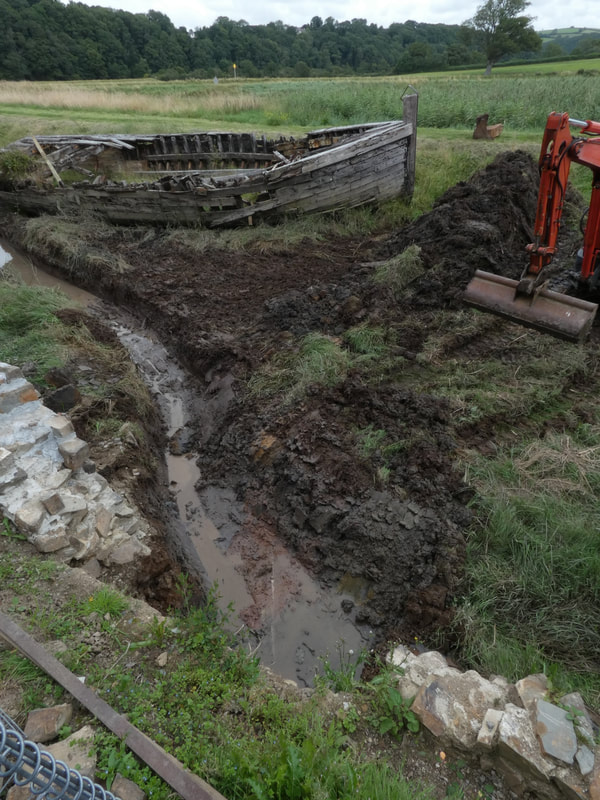 ​Within a very short time this was achieved and he then gave his attention to levelling the first gap. Having dug down to more or less where we wanted to be, the digger hit something quite hard.  At first it was thought that may be this was either a very large rock or even a coping stone.  After investigation, using a hand shovel, it was revealed to be concrete and the word ELECTRICITY was written in it.
This was obviously the protective covering one of the two underground high voltage electricity cables which were laid through the breach back in the 1960s.  It was my understanding that they had been laid considerably deeper than this was found to be!  Fortunately no damage was done to the concrete sheath and the power to these cables has been disconnected anyway. (I hope!) 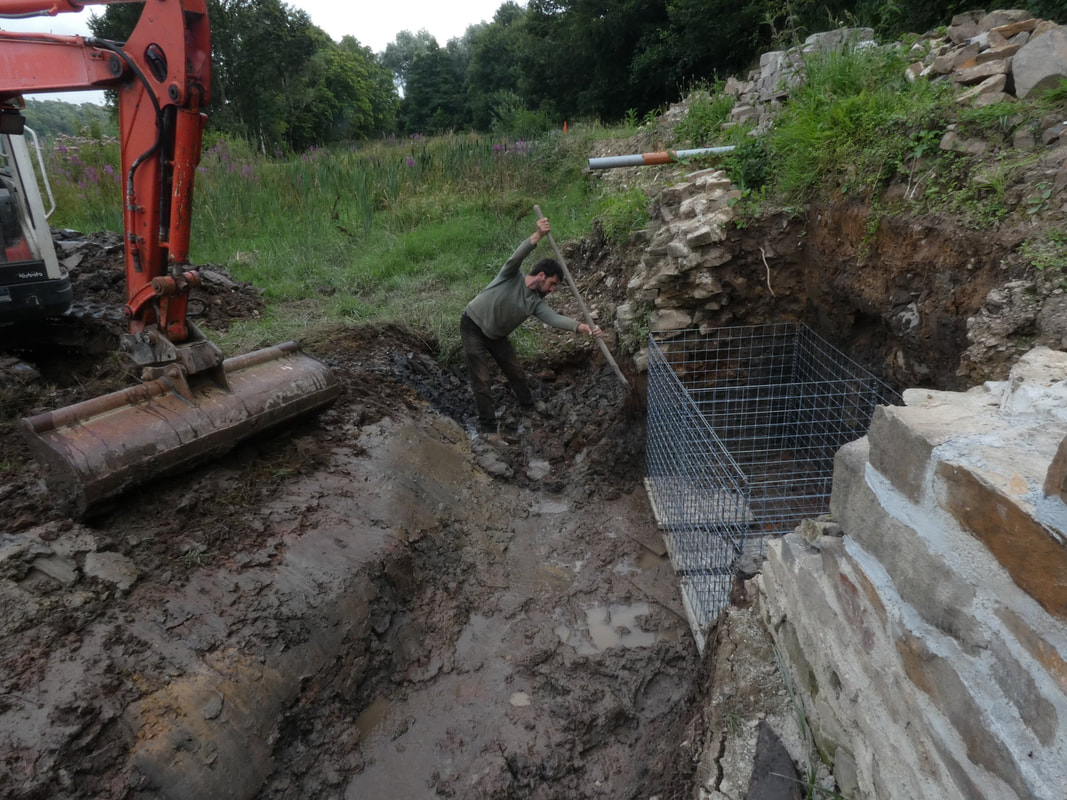 At least this provided a firm foundation on which to place the first pair of gabions and after a little ‘tidying up’ of the excavation, they were duly lowered snugly in to place.

​Filling them should now be relatively quick and easy. One major problem solved! 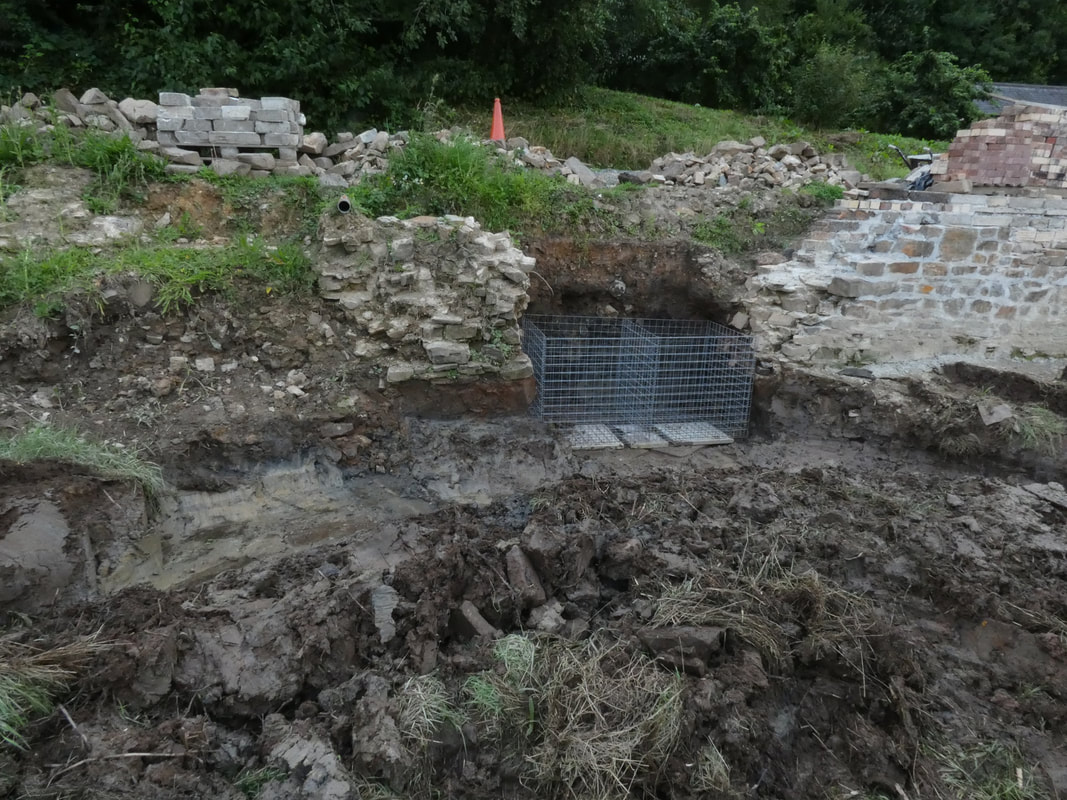 A reduced team got on with several tasks today. The photos show Clive discovering interesting old bones in a space in the mill (an old volunteer perhaps?) and Ade with yet another piece of rusty iron whilst preparing the mill wheel pit for reconstruction Good to see you back Ade!
​There is a picture of Colin and Brian building up the middle pound wall on the correct line after confirming the original route. Meanwhile Tony was restoring part of the bearing block of the wheel. Altogether a good days progress.
ROSEMOOR RESTORATION REPORT by Michael Elliott - 4th August 2021

A smaller than usual team still made excellent progress, exposing the double wall next to the wheel race of the tucking mill, and rebuilding the wharf wall on the off-side towards the bund carrying the track across the canal. This wall is now more or less at full height, and rebuilt up to the disrupted corner where the canal widens to the full width alongside the lime kilns. It is not clear what has happened on this corner, as the stones are not laid but rather throw back, perhaps around a long-gone telegraph or electricity pole that was driven through the wall at this point. 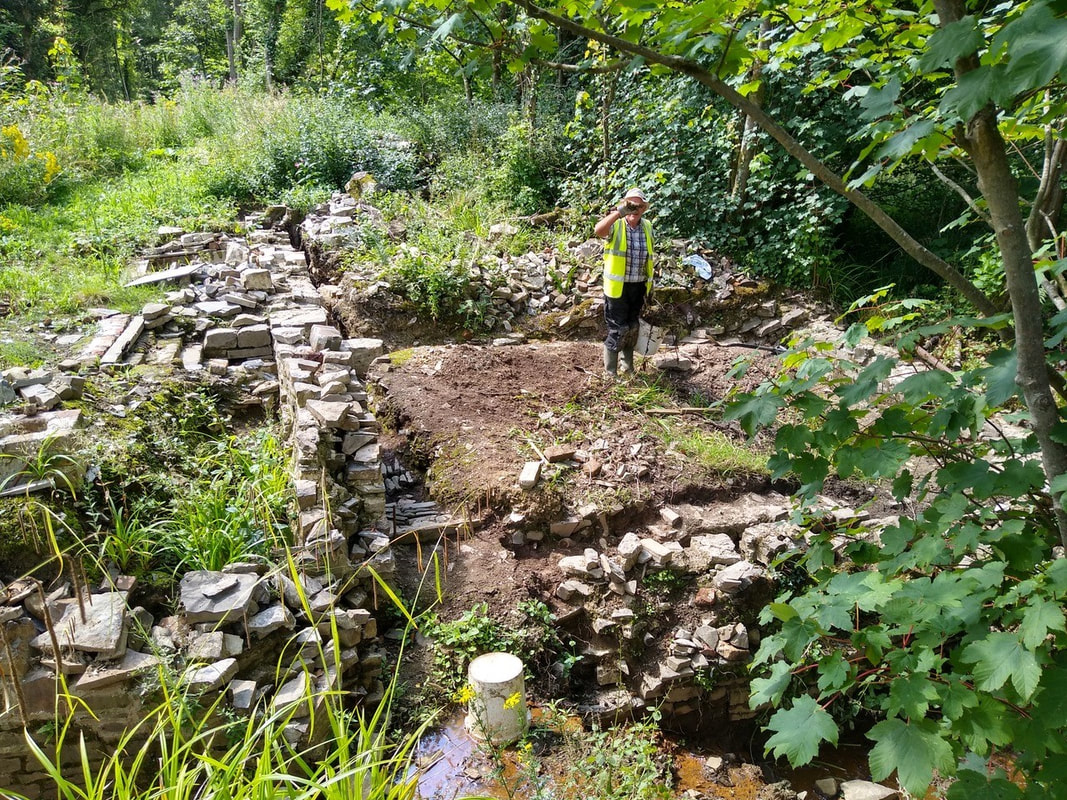 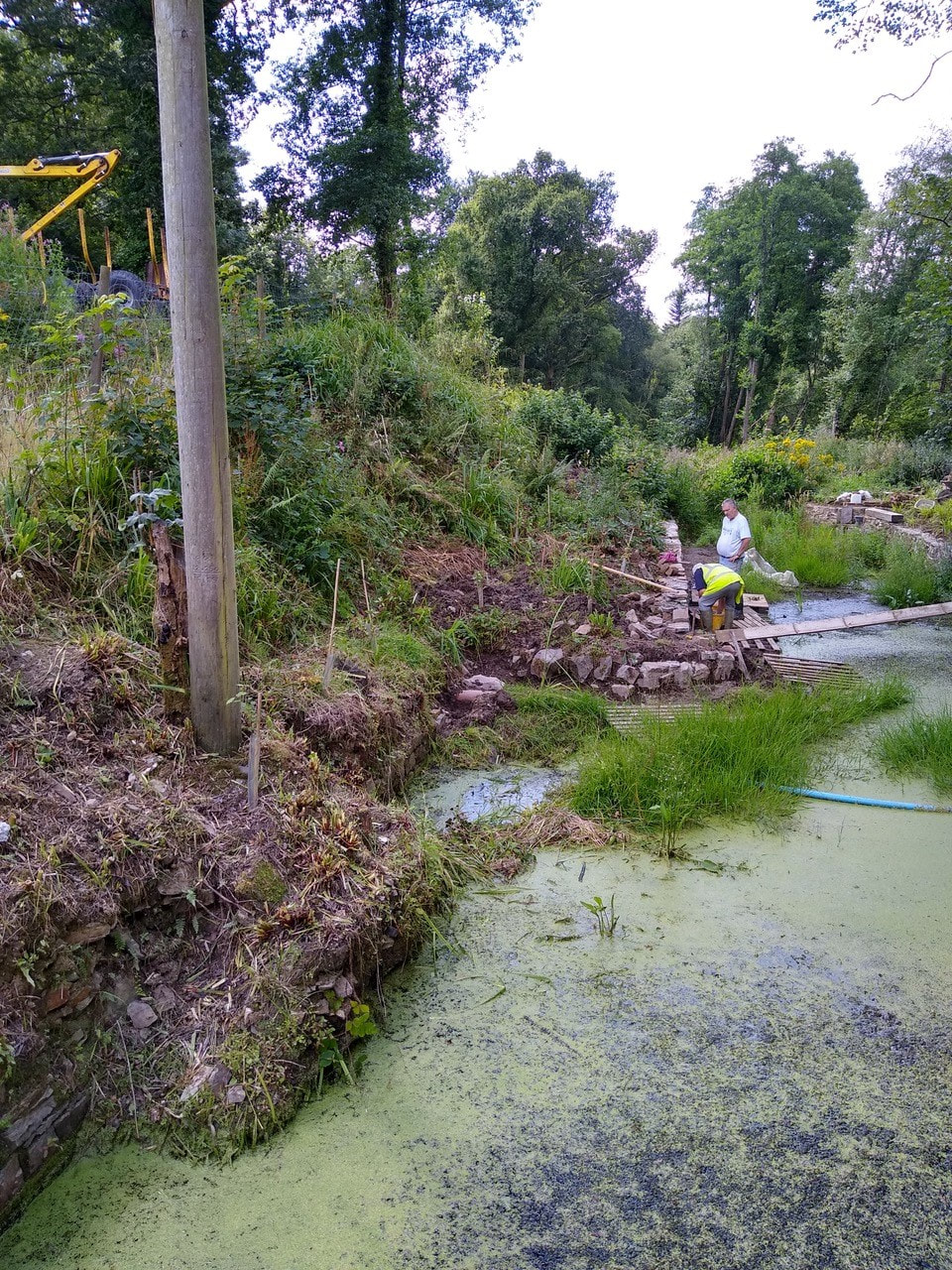 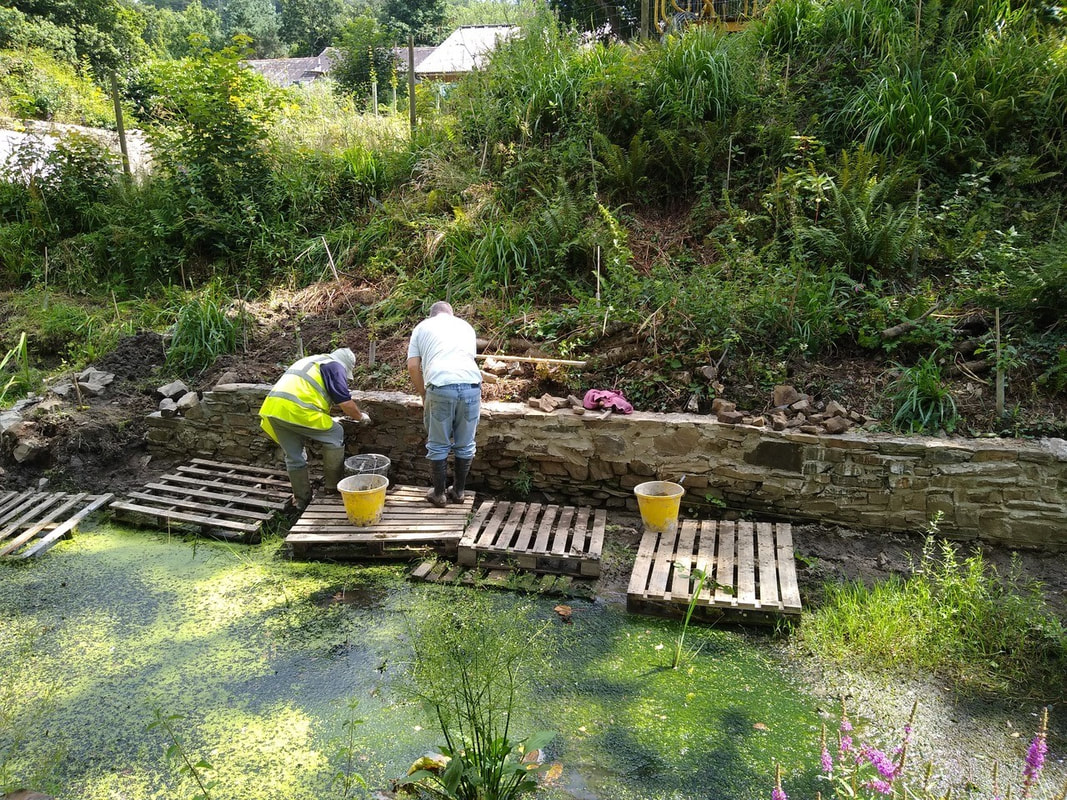 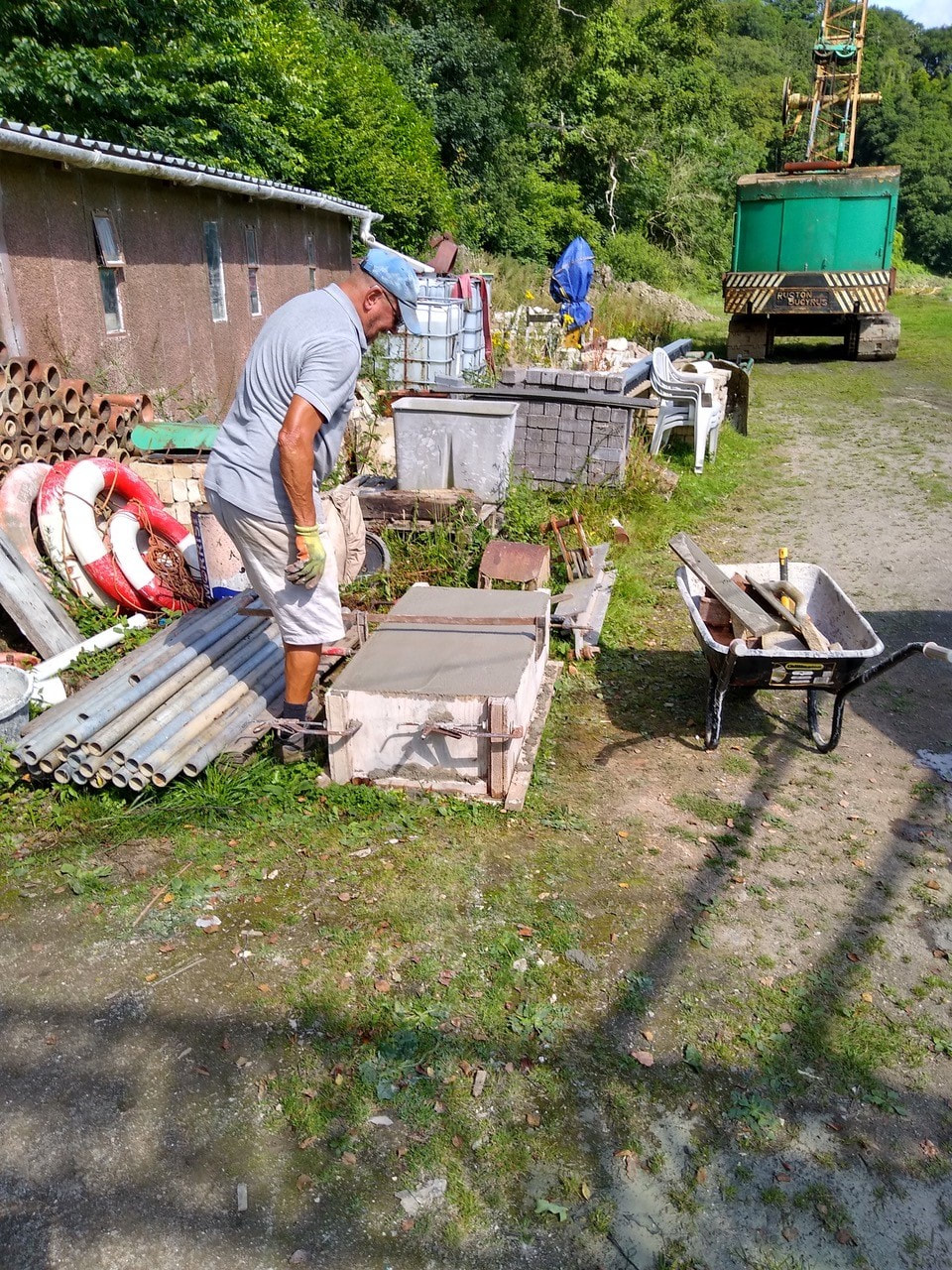 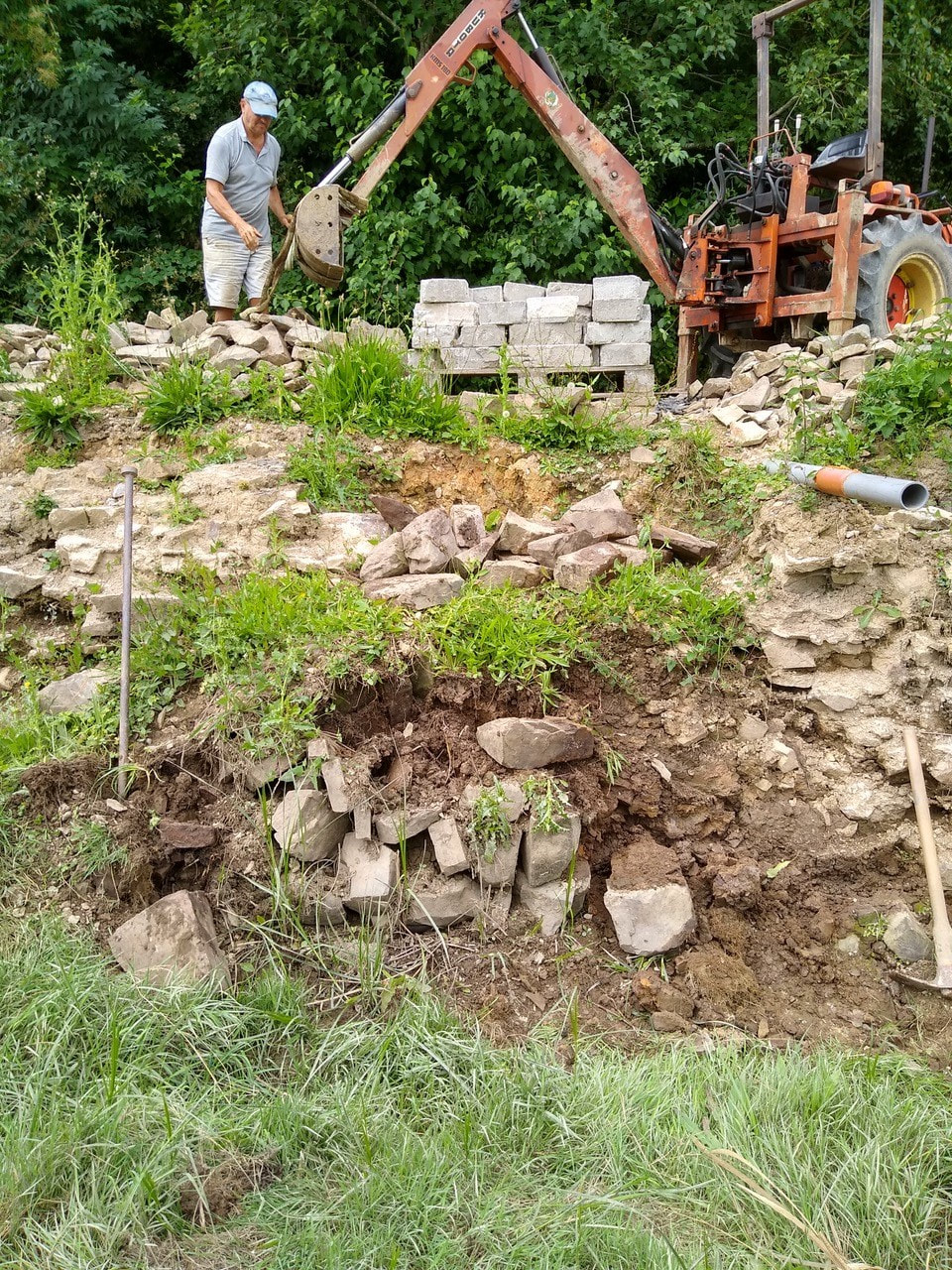 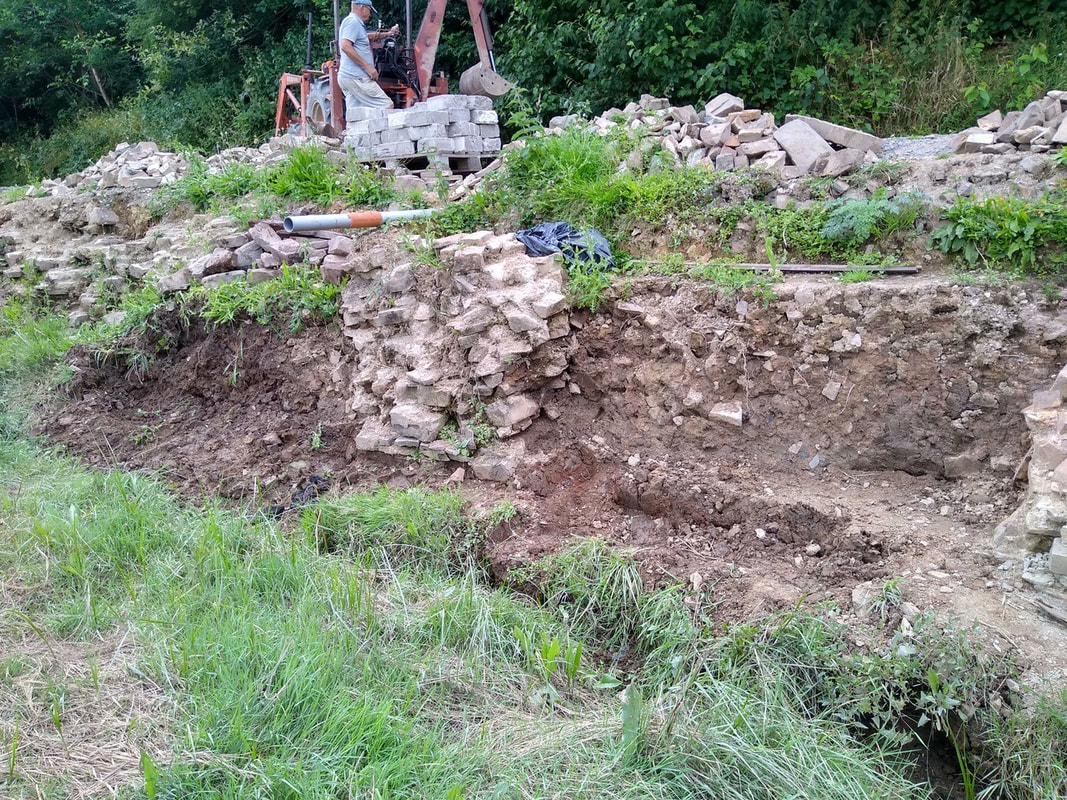 Start from the Puffing Billy (old Railway Station Inn) and follow the Tarka Trail (old railway line) to where the Rolle Canal skirts Furzebeam Hill. Here the towpath leads to the Roving Bridge behind Beam House and on to the Aqueduct over the River Torridge. The Tarka Trail then leads back via Beam Weir to the start point.

Length a little over 2 miles. Meet at 2:30pm at the Puffing Billy car park. Please car share if possible, as the car parks can get very busy on a Summer Sunday afternoon.