One of our volunteers has found an interesting piece showing a fulling hammer in action. It comes from Fred Dibnah's Mills and Factories.
ROSEMOOR RESTORATION REPORT by Tony Nicholls - 14th December 2022

A hardy bunch of navvies arrived at Rosemoor yesterday in temperatures of -4ºC. It was bracing to say the least! The canal and much of the surrounding ground was completely frozen so there was very little we could do in practical terms. In the end we contented ourselves with removing a lot of the surplus stone lying around in front of the lime kiln and giving the area a general tidy up. The smaller stone we used to infill some gaps behind the western wall of the upper basin. One brave member of the team managed, after a considerable struggle, to get the strimmer started and set about strimming the frosty grass in front of the lime kiln. This area has been neglected over recent months and will need some TLC in the Spring to bring it back into good condition. 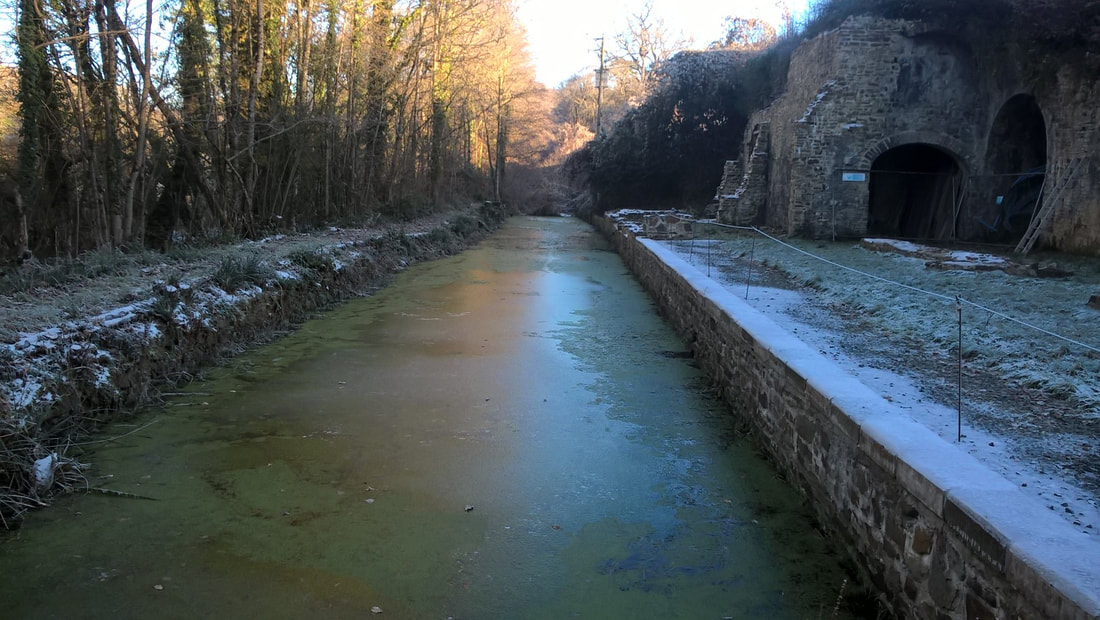 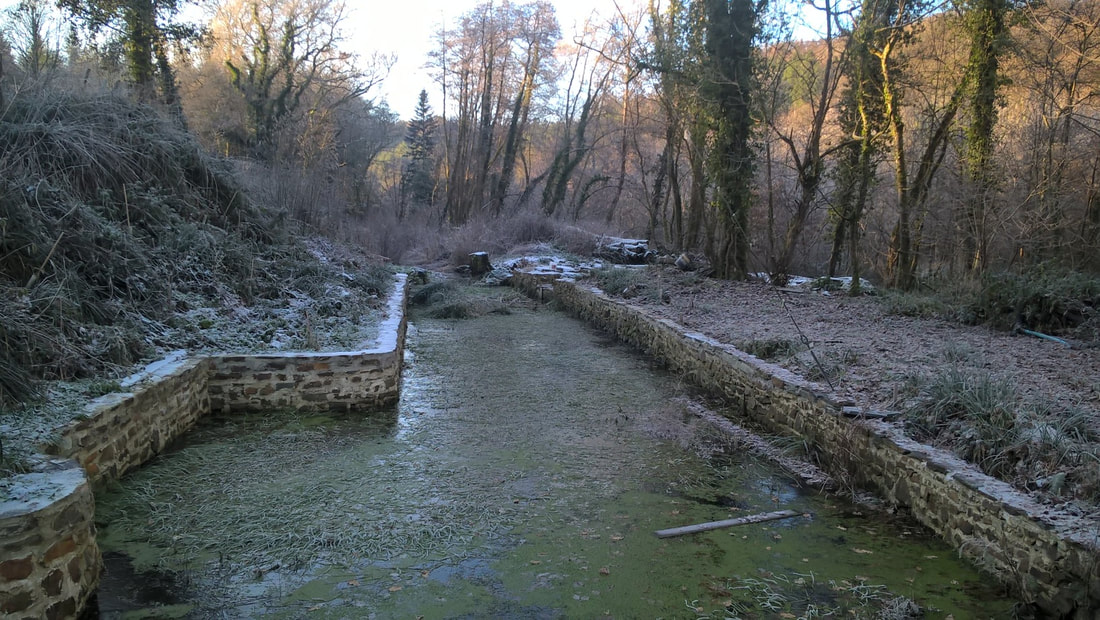 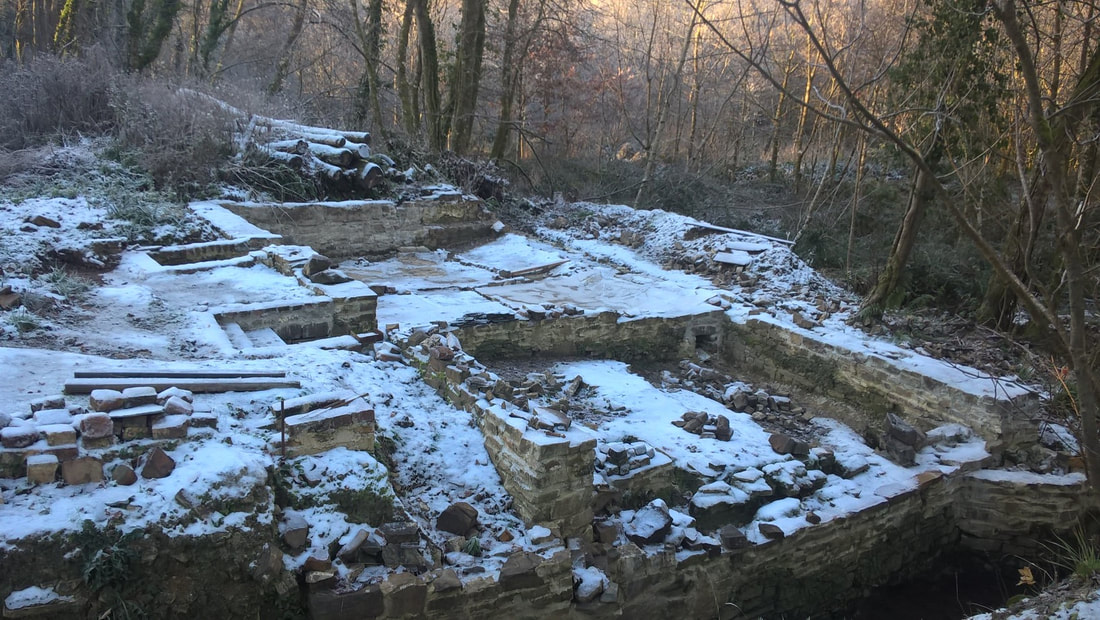 Frozen tucking mill
It was good to see our Rolle Robin arrive soon after we started work. Finding a source of food in these icy conditions is not easy so he immediately set about foraging in the softer earth where we had removed stones and seemed to enjoy a welcome breakfast!
Rolle Robin
​We finished work slightly earlier than usual and enjoyed a coffee in the pale winter sunshine before repairing to The Cavalier Inn for a well-earned Christmas lunch. 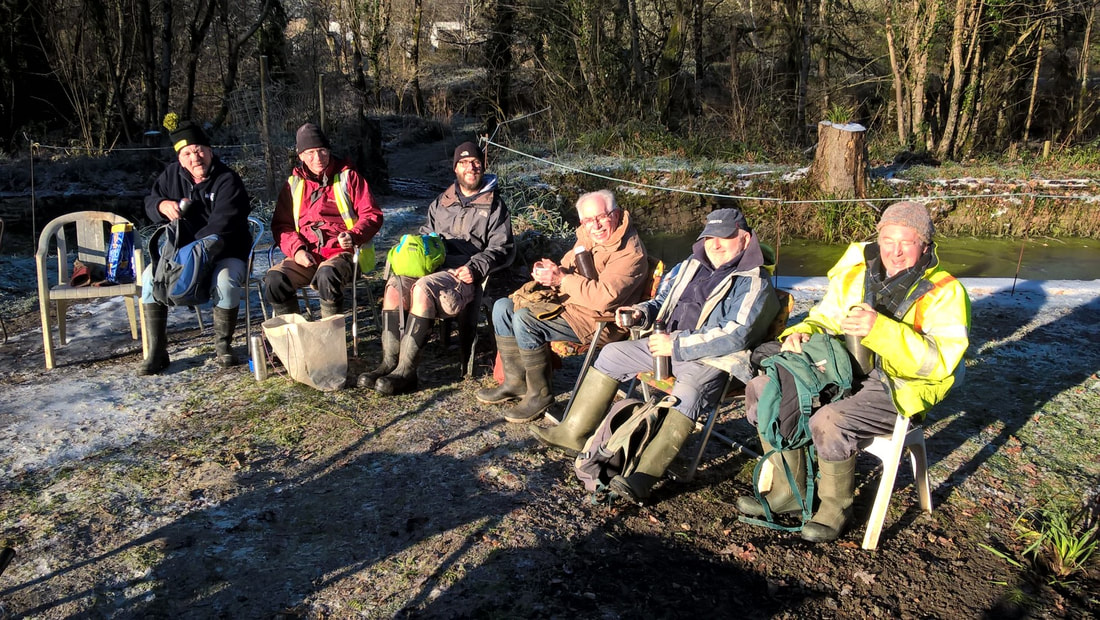 Maybe it's just the wellies, but this one is giving me a 'Last of the Summer Wine' vibe - Mike, website editor
Working parties are held every Wednesday morning, meeting in the main car park at RHS Rosemoor, Torrington at 9.30am. Please contact Project Manager, Ian Harrison (tel.01237- 475707) for more information. ​
ONE LAST BLOCK ON THE WALL (Nearly Pink Floyd)

In preparation for the anticipated arrival at Sea Lock of Steve and Nick on Tuesday 6th December 2022, on the previous Saturday, (3rd December) I craned and dry-laid 2 coping blocks which I had cast quite some time ago when widening the causeway across the canal, onto the end of the middle wharf wall.  This gave me the size of the block I needed to cast in order to bridge the gap over the land-drain crossing the wall.  The following day I put together the required shuttering and duly filled it with concrete (and a few bottles) and left it to harden.

On Tuesday Steve and Nick arrived as planned and whilst they set about surrounding those blocks and the spaces beneath with slivers of stone and mortar I gingerly picked up the last cast coping ‘stone’ and craned it over to the wall, where the gap between the other copers looked a little bit like a missing tooth, and carefully lowered it into place.​ 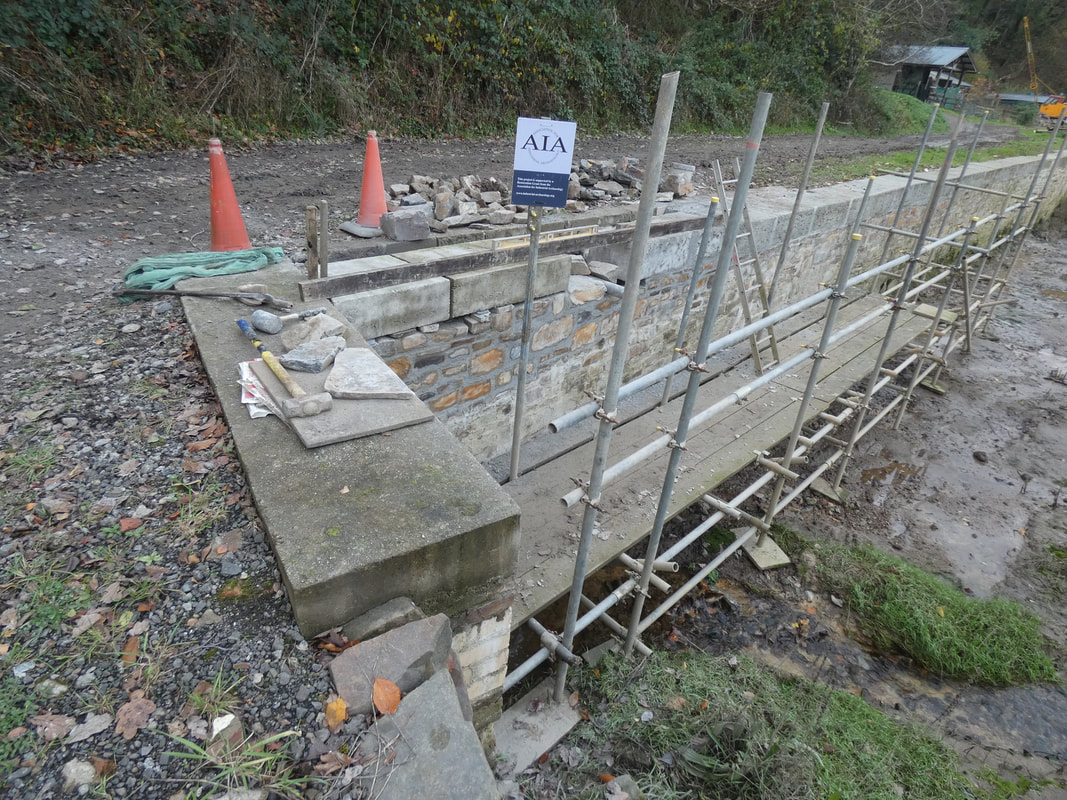 ​Steve stood on the scaffold platform keeping well clear of my performance above with the crane whilst the block hung in the air. In the meantime, Nick took on the role (Rolle?) of David Bailey and digitally recorded the final moment whilst Steve posed for the camera.

I was a little concerned about lifting and moving this block since it was only a day and a half old, so the concrete was still ‘green’ and soft.  With it eventually laid on the wall without mishap Steve and Nick wasted no time bedding it down. 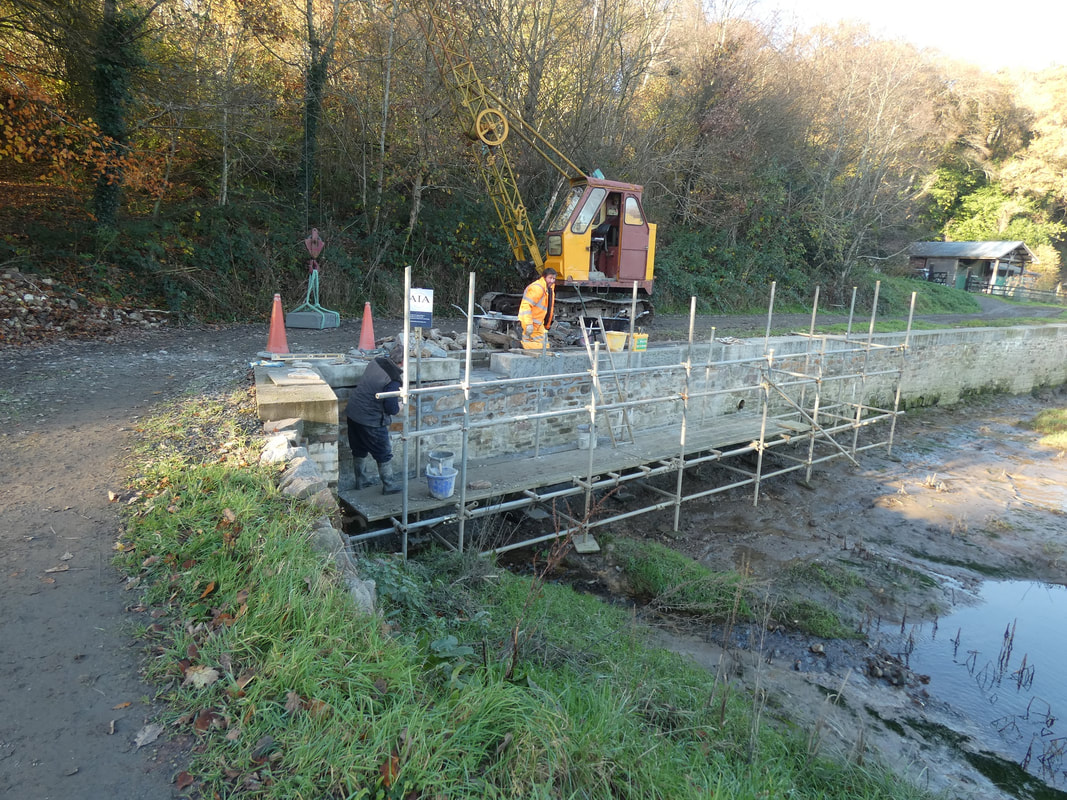 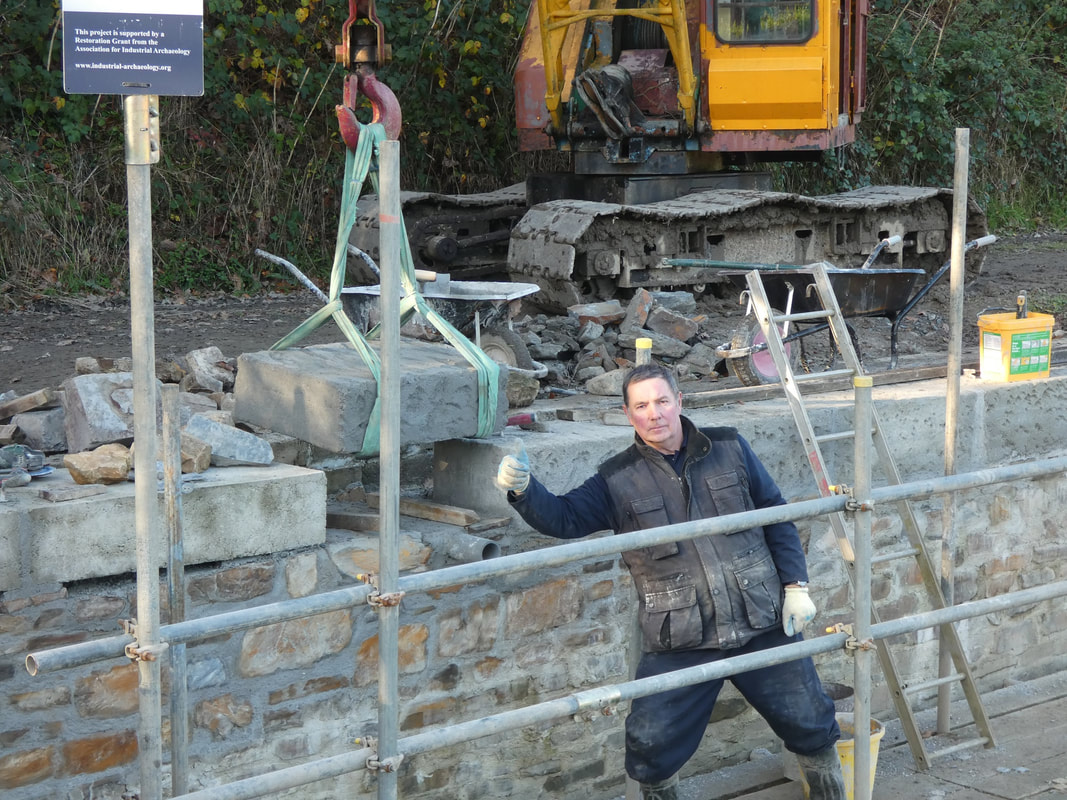 Having returned the crane to its usual parking place I then spent time cutting and splitting stone for Steve and Nick to lay and then began to dismantle some scaffolding from the end of the platform where it was no longer required. 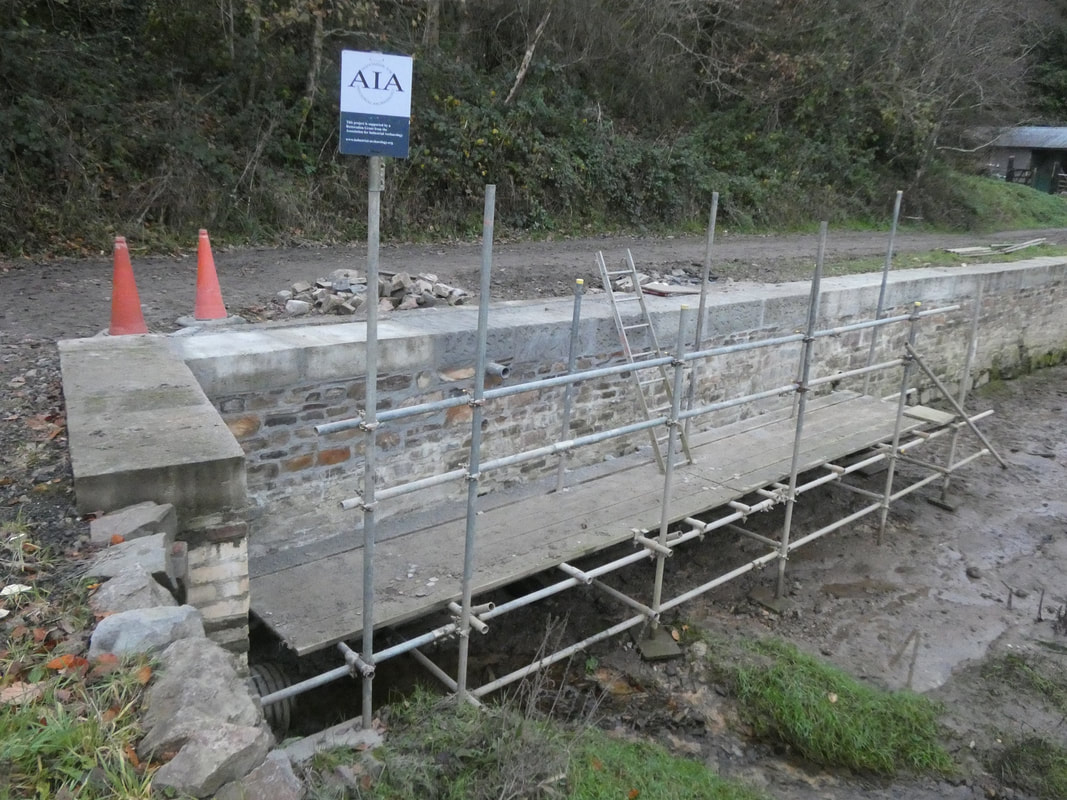 ​It had been a bright, sunny and dry day although the wind had a real bite to it.  After lunch the temperature was beginning to fall quite considerably.  Nick had mixed 2 more batches of mortar which proved to be exactly the required quantity to complete that section of wall and Steve finally signed it for posterity. (Don’t think he can spell his surname though!).  Now we all have our names set in ‘stone’ hidden somewhere along the wall.

And all this in time for Christmas! 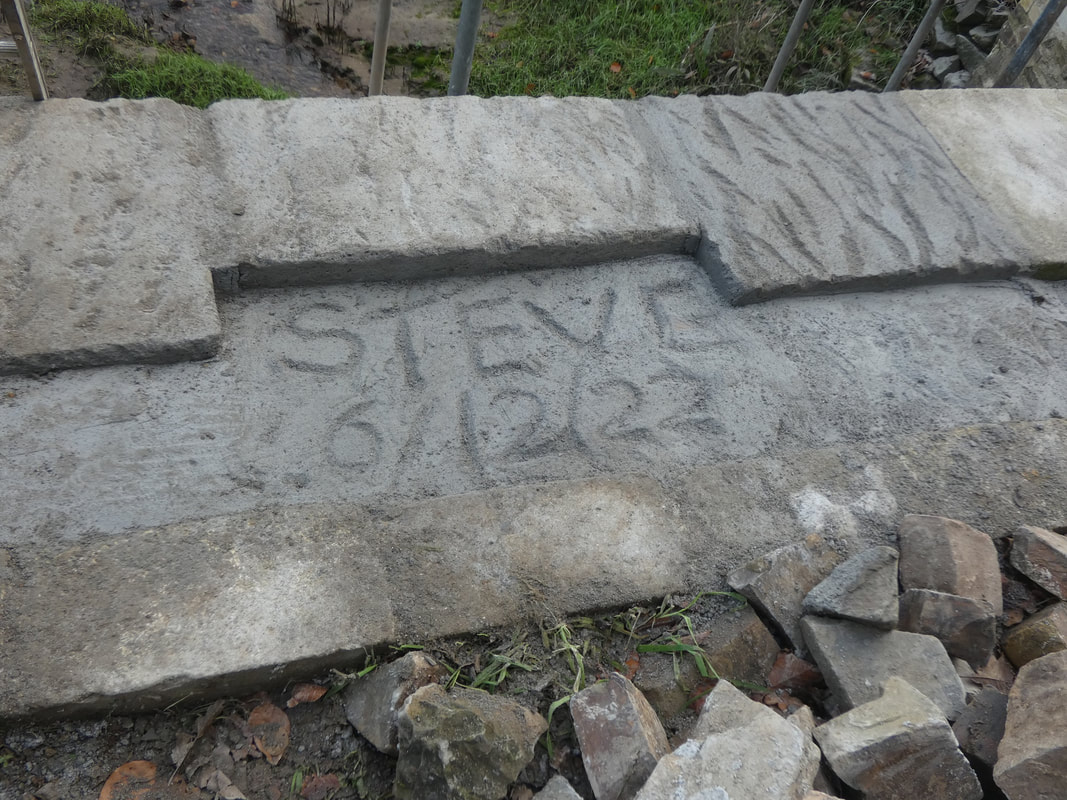 All that is required now to totally finish this project is to dismantle the remaining scaffolding, repoint a few gaps between stones along the bottom of the wall, finish dredging some of the remaining silt in the basin and then laying some crushed stone along the top of the tow path where we have been working.

After this, what next?  Probably scrub-bashing along the wall of the upper wharf.  But that’s for another year!