ROLLE CANAL GUIDED WALKS ARE BACK!

We're delighted to announce that our popular walks will be taking place again this summer.

In the aftermath of the recent rain and gales, we were alerted to the fact that a large tree had been uprooted close to the roving bridge at Beam. Fortunately, the tree was not causing an obstruction but it had pulled away a lot of earth from the embankment and weakened the towpath which is now in a precarious condition. Given the substantial damage and the risk to the public, we felt that it was essential to carry out emergency repairs – even if only on a temporary basis.

With this in mind, a small team assembled at Beam to make a site inspection. We were dismayed to see the extent of the damage – the root ball of the tree is huge and, in falling, it has dislodged much of the stone in the embankment which lies scattered on the slope beneath. The edge of the towpath has started to crack and there is also the possibility that the bed of the canal itself could be compromised if no action is taken.​ 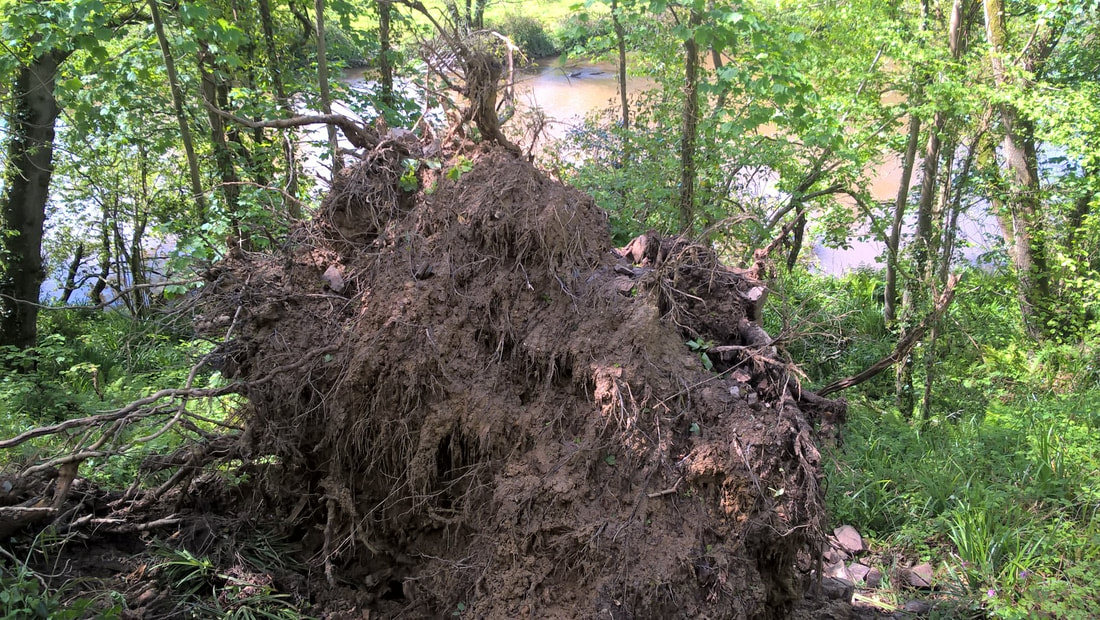 The root ball of the fallen tree 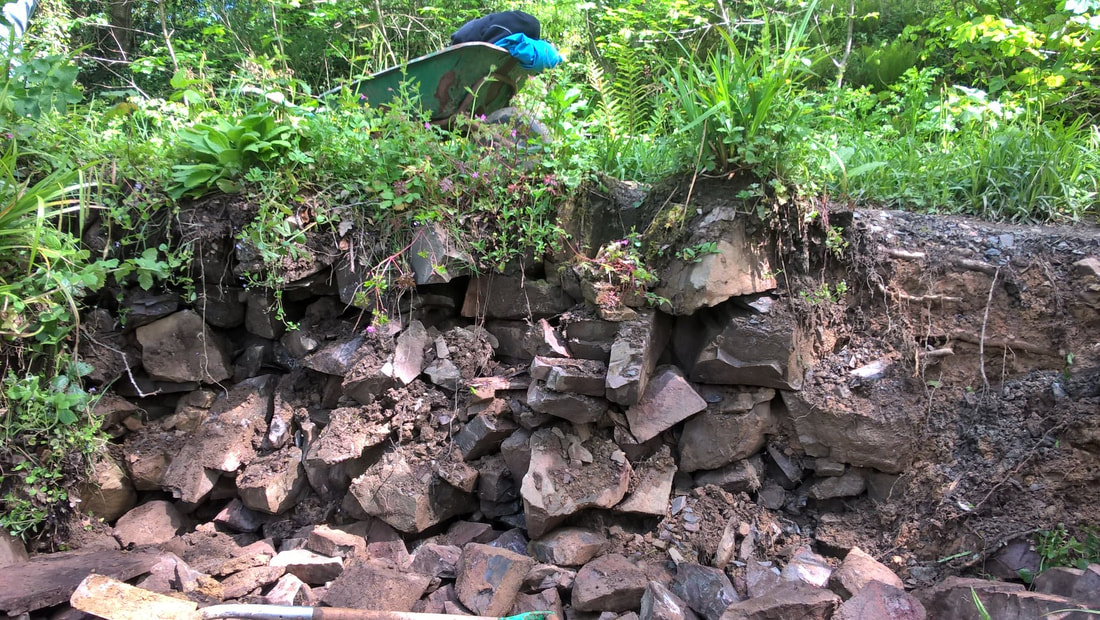 Damaged section of towpath
Access to the breach was difficult and our working area was very restricted. However, we made a start by laying some of the largest stones at the base of the breach to form a solid foundation. We then had the challenging task of retrieving stones from further down the slope and hauling them by rope up to the working area. Some of these stones are extremely heavy so the work was tiring but we successfully managed to re-build a good section of the wall during the morning. The earth from the root ball which had a heavy clay-like consistency was used to provide a rather gooey mortar.
A further working party will be required to complete the re-build but, for now, we have managed to stabilise the damaged area. Warning notices have been displayed at either end of this section of the path alerting the public to the risk of using the path. 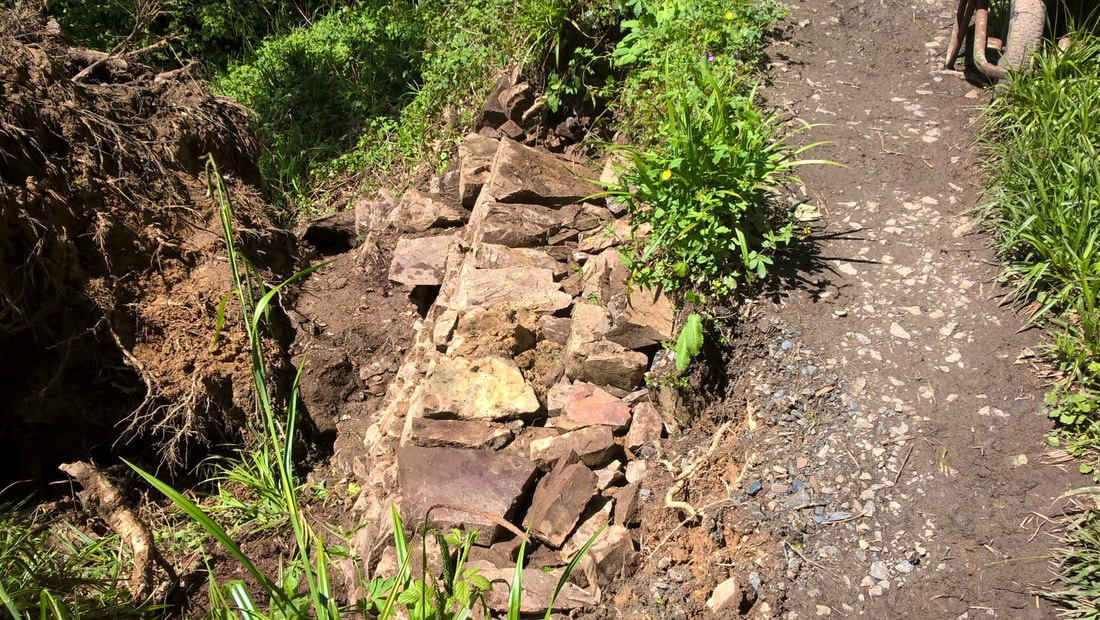 View of towpath and partially repaired embankment
Here is the the first picture of our new master Waller. You may recognise him as Tony Nicholls who, with a little help from his friends, produced over 30 sq ft of heavy stone walling on a good day at the office. Well done Tony, Colin and Brian!       Tony Barnes 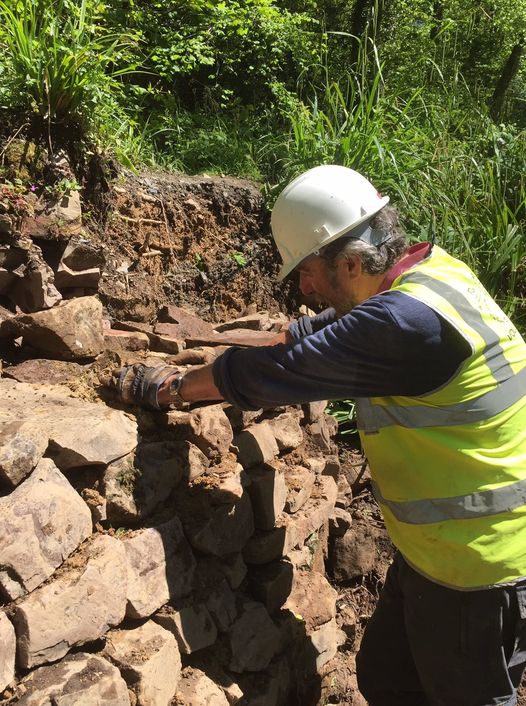 NB. THE TOWPATH IS STILL EXTREMELY DANGEROUS AND THE PUBLIC ARE ADVISED NOT TO USE THIS SECTION OF THE CANAL WALK UNTIL REPAIRS HAVE BEEN COMPLETED!
SEA LOCK WORKING PARTY - Report by Tony Nicholls - 25th May 2021

The work of rebuilding the wall of the middle wharf at Sea Lock continued this week, albeit with a slightly smaller workforce.
The first task was to break up a load of recently deposited builder's rubble. This entailed about an hour's work with bar and sledgehammer which certainly got the blood circulating nicely! This material was then used to provide backfill against the rear of the wharf wall. With this task completed, a mix of mortar was rapidly prepared and work laying more stones in the wall was resumed. We also continued to dig out the section of badly damaged wall further up the wharf, removing a lot of loose stone which enables us to get down to a solid foundation. The amount of dressed stone required to repair just a short section of wall is phenomenal and will be a major challenge going forward. However, the photos in the latest newsletter show the excellent progress which has been made during the last year.

Our workforce was very depleted this week as a number of volunteers were away either on holiday or with other commitments. To add to our difficulties, our generator proved to be rather temperamental and a lot of time was spent getting this to fire up so progress on site was limited.

We continued with the re-build of the arch in the lime kiln. The big problem which is hampering progress at the moment is the lack of good dressed stone for the corner of the wall so we are doing some exploratory digging around the old bridge to see if we can locate another source. Initial results seem promising. 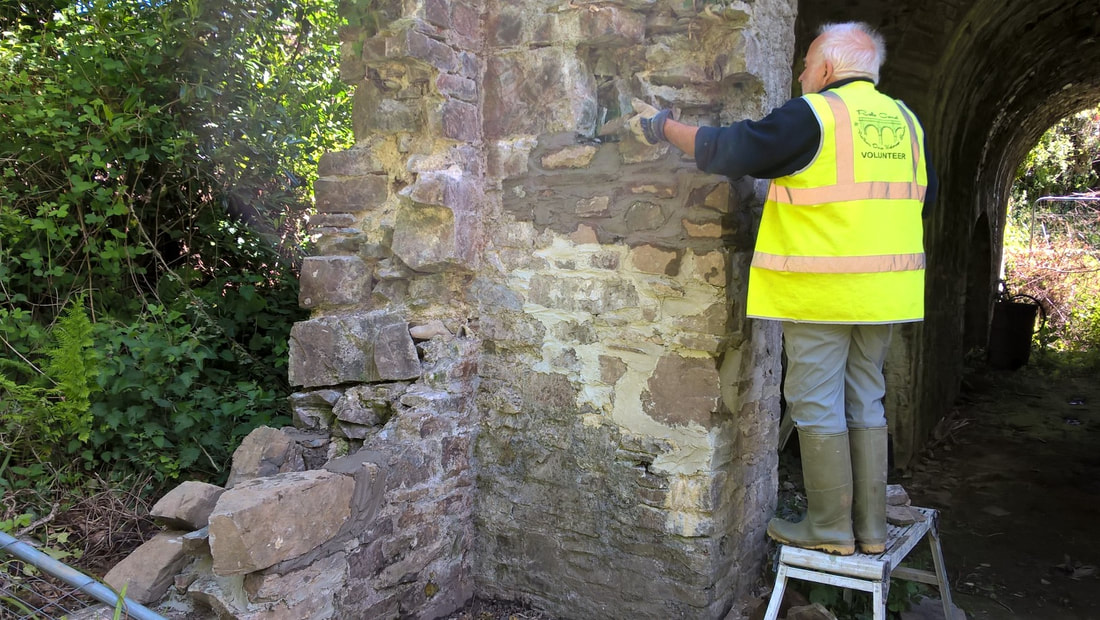 ​A few more stones were laid on the upper basin wall and further excavations made in the tucking mill where the wall of the third chamber is now well revealed. ​A huge stone was unearthed here which was very quickly claimed by our masons for repairs to the lime kiln. 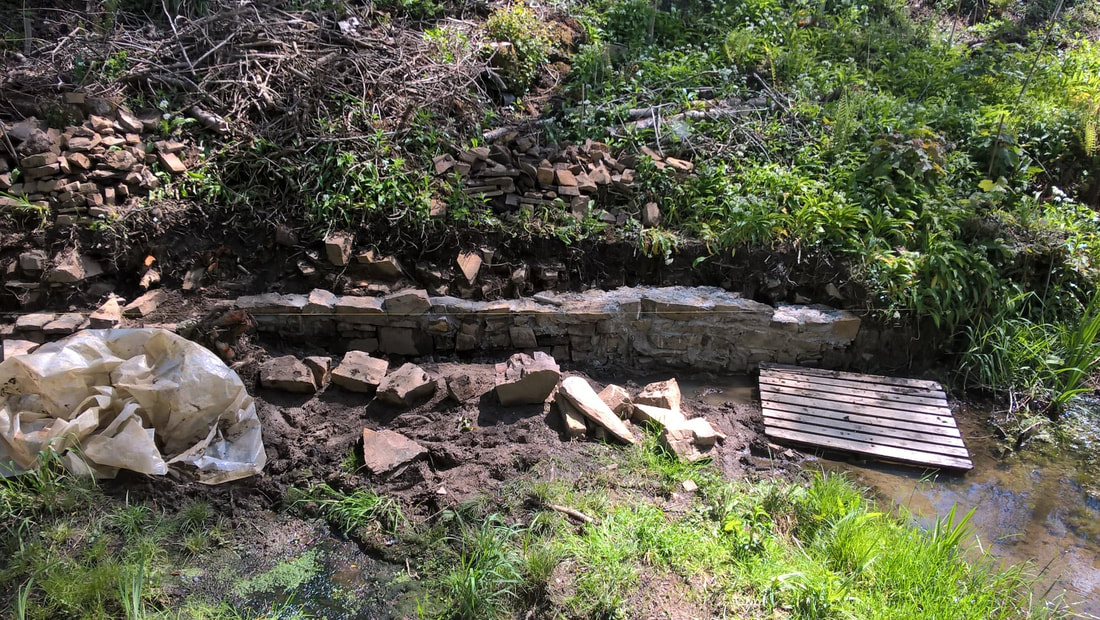 Work today at Rosemoor concentrated on the tucking mill area. The mill continues to surprise us. The first chamber has a cobbled stone floor.  Removing the tree roots from the bottom of the steps at the second chamber revealed more of its brick floor. And excavating the base of the adjacent wall has exposed a new section with a concrete floor. The side of the wall here shows the remains of plaster, so perhaps a wet process was carried out in this third area. ​ 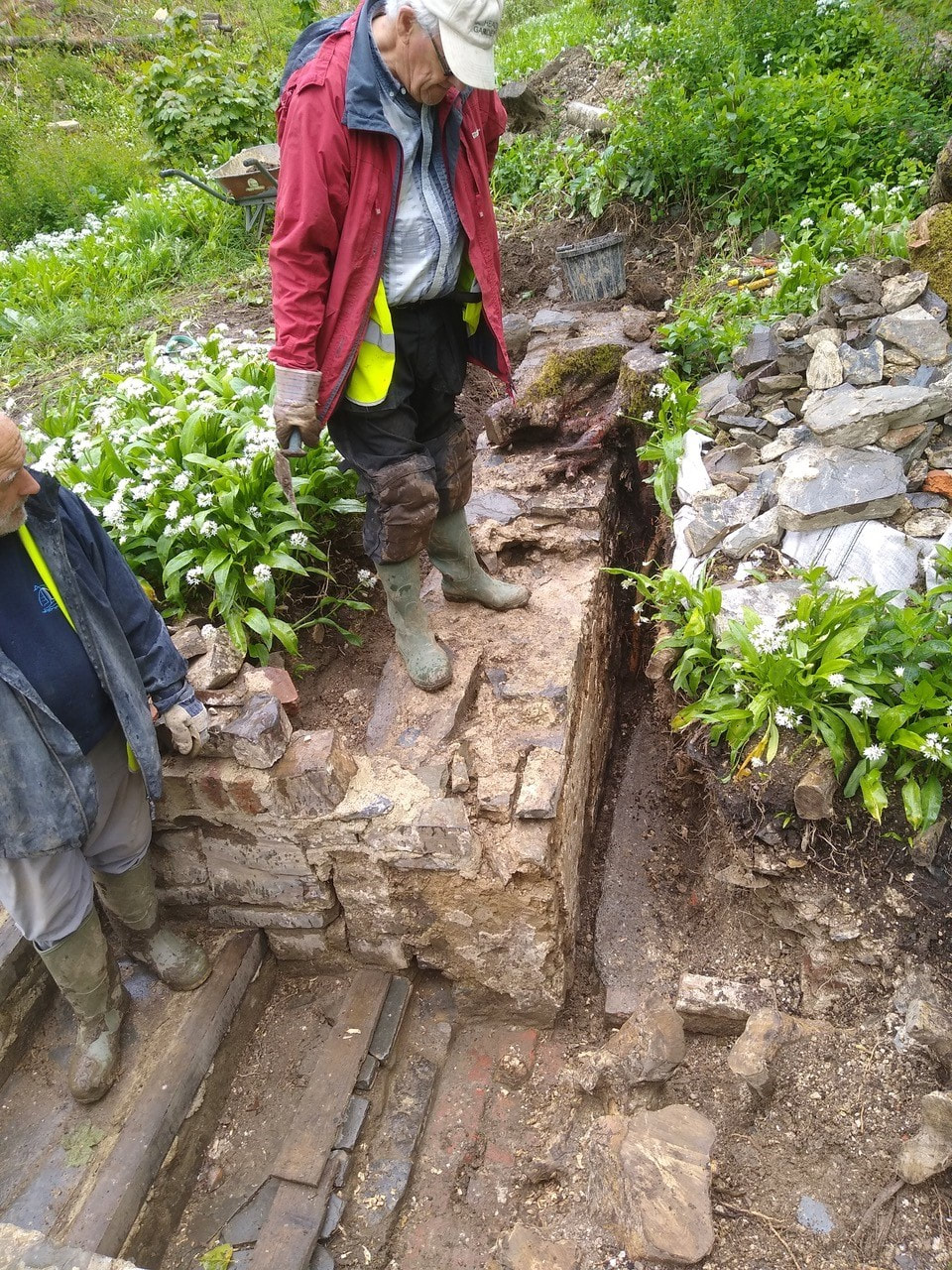 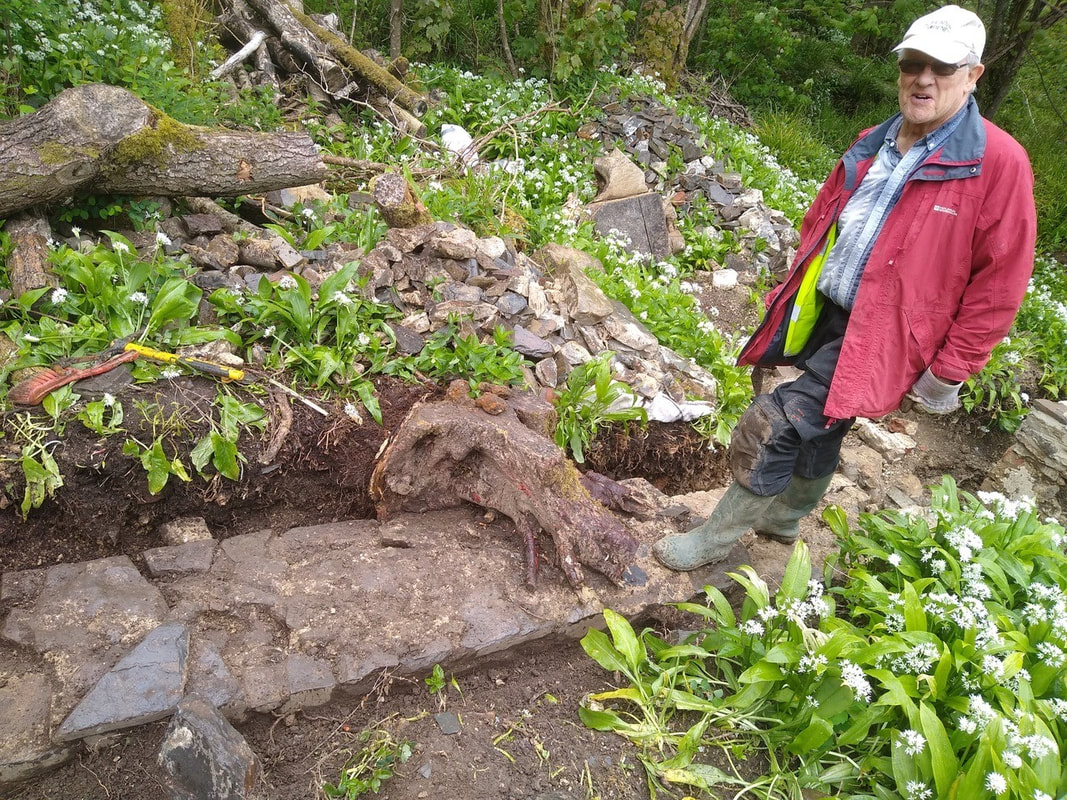 ​Meanwhile, the canal-side wall opposite was dismantled further, ready for rebuilding. ​ 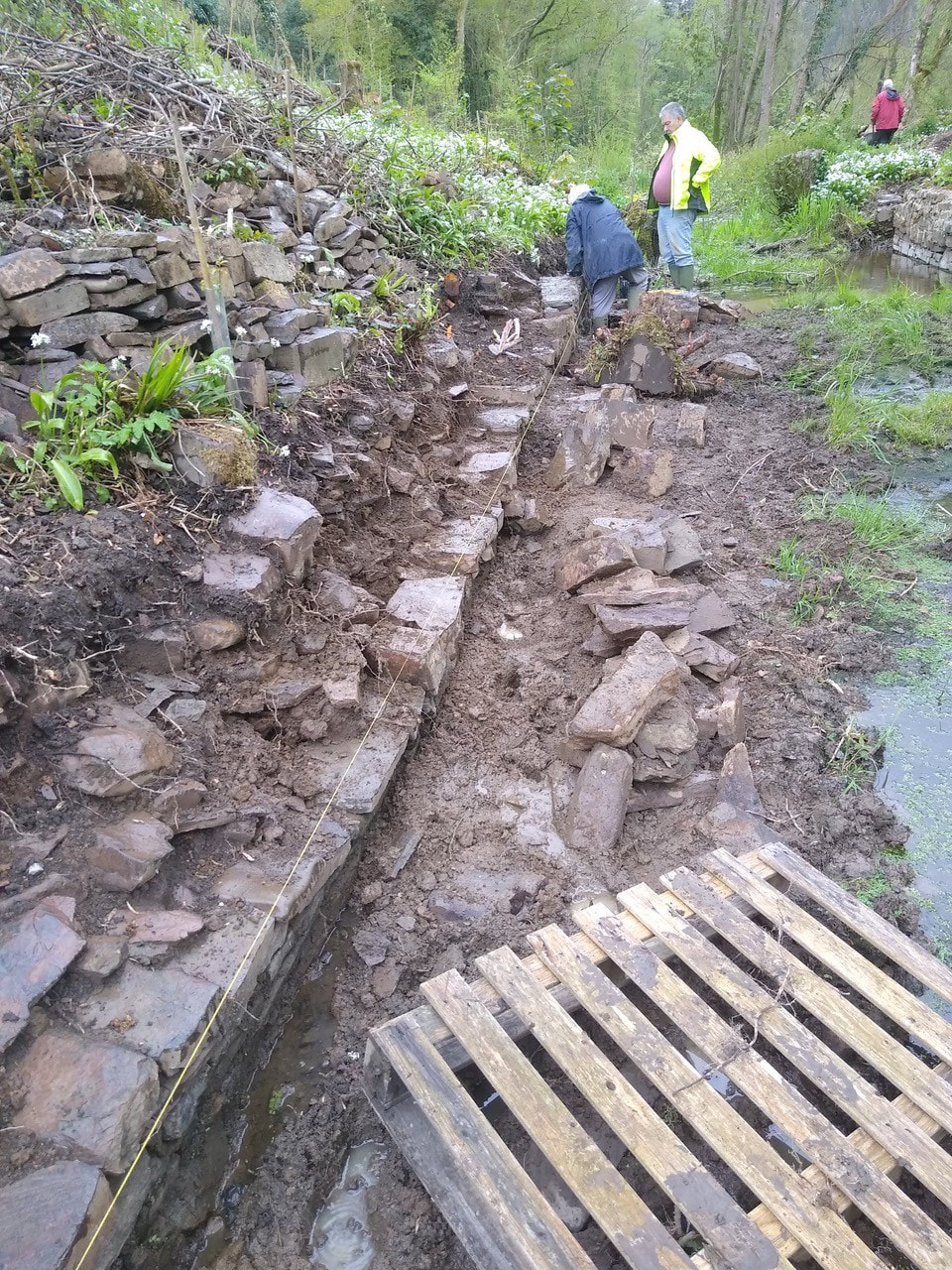 The pause in demand for mortar allowed a little work on the lime kiln near the bat sanctuary and elsewhere. The cement mixer was then in constant use, as a start was made rebuilding the canal-side wall. 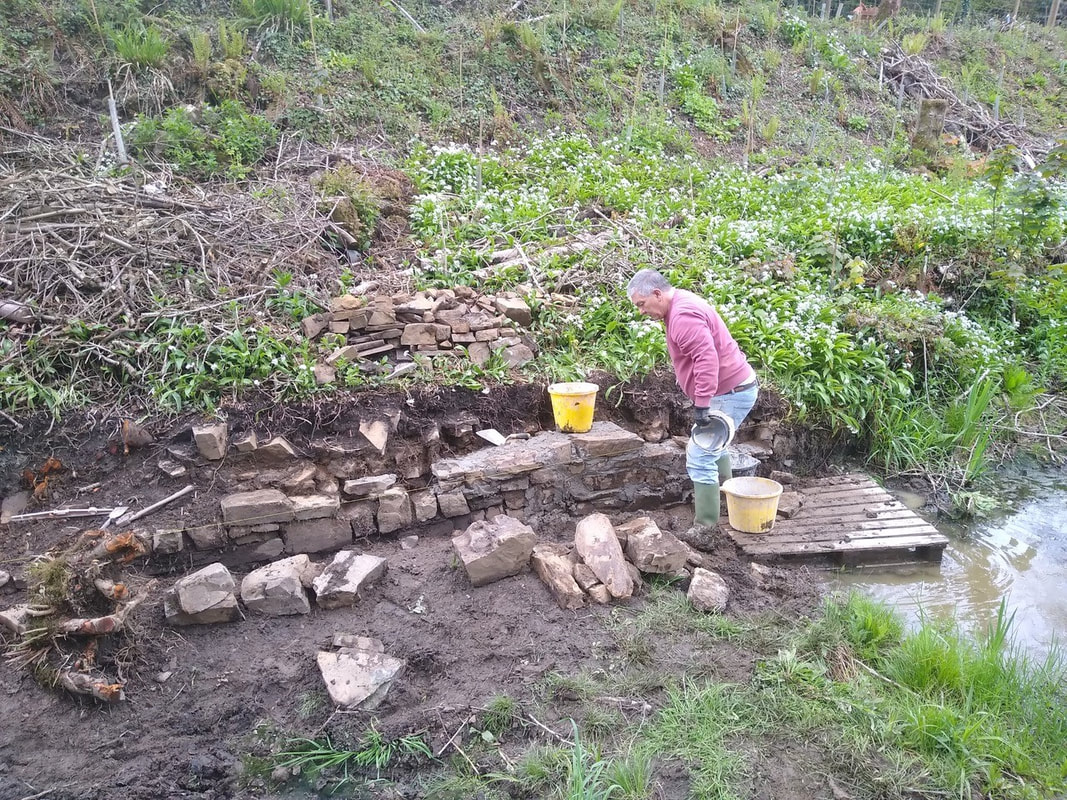 ​Showers threatened the small Sea Lock working party but never materialised. The warmth came and went as hydraulic lime was fetched from the car, mortar was mixed and the wharf wall was slowly built up. Progress is slow because of the volume of material needed for even a small section of wall, and there is some way to go! I left at lunchtime, leaving a barrow load of mortar for the “bricky” (or should that be stoney?) to use up. 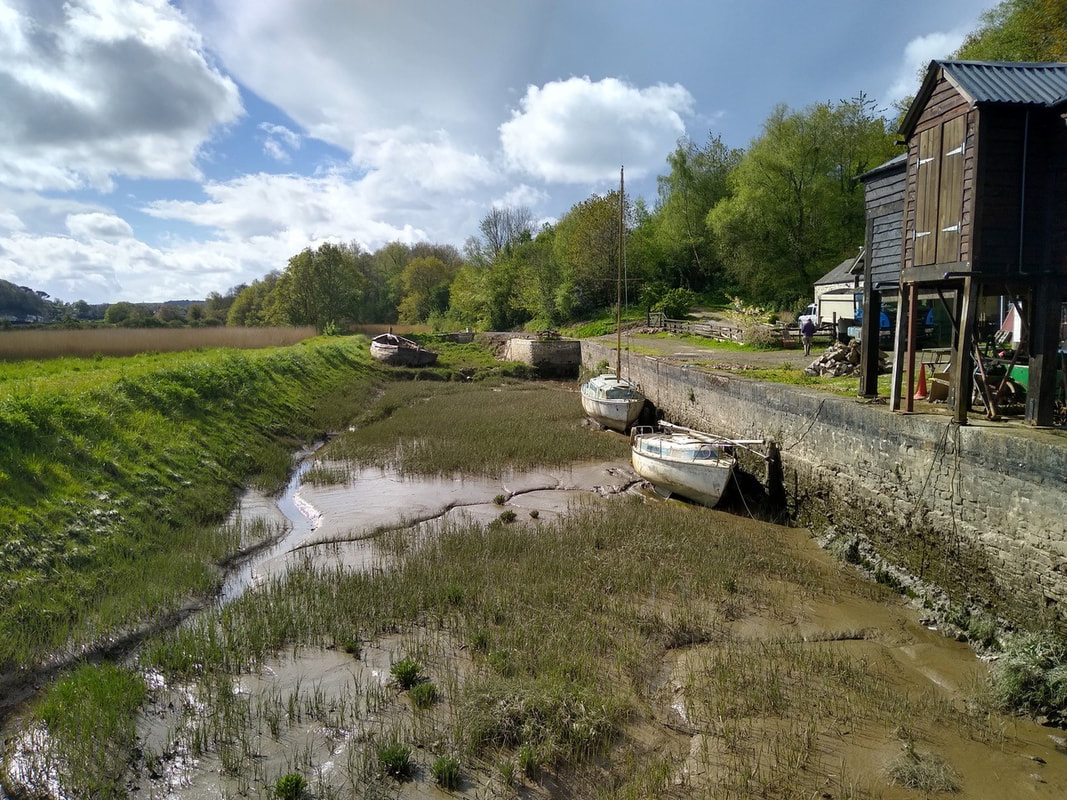 In the upper basin, there was great rejoicing as the troublesome tree stump finally yielded after three weeks of intensive effort and was successfully removed. We now have a clear stretch of wall to work on and we made a start by lifting out some of the displaced stones to enable us to get down to a solid foundation. Weather permitting, we hope to commence the re-build next week. 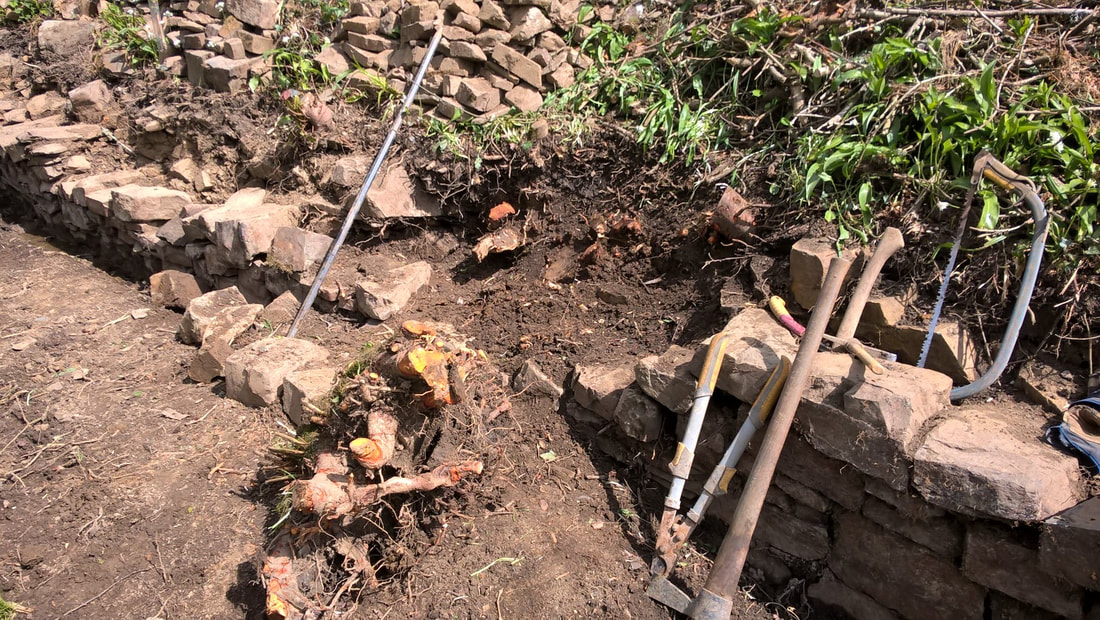 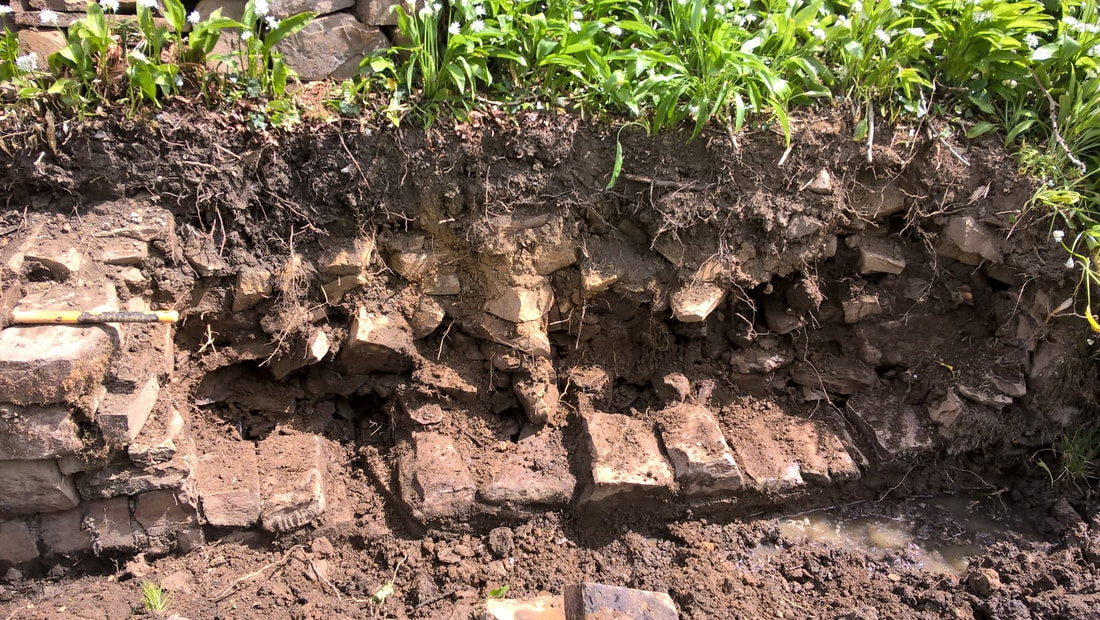 Basin wall ready for re-building
Further excavations continued in the tucking mill where the internal wall running due south from the second flight of steps is now clearly revealed. This extends for a further twelve feet or so before returning and seems to mark the edge of the third chamber. Unfortunately, this is the area where we dumped a lot of stone many months ago so it looks as if this may have to be moved again. Hindsight is a wonderful thing!
Generally, working parties are held every Wednesday morning, meeting in the main car park at RHS Rosemoor, Torrington at 9.30am. (NB. Arrangements may vary during Covid restrictions). Please contact Project Manager, Ian Harrison (tel.01237- 475707) for more information. ​
SEA LOCK REPORT by Michael Elliott - 27th April and 4th May 2021

Last week the team arrived to ground damp from a very high tide. These spring tides will reach to within a metre of the top of the wharf wall when it is finished. Further progress was made in exposing the top of the wall after a gap, up to the pipe, with no sign of the original. A good section of the back of the wall was rebuilt with cleaned up concrete blocks and brick. The work continued this week, cleaning blocks, clearing off mud with a powerful leaf blower, mixing mortar and rebuilding the wall up to the buttress. The museum building was looking much straighter, as it had been been jacked up three inches in the meantime by another group of volunteers. 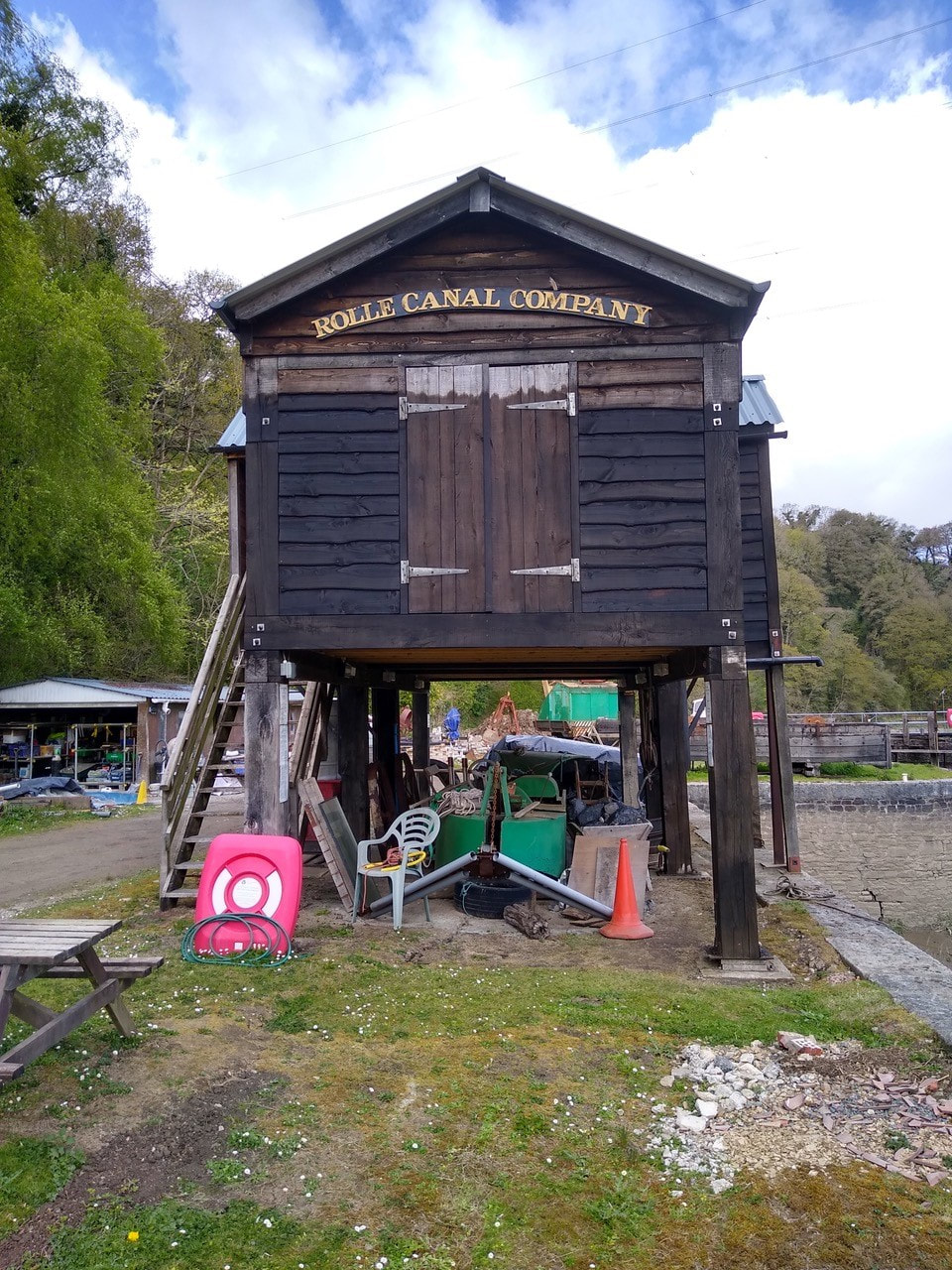 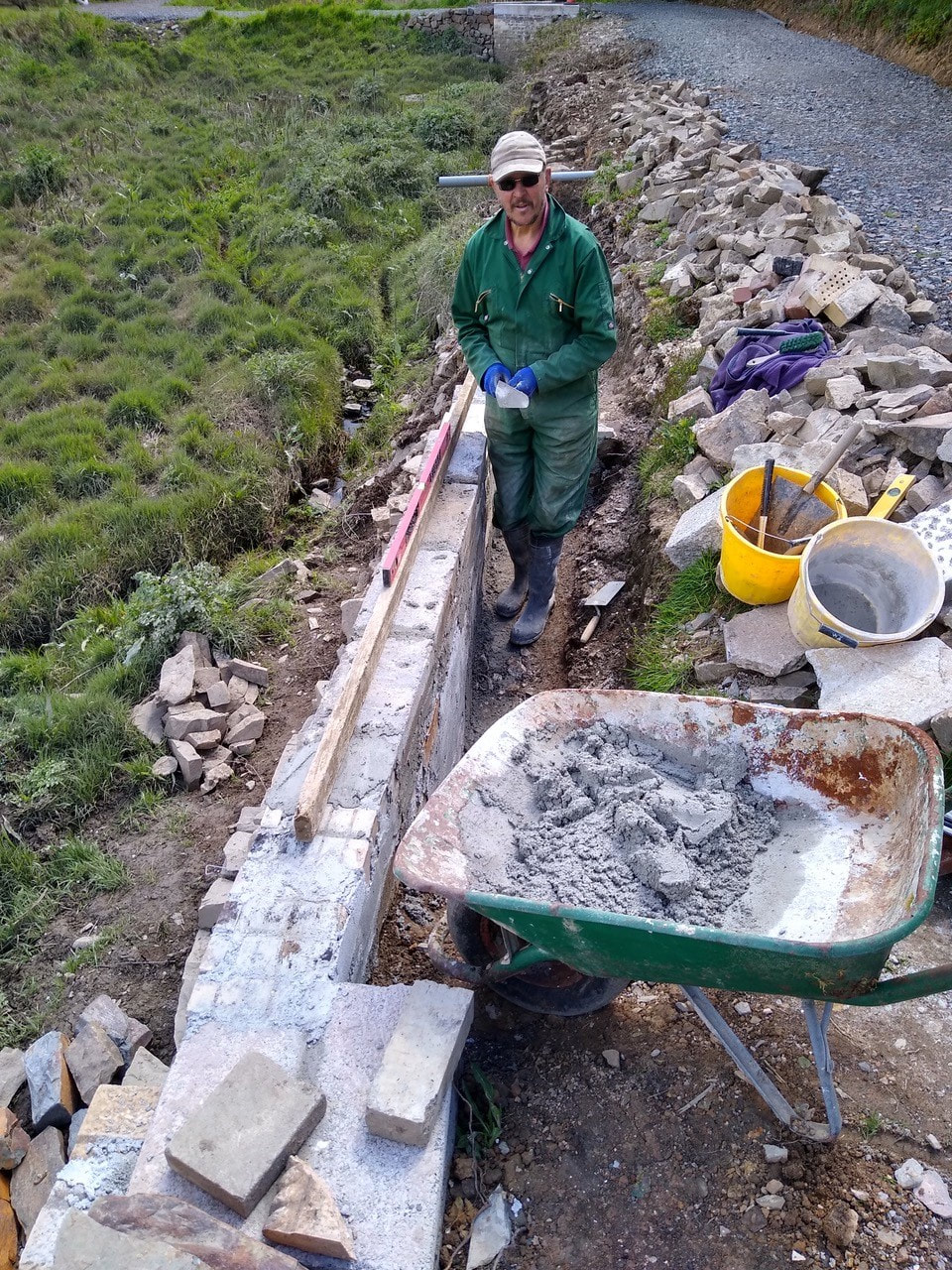