Despite being a bit low on numbers this week we made good progress on several fronts: 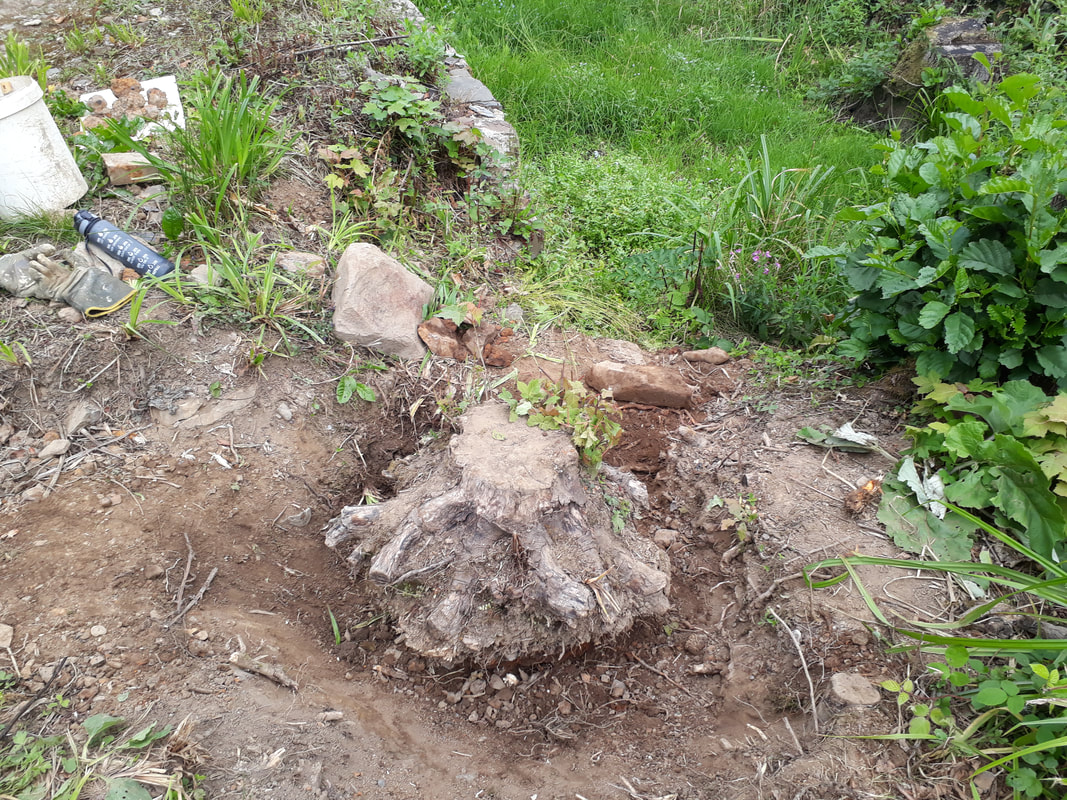 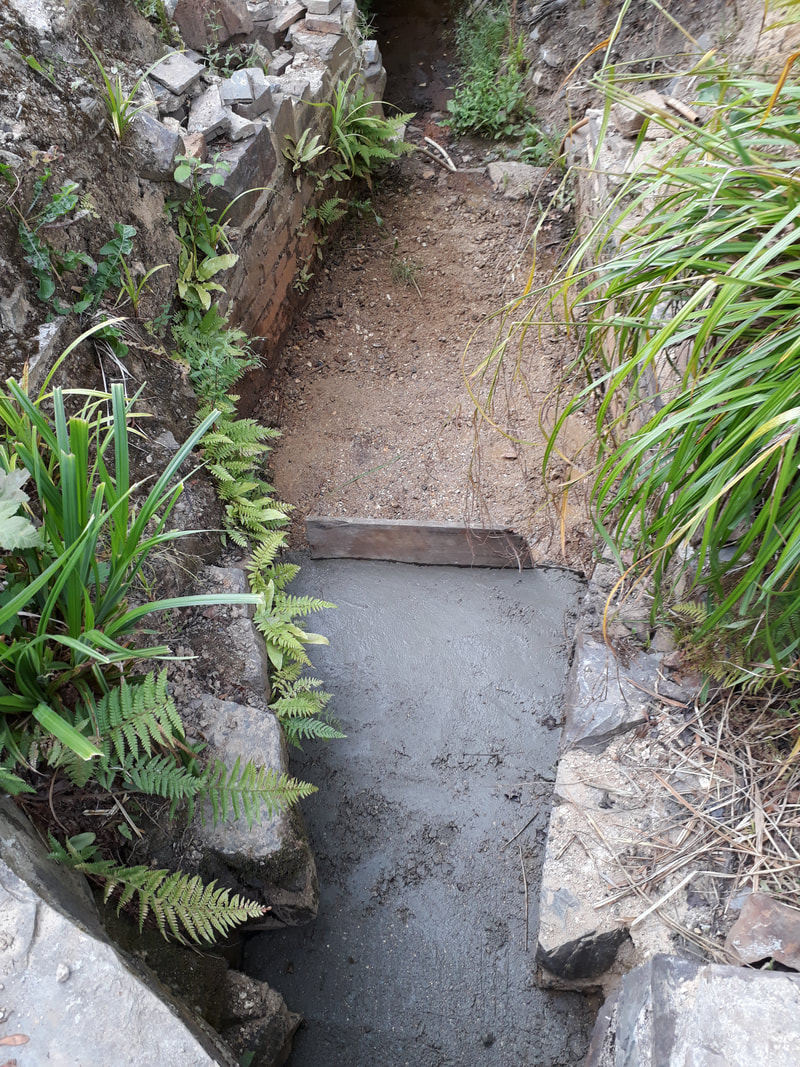 There are working parties at Rosemoor every Wednesday. All welcome! 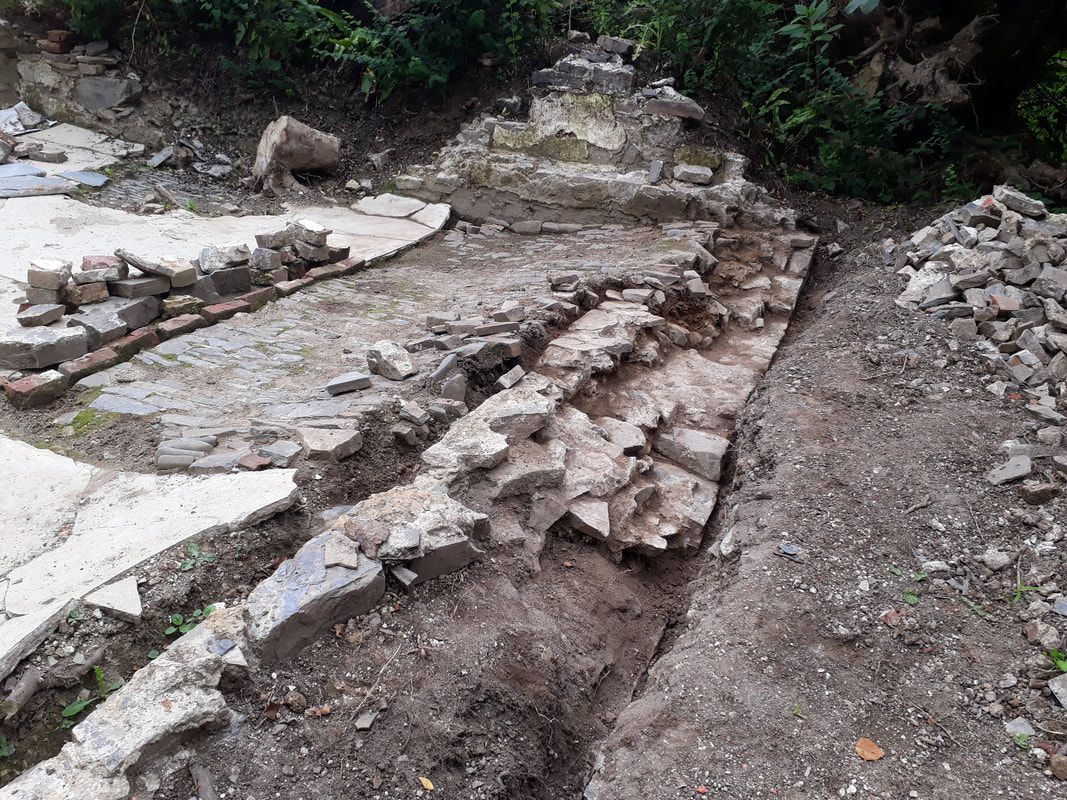 The programme of works at Sea Lock this Tuesday (July 26th 2022) was not dissimilar to that undertaken last week but without the accompanying thunderstorm. The weather on this day was bright, dry but started off quite cool which was ideal for undertaking heavy work. 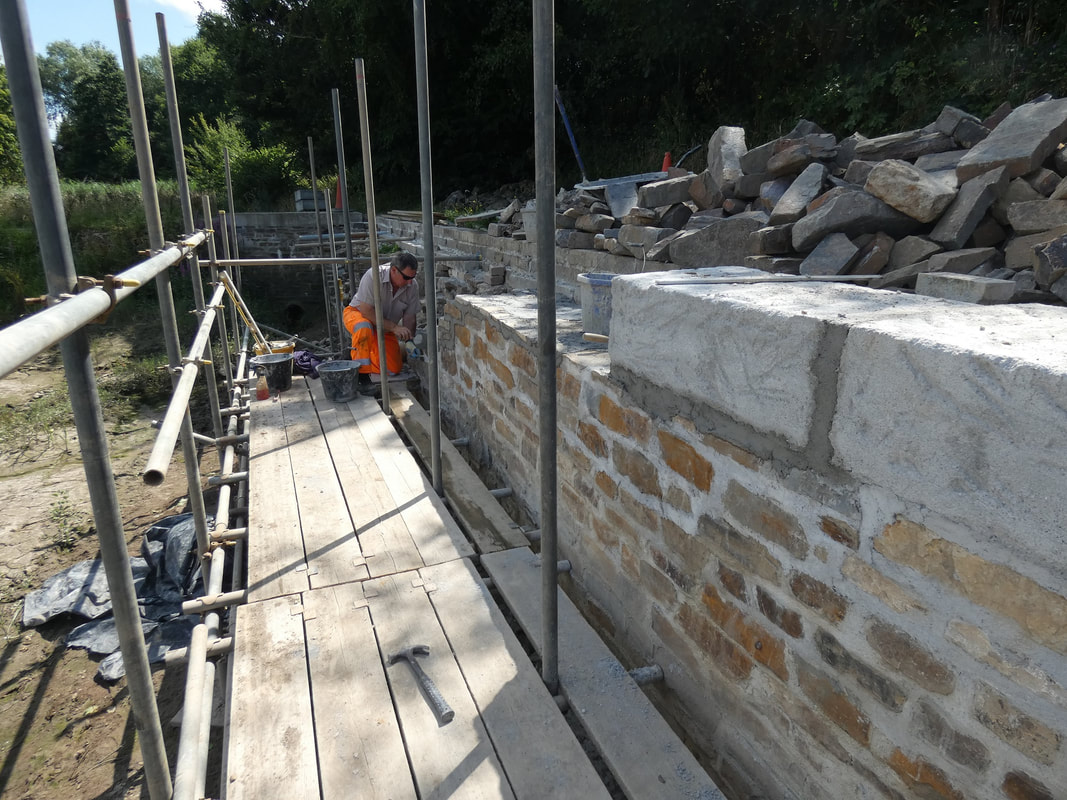 There were only 3 of us working on site but by the end of the day we had accomplished a great deal. Initially Nick and Steve set about levelling and mortaring into place a coping block that I had craned into place a few days before. Since this was the last block in stock I put together the shuttering for another cast but with a dwindling supply of grit sand we decided to postpone filling until I had replenished it. Steve and Nick then continued rebuilding the face of the wall up to the level for more coping stones.

​I got down in the mud (yet again!) and concentrated on extending the lower scaffold lift to enable rebuilding at that level to continue. By the time we had had enough Steve and Nick had built up a considerable length of finished wall which had consumed a lot of good facing stone but also due to the depth of the wall needing back-filling, an awful lot of infill.  Much of this Nick supplied from a pile of old concrete blocks which he took out his aggression on using a heavy sledge hammer. 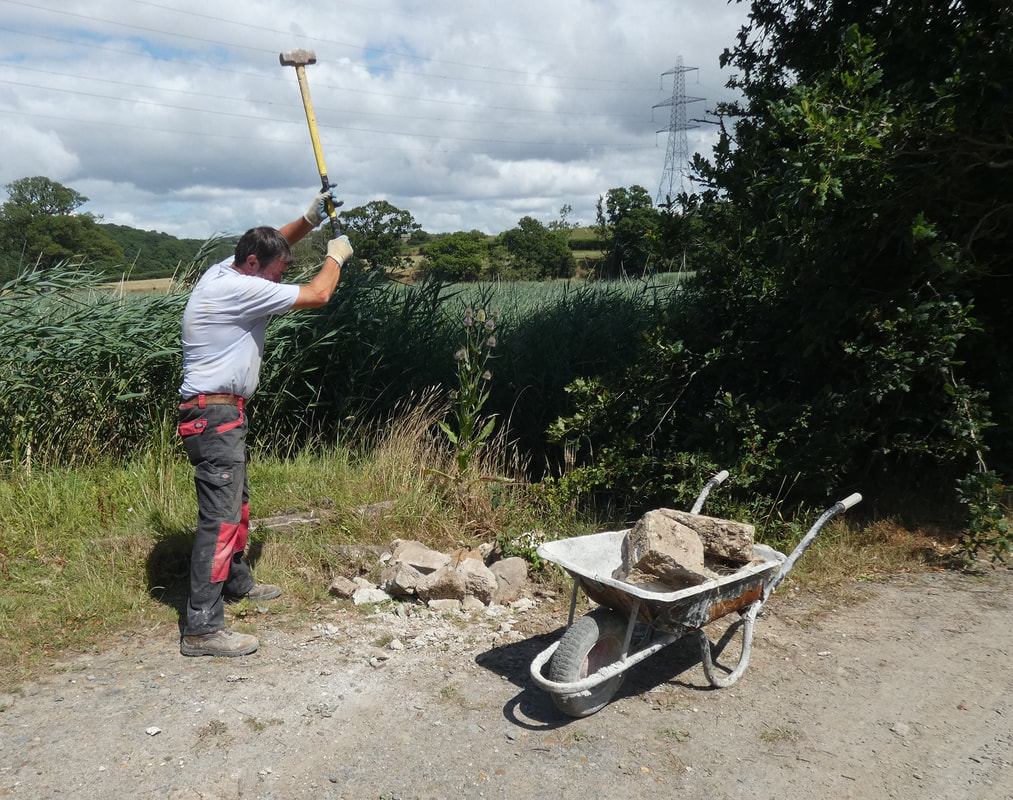 ​The next section of wall to rebuild is going to be quite tricky since there is little heart to fill just a thin layer of facing to replace which could prove to be a bit of a balancing act. Off to get more grit sand today.
ROSEMOOR RESTORATION REPORT by Tony Nicholls - 20th July 2022

After many weeks without rain, the water level in the canal has dropped dramatically as the photos of the upper and lower basins show. The upper basin is almost totally dry with a thin crust of earth covering the underlying mud whilst the remaining water in the lower basin has turned into an almost jelly-like substance. It may look unappealing but the working conditions are ideal so we are keen to take full advantage while the dry spell lasts. 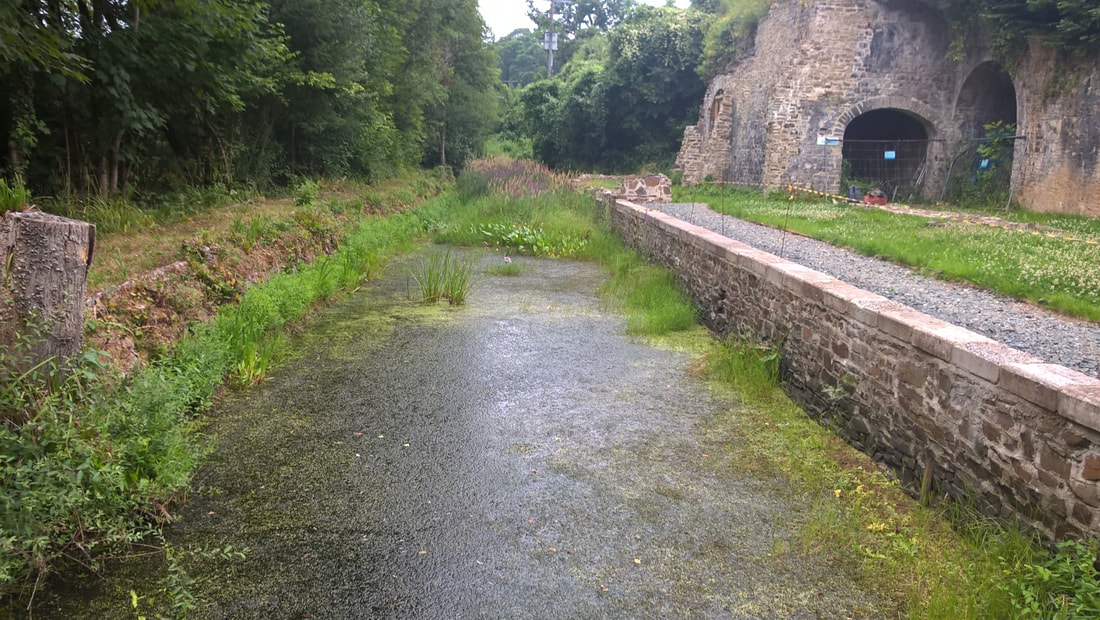 Lower basin
Work continued apace on raising the level of the upper basin wall and the team laid another 20 feet or so of stone this week. Weather permitting, we should complete this task in the next two to three weeks and will then consider whether capping off is required. 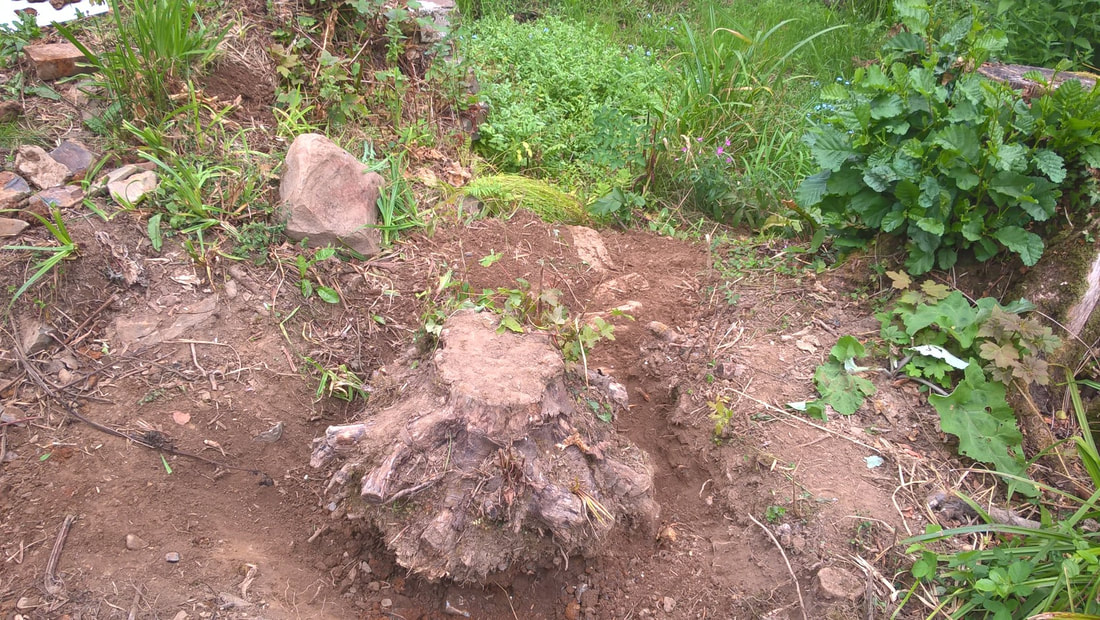 Stump in centre of possible drain 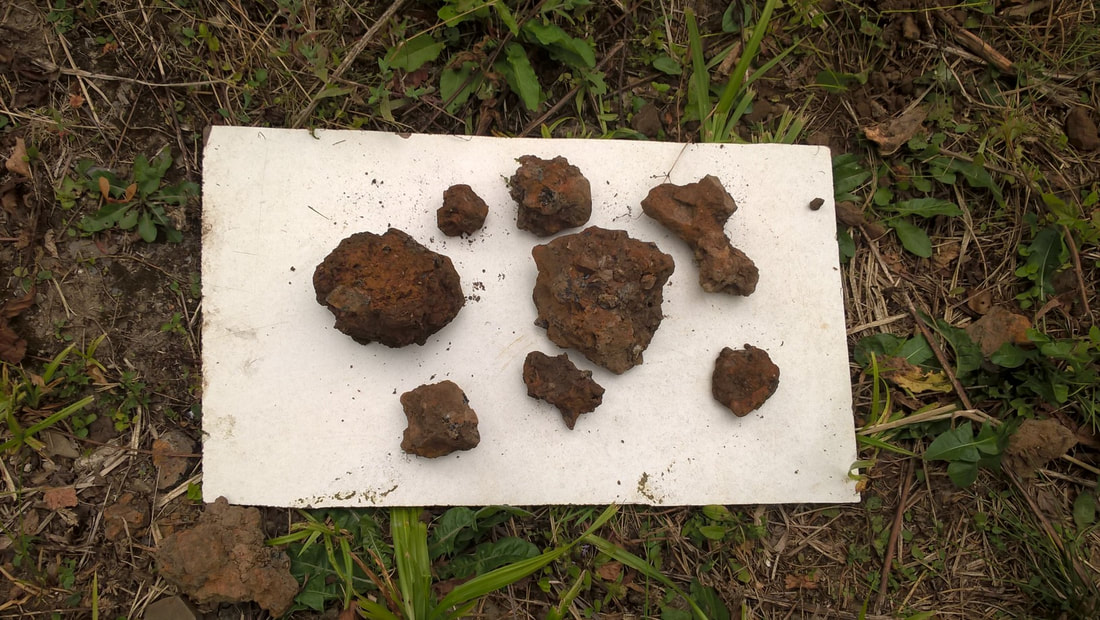 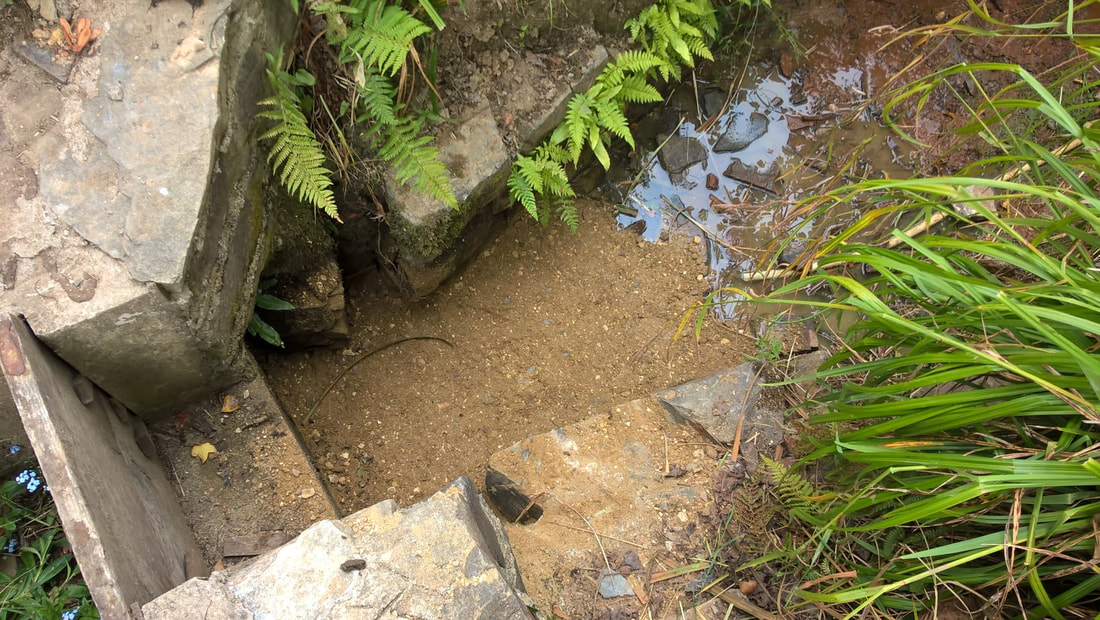 Preparing the bed of the mill race
Working parties are held every Wednesday morning, meeting in the main car park at RHS Rosemoor, Torrington at 9.30am. Please contact Project Manager, Ian Harrison (tel.01237- 475707) for more information. ​ 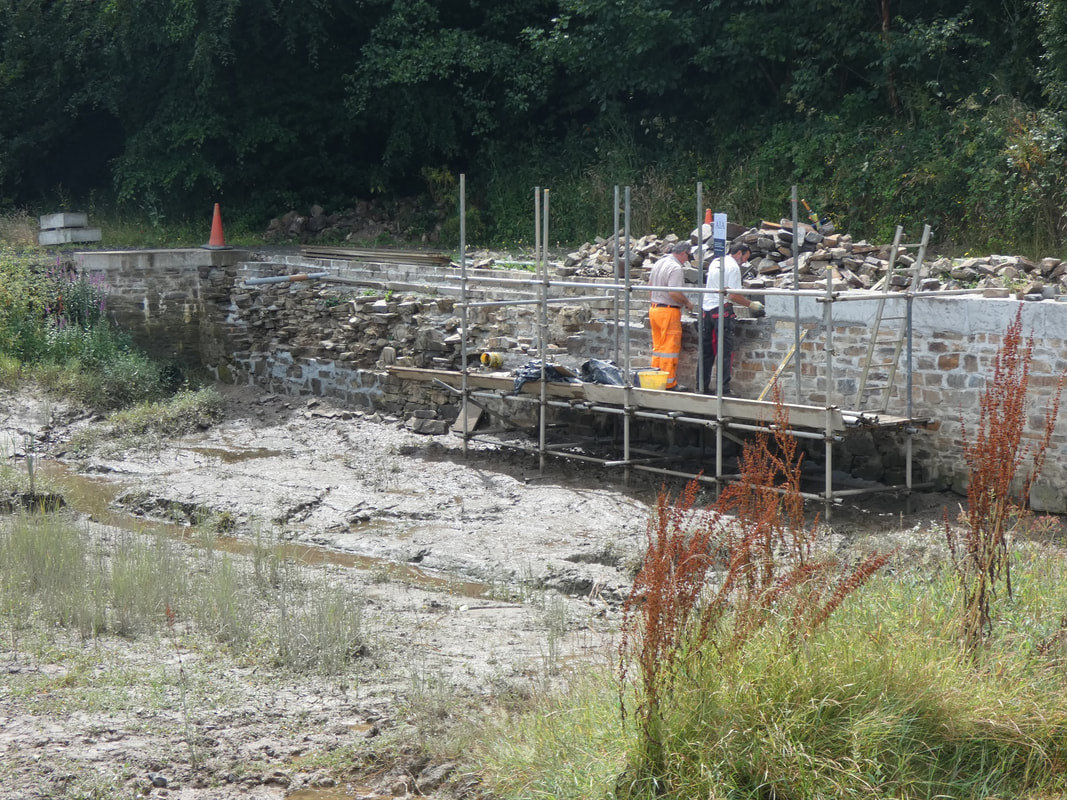 ​The rain soon stopped and we were able to resume work. Unfortunately the storm hadn’t finished with us and a little later more rain began to fall heavily and steadily. We decided to get under proper shelter and have an early lunch. At this point, Michael had to leave anyway as a result of another appointment.

Following lunch and a very welcome cup of tea, Steve, Nick and I, were able to resume work once again. By this time the storm had moved on to bother someone else, the sky cleared and the sun shone brightly. The temperature began to climb rapidly as did the humidity level.
​Our mortar was now drying fast, setting quickly and had to be kept wetted down. By mid-afternoon the temperature was making working uncomfortable and so we cleaned up our tools, covered the new masonry with plastic sheeting to prevent it from drying too fast and called it a day. On reaching his car Nick reported that its thermometer was reading an external temperature of 33ºC. But all in all it was a very satisfying day’s work and progress was obvious. 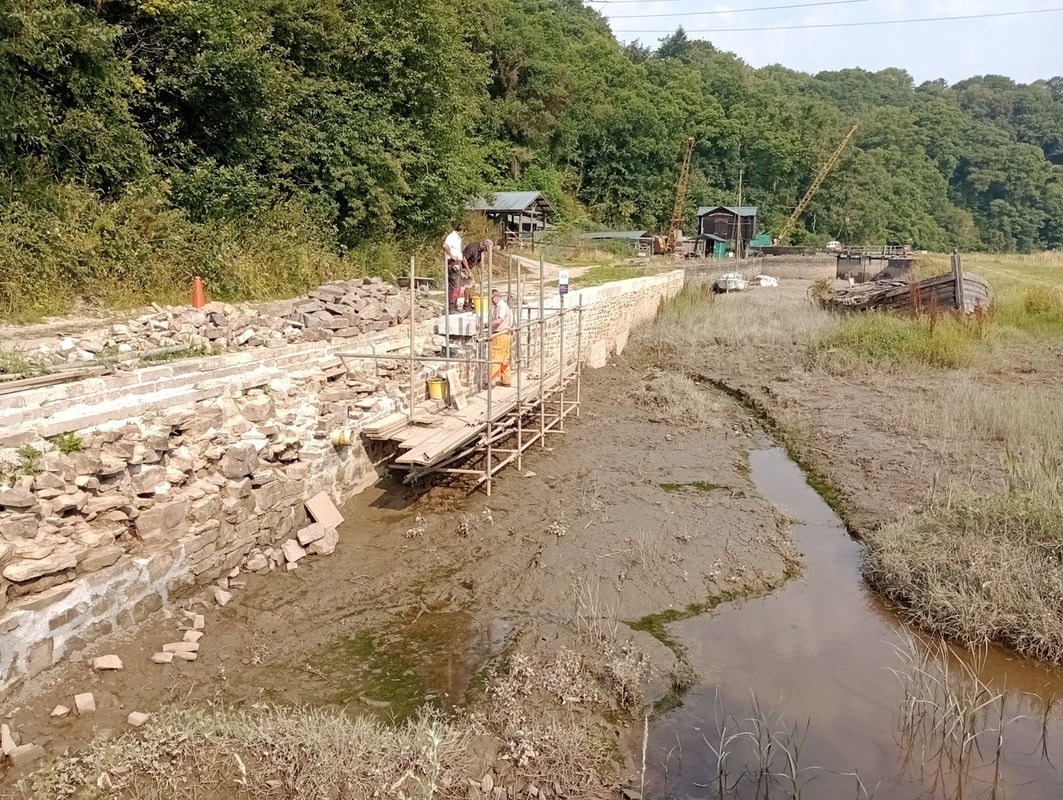 ​The next task is to collect another load of grit sand and then cast some more coping ‘stones’. One is still waiting to be laid, but another 11 are required to reach the end of the middle wharf section which is getting closer and closer!
SUBLIME TO THE RIDICULOUS or Vice Versa

Work at Sea Lock has been slightly intermittent over the past few weeks due to volunteers going on holiday (How dare they?) or having other more urgent commitments. However, progress is being made and is on course for speeding up dramatically.

On Tuesday June 5th, the work force was reduced to 2 of us. Steve and I concentrated on rebuilding part of the wall where a large drain pipe is situated. This pipe carries storm water down from the main road above and the hillside above that, so it is usually flowing, emptying out a considerable quantity of water. It was good to be able to work around it without the fear of getting our boots filled. 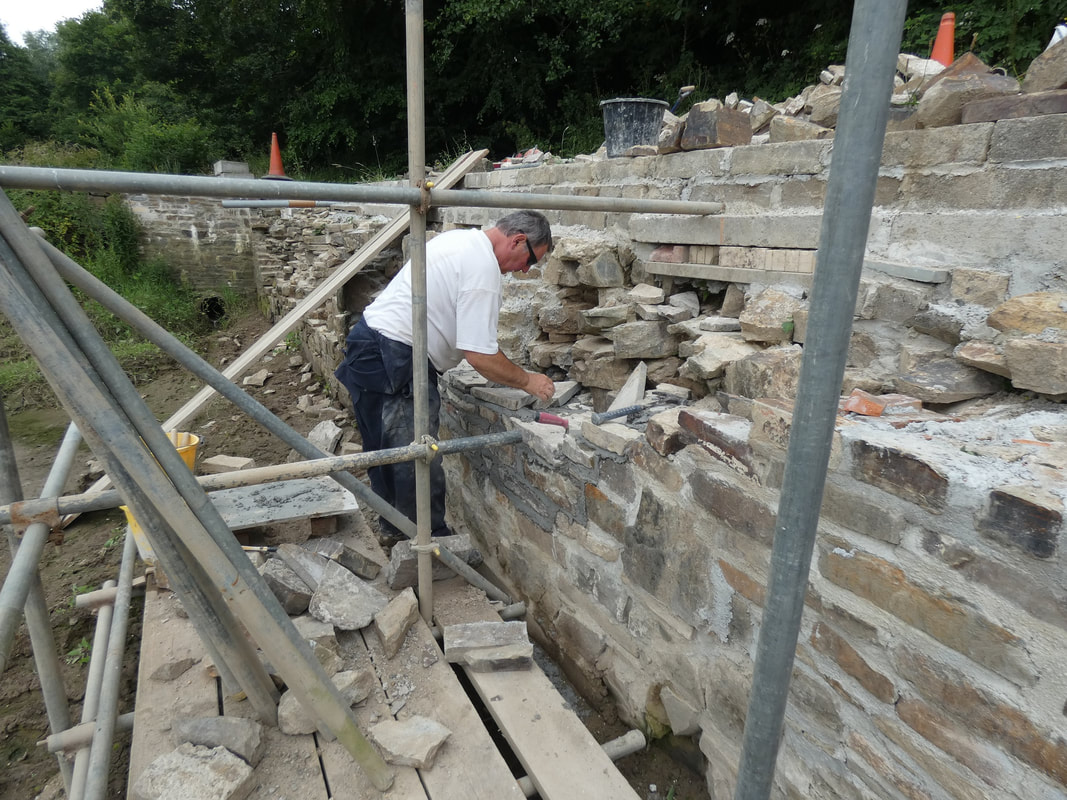 ​On Tuesday June 12th the work force had increased to 3 of us. Tony spent the morning standing on the mud, down in the middle wharf basin whilst he filled large holes between original masonry with new, fresh cement where he and Michael had previously raked out poor, crumbling mortar. The long dry period we have been experiencing, combined with very small tides, had allowed the mud here to dry and solidify so was quite pleasant to stand on as opposed to when it is usually saturated, extremely sticky and very slippery. 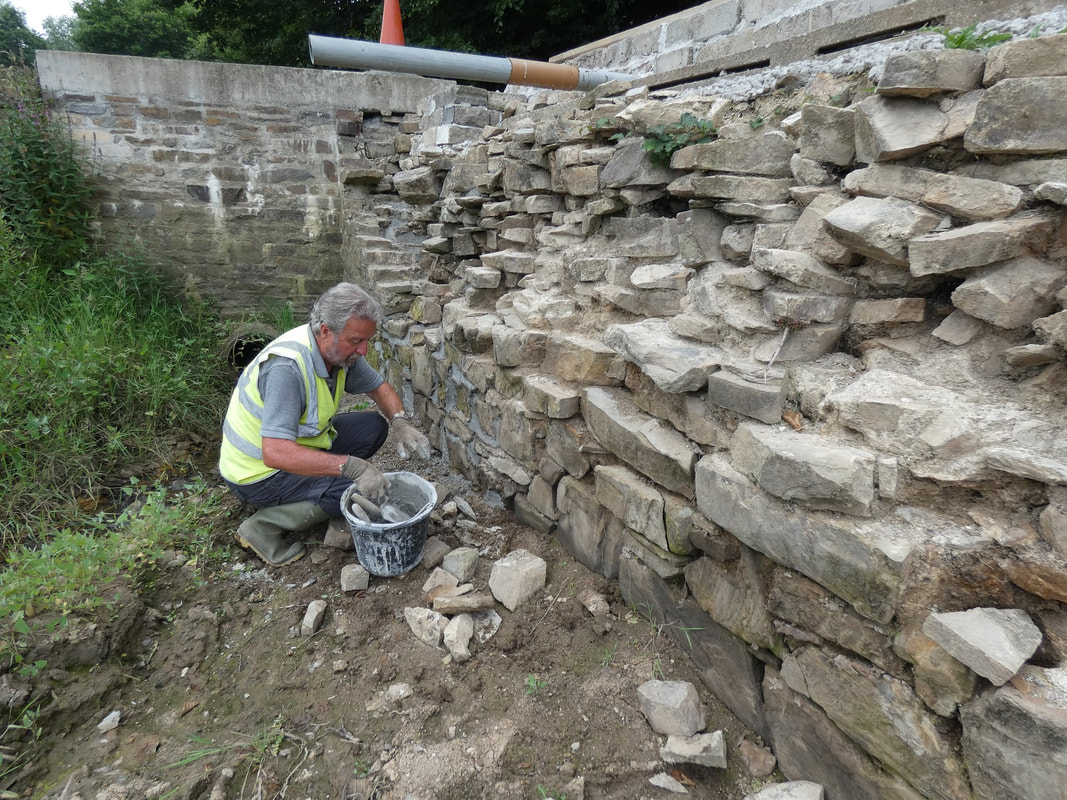 ​Nick and I spent the day levelling and mortaring into place another coping block which I had previously craned onto the wall. Having completed this we continued building up the wall in preparation for laying another coping stone. I have 2 waiting patiently to be laid in place but still need to cast several more.
​The facing stone we had was not very good and we were rapidly running out of what was suitable for that task. A visit to a quarry was necessary. My usual source still had nothing suitable although I had been promised that good stone would be sorted soon. Not soon enough, however!

On Thursday I ‘phoned another quarry where Steve’ and I had previously collected some good stuff. I was informed that there was some really nice ‘squarish’ stone presently available, but a very large order was about to be filled so if I wanted any of this I would need to get in asap.

Being unable to contact Steve or Nick for help, I managed to press-gang my neighbour, John, into lending me a hand. Our visit to this quarry could not have been any more diametrically opposite to the one that Steve and I had some time ago!

When John and I arrived at the quarry the atmosphere was very hot, dry and dusty whereas when Steve and I went, it was bitterly cold, the pile of facing stone was literally frozen solid to the ground and covered in a thick coating of ice. 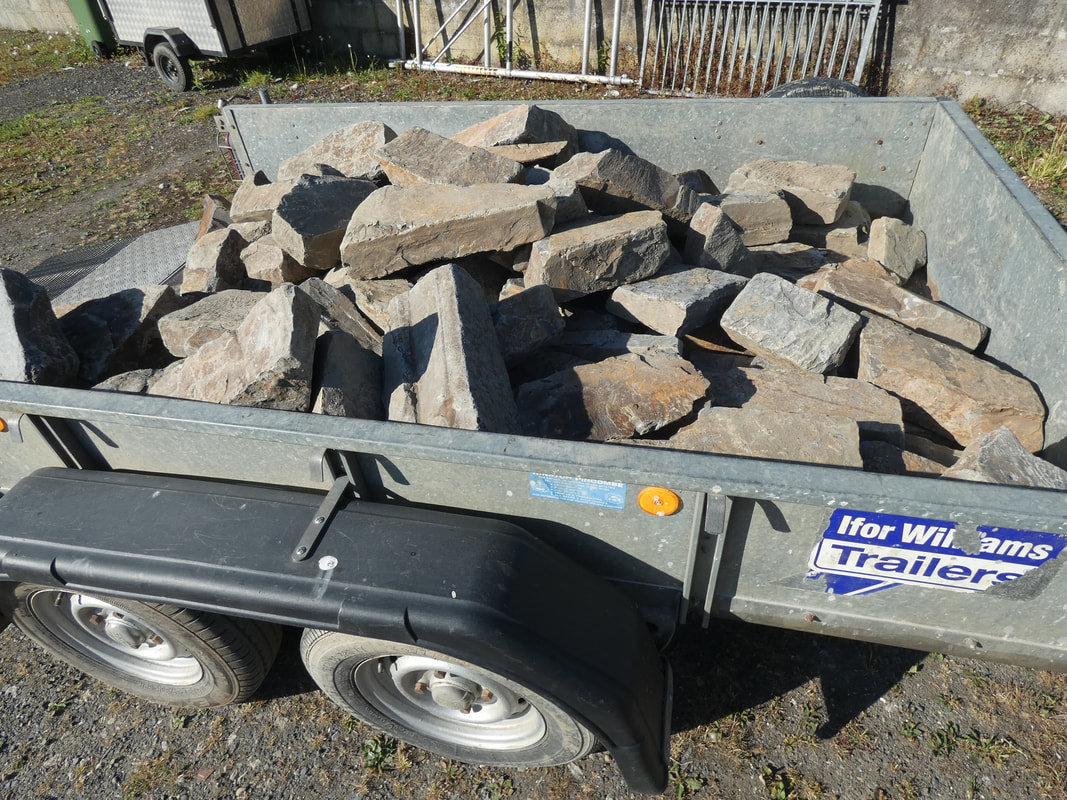 After the intense heat of the weekend, we were grateful for a cooler, cloudy day for our work at Rosemoor this week.

Work continued on raising the level of the upper basin wall and we have now reached the half way point. The stone we have been using is of such good quality that we are now debating whether we actually need to cap off the wall. The argument for capping off is that it would provide a consistent finish with the lower basin. It is important to remember that the upper and lower basins were originally one continuous pound. It is only the recent installation of the access bund which separates them. When this is removed it will be easier to decide whether capping off is necessary. 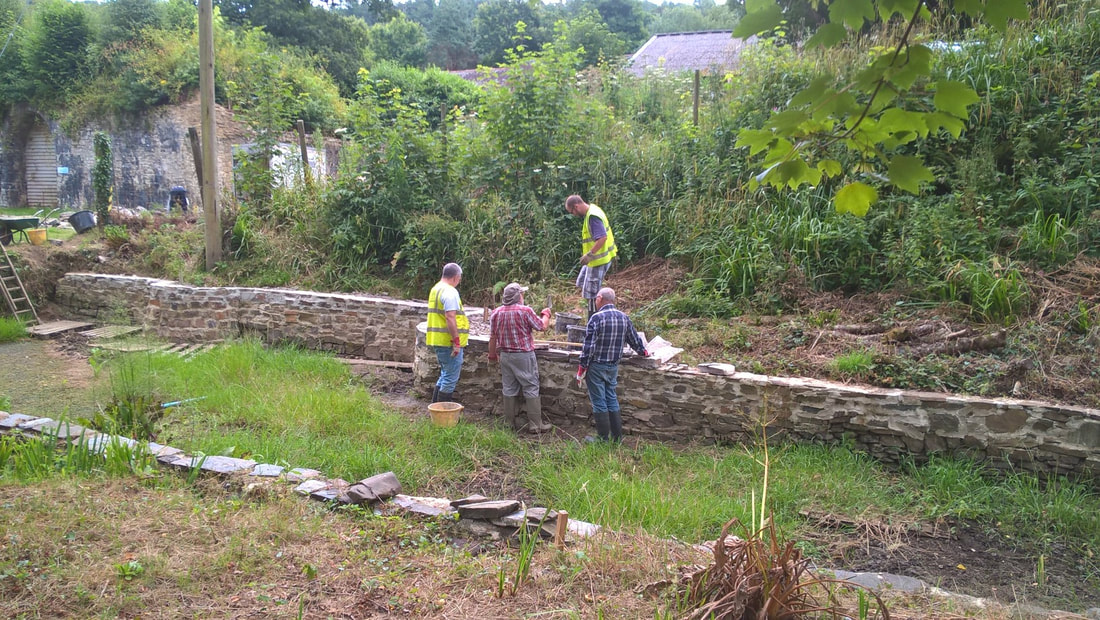 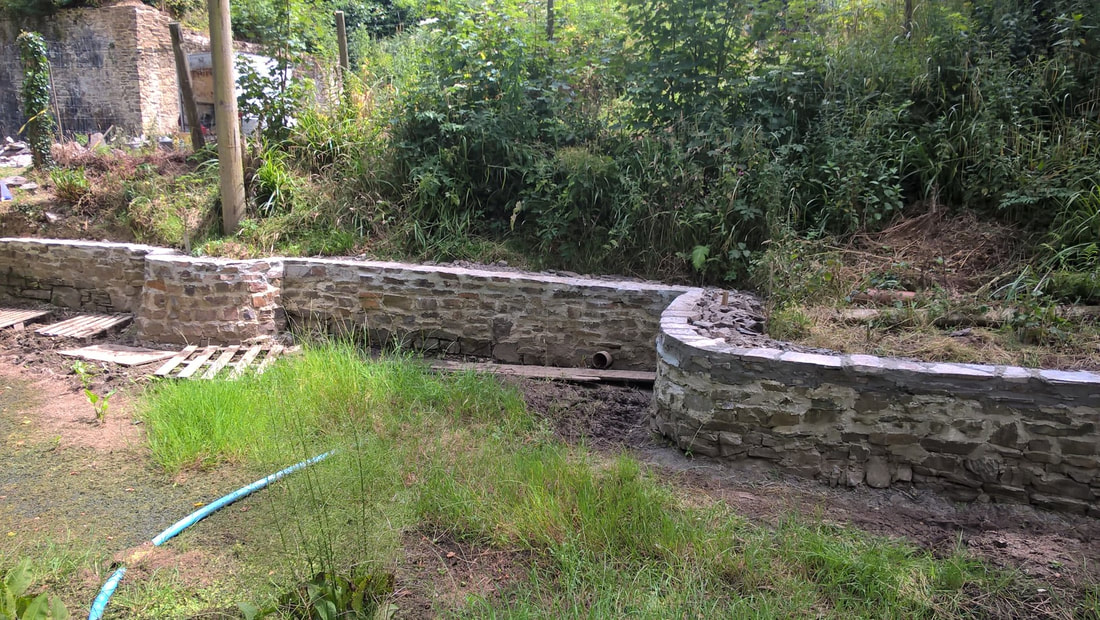 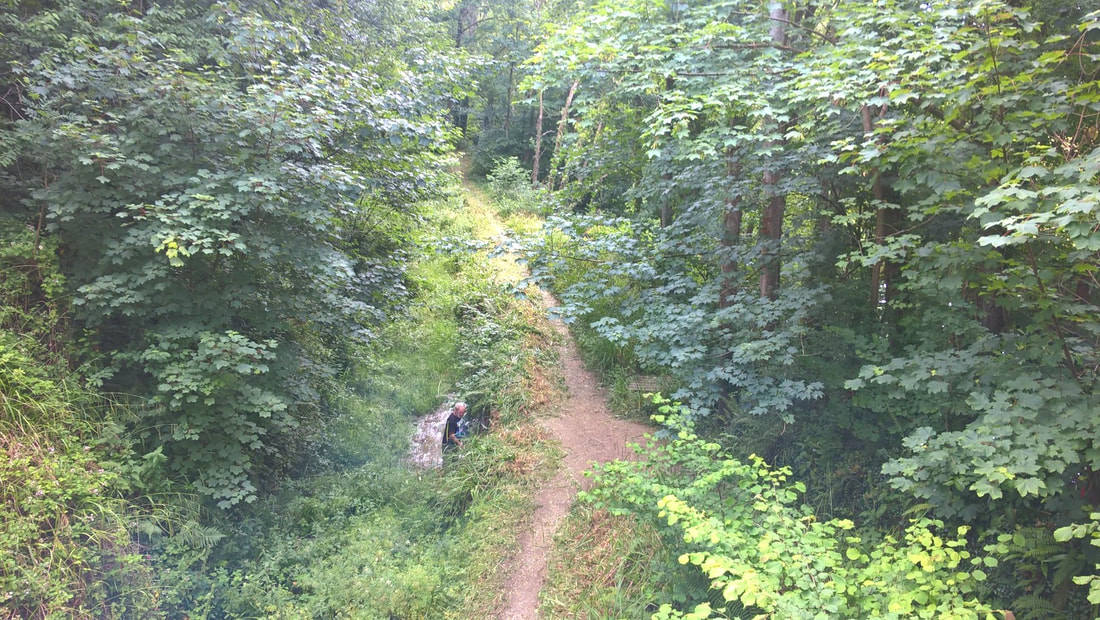 View of towpath from roving bridge 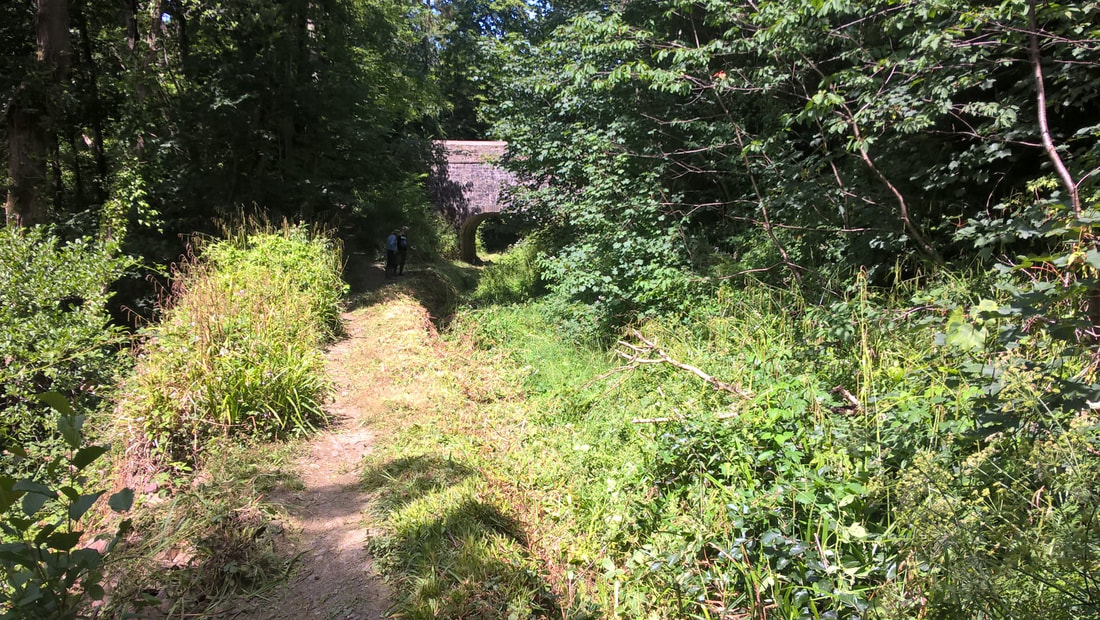 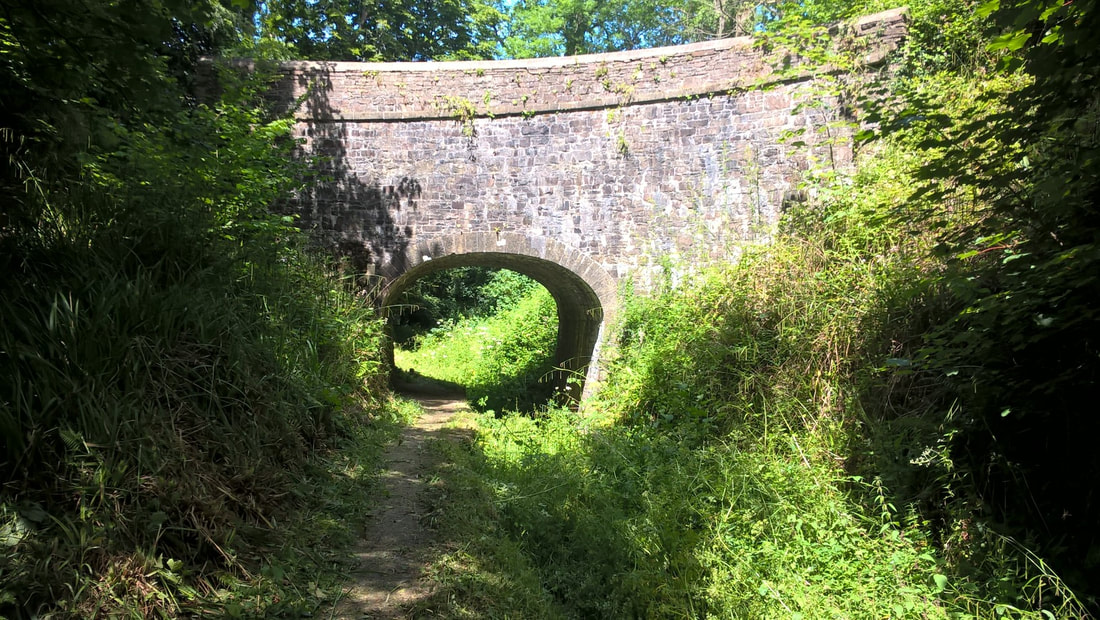 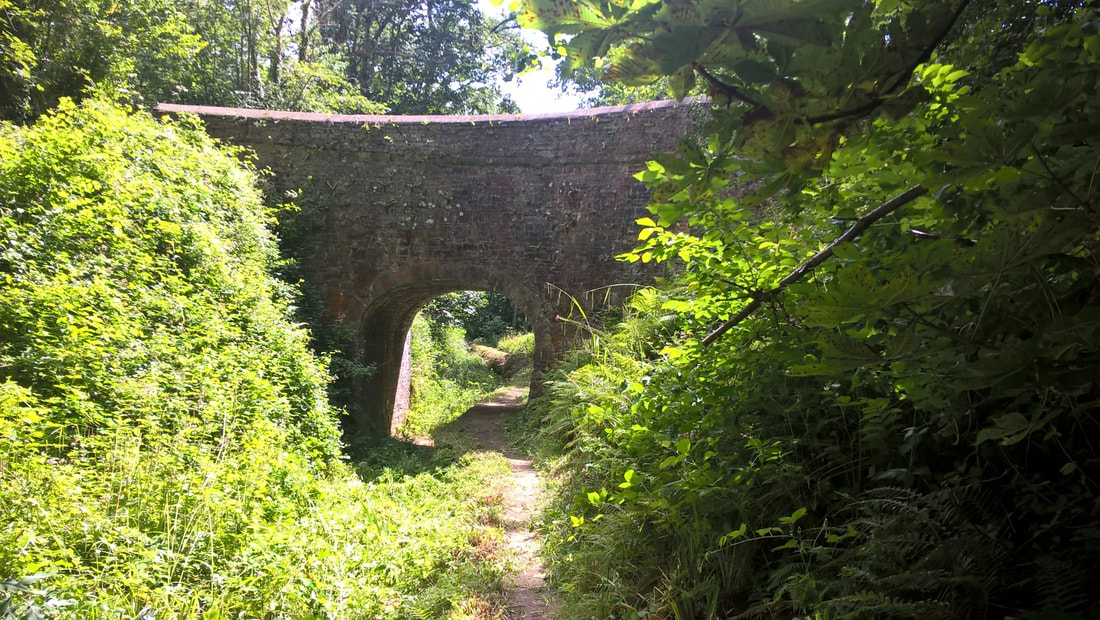 Roving bridge looking south
Finally, we cleared some of the creeper growing over the roving bridge itself to reveal at the base of the wall the grooves cut by the tow ropes as the horses traversed the bridge. This interesting feature highlights the purpose of the bridge which was to allow the towing horse to cross the canal where the tow path changes sides thereby obviating the need to unhitch the tow rope from the leading tub boat - a simple yet time-saving innovation. 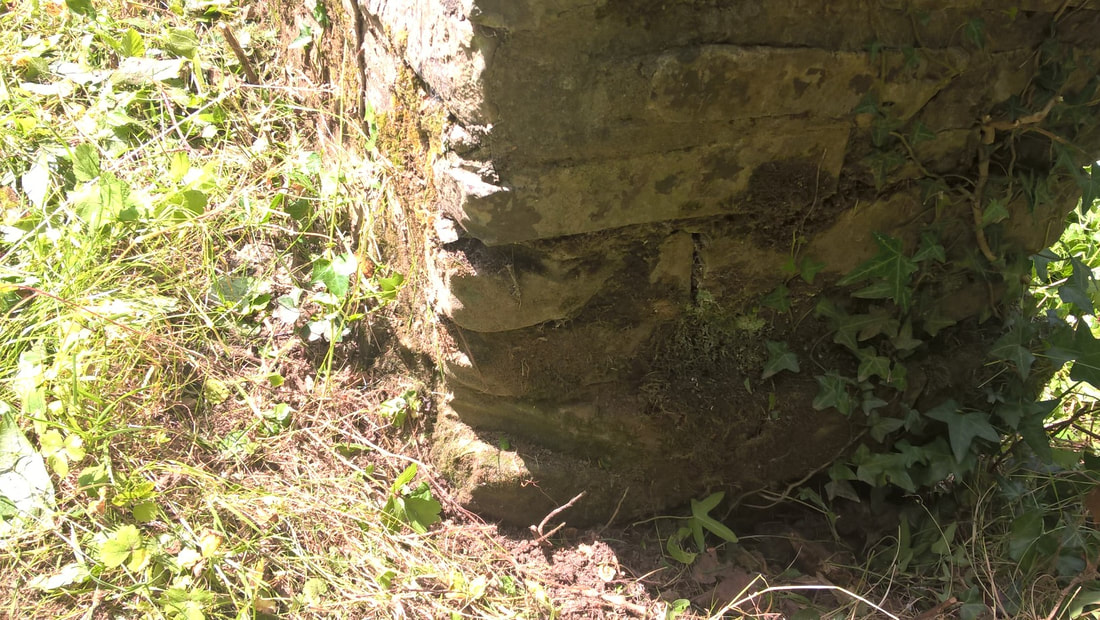