History of the Canal 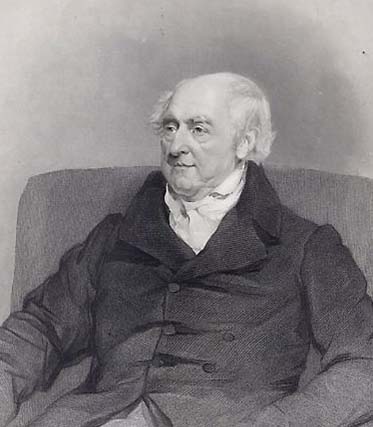 John, Lord Rolle
The Rolle Canal was a small inland waterway in North Devon running from a tidal lock at Annery  on the River Torridge (about three miles south of Bideford) to its terminus near Great Torrington – a distance of some 7 miles in total.  The canal was the brainchild of John, Lord Rolle, an aristocrat who owned or controlled vast areas of land in North Devon at the beginning of the nineteenth century.  He recognised that there was a need for agricultural lime to improve the fertility of the acidic soil of the region which would, in turn, greatly increase the productivity and profitability of his farmland.  At this time, most of the limestone used in North Devon was shipped in from South Wales together with the coal required to produce agricultural lime in the many lime kilns dotted around the coast and along the tidal reaches of the region's rivers.  At the beginning of the nineteenth century, there were few good roads in North Devon and those that existed were little more than rough, unsurfaced tracks.  This made them unsuitable for the carriage of heavy goods so the concept of a canal to transport such materials to the remoter parts of North Devon was eminently sensible.  In 1810 Lord Rolle had plans drawn up and commissioned the engineer James Green to design and build a canal through the Torridge Valley to the rural hinterland around Great Torrington.  James Green had recently completed the Bude Canal which ran from Bude to Holsworthy and he brought valuable experience and proven engineering techniques to the construction of the Rolle Canal.  Work commenced in 1823 and the canal opened in 1827. The canal was cut without the authority of an Act of Parliament – a legal prerequisite for such works.  The Rolle Canal Act was passed retrospectively in 1835 and safeguarded the rights of local people to access common land which the canal traversed.

The canal was fed from the waters of the River Torridge at Darkham Weir, a mile to the south of the canal basin at Rosemoor.  The weir had originally been constructed to create a leat to feed the mills at New Town Mills and a small tucking mill at Rosemoor (originally Rowe's Moor).  The leat was subsequently incorporated into the canal itself which then largely followed the contours of the river valley.  At the downstream end of the canal, ships laden with limestone and coal sailed up the navigable waters of the River Torridge to enter the tidal lock at Annery where cargoes would be unloaded and transferred into the small 'tub' boats used on the canal.  These were about twenty feet long and five feet wide and drawn by horse in strings of three or four boats linked together.  The boats were built with wheels in the underside to enable them to be hauled from the canal up an inclined plane – a solution James Green had used at various locations on the Bude Canal.  The inclined plane on the Rolle Canal was necessary to overcome the steep rise in the land between the tidal lock and the canal at its higher level at Ridd – an elevation of some 50 feet.  The inclined plane was an ingenious piece of engineering which used a water-powered winch to pull the tub boats up the slope on rails by means of an endless chain.  Part of the inclined plane and the remains of the building housing the original wheel pit are visible from the Tarka Trail¹.  The short stretch of the canal between the tidal lock and Ridd was once an important industrial area with small shipyards, potteries and brick kilns as well as lime kilns, one of which is extant and remains in good condition to this day.

From Ridd, the canal followed a sinuous route along the Torridge Valley crossing the River Torridge via a spectacular aqueduct at Beam.  The aqueduct is a superb piece of masonry construction some 270 feet long and 22 feet wide and was built to avoid a long loop in the river where the steep sides of the valley would have made construction difficult. The aqueduct has been illustrated in a famous engraving of 1830 by Thomas Allom which was dedicated to Lord Rolle.  It also features in Henry Williamson's Tarka the Otter in which the author refers to it as 'the Canal Bridge'.  300 metres upstream from the aqueduct is another interesting feature of the canal – a stone-built 'roving' bridge.  A small wharf was built on the canal at this point to serve the needs of Beam House.  This required the towpath to be moved to the opposite side of the canal.  The roving bridge not only provided access to Beam House, it also enabled horses to cross from one side of the canal to the other without being unhitched from the tub boats.  This is the only true canal bridge in existence on the Rolle Canal and was carefully restored in 2000 by Lord Clinton (a descendant of Lord Rolle).

From Beam, the canal ran along the side of Furzebeam Hill emerging at Staple Vale below the town of Great Torrington.  In the nineteenth and early twentieth centuries this was an important centre for local industry and goods such as wool, pottery, clay and timber would have been carried from here by tub boats on their return journey to the tidal lock and thence for export from Bideford which, at that time, was still a major regional port.  The canal then skirted the substantial hill on which Great Torrington sits and reached the village of Taddiport a mile further upstream.  This was where the Rolle Canal Company had its administrative headquarters, offices and storage facilities.  From here, the canal ran a further two miles to its terminus at Rosemoor where a wide basin was constructed to allow the strings of tub boats to be unloaded and turned around for the return journey.  Here, Lord Rolle authorised the construction of one of the largest lime kilns in North Devon comprising an impressive five-pot structure.  Limestone was offloaded from the tub boats into small wagons which were then hauled on rails up a ramp to the top of the kilns.  The limestone was then carefully packed in layers into the 'pots' prior to firing.  The size and scale of the kiln complex gives a clear indication of the importance of the limestone trade to North Devon during this period.  The canal operated successfully until it was superseded by the railway (a branch line of the LSWR) in 1872.
​
The Tarka Trail is a long distance cycle and walking trail which follows part of the route of the canal and, latterly, the railway between Bideford and Great Torrington.