The Inclined Plane at Ridd is where the level of the canal had to be raised 42 feet to the same level as the Torridge upstream of Torrington.  Rather than using a series of locks as on larger canals, James Green employed the method he had pioneered on the Bude Canal with an Inclined Plane where the small Tub Boats, which had wheels fitted in their bases, were dragged up a ramp on rails pulled by a chain powered by a water wheel set into an underground chamber at the top.  This feature was almost obliterated when the railway was built at a level which cut right through the top of the plane, but part of the soffit of the wheel chamber can still seen in the bank alongside the Tarka Trail.
What is an inclined plane?
In waterway terms an inclined plane is a device for raising and lowering boats between different levels of canal by hauling them up or down a slope or ramp constructed for the purpose.  There are none currently operating in the U.K., but at the height of the canal age in the 19th century many canals used inclined planes rather than long flights of locks.
When was it built?
The Rolle Canal was built between 1823 and 1827.  It operated until 1872 when its route was used to accommodate the new railway between Bideford and Torrington. The railway in turn closed down in 1982 and was subsequently converted into the long distance cycle and walkway known as the Tarka Trail.  From the Trail, some features of the canal, including traces of the Ridd Inclined Plane can still be seen.
Why was it built?
Since any length of canal can only run on the level, wherever places at different heights are to be linked some means is required to raise boats from the lower to the higher level, and vice versa, without the water running away in the process.  In the case of the Rolle Canal, the river Torridge upstream of Torrington is some 43 ft. higher than the highest tide level where the canal joins the estuary at the Sea Lock, so it was necessary to accommodate this change of level in the building of the canal.  It was decided to construct one inclined plane rather than a series of canal locks because in the steep sided Torridge valley, subject to alternate flooding and periods of low flow in the river, this enabled the canal to be sited well above the flood plain, while economising on water usage and improving efficiency of operation.
How did it work?
The Rolle Canal was primarily used to transport heavy bulk goods such as coal and limestone upstream and clay for pottery back to the coast. The small heavily built craft used for this purpose were called Tub Boats; they were about 5'6" wide and 20' long and were fitted with iron wheels.  These wheels enabled them to run on iron rails that were set into the surface of the inclined plane. There were two sets of rails so that tub boats could ​be pulled up and lowered down the slope at the same time by a continuous chain running on enormous pulleys at the top and bottom.

​Where was it?
About half a mile upstream from Annery Kiln, near Weare Giffard, the Torridge winds close to the west side of its valley where another lime kiln and cottages, no doubt once belonging to the Ridd family, were built into the valley side. Here a small stream from near Annery House, Monkleigh, joins the main river and provided a convenient site for the canal engineers to build the inclined plane rising from the low level canal in the water meadows to the high level canal in the valley side, behind and above the cottages.
What can we see now?
The railway that destroyed most of the Rolle Canal was built along the course of most of the upper level of canal and actually a little lower than the canal bed itself.  Consequently the railway track cut into the top of the inclined plane, destroying all the workings of the lifting mechanism, while its embankment obliterated much of the slope of the plane itself.  The stone lined chamber which housed the water-wheel and the gearing was filled in with rubble, almost up to the vaulted roof which was part cut away while the rest of it survives under the hedge bank alongside the Tarka Trail which now runs on the railway track.
​No working drawings of the water wheel and drive mechanism, or even of the layout of the incline and canal basins, are known to be in existence.  However we do have copies of two very old dark photographs showing tub boats in the basins at Ridd, and these confirm the theories as to its operation.  More useful is the fact that the Bude Canal, built by the same engineer, James Green, has an inclined plane at Merrifield that, although long derelict and without machinery, is structurally almost complete.  An excellent isometric drawing of the underground wheelpit of the Merrifield inclined plane has been produced for the Bude Canal and Harbour Society.  who have permitted us to reproduce it here to illustrate this account of the Ridd inclined plane. 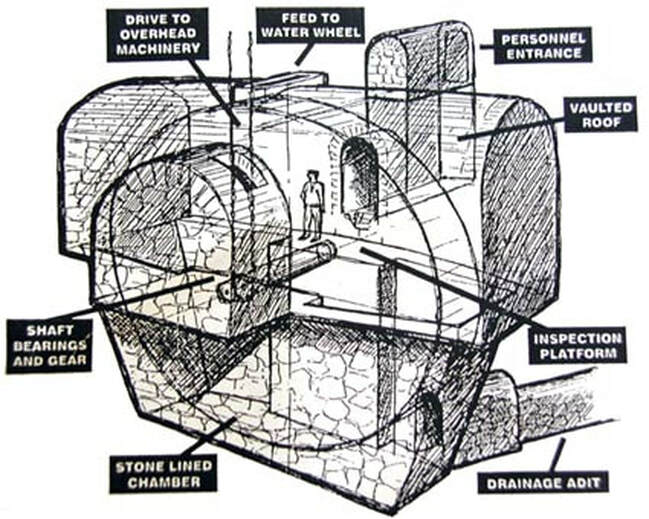